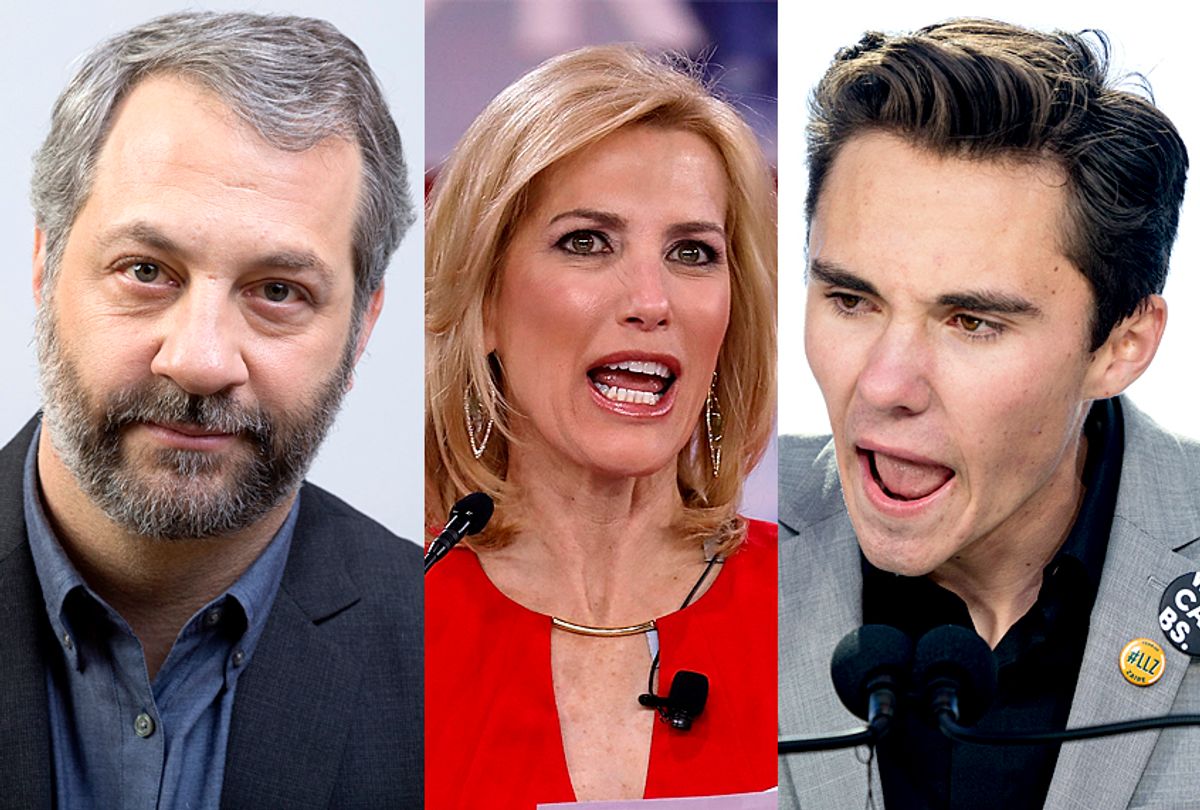 UPDATE: Fox News sent this statement to Salon regarding the Laura Ingraham controversy:

Laura Ingraham’s very personal, on-the-ground commitment to the plight of impoverished and abandoned children—specifically in Guatemala— speaks for itself. So too does her strong belief in a commonsense, legal immigration system, which will continue to be a focus of her show. FOX News will never tolerate or give in to attempts to silence diverse viewpoints by agenda-driven intimidation efforts.

Taking a page from the right-wing playbook used to discredit the Parkland school student protesters, prominent white nationalist sympathizers rushed to Fox News this week to downplay the heart-wrenching images of children being ripped away from their parents at the U.S.-Mexico border.

During a segment discussing Trump's family separation policy on Monday, Fox News' Laura Ingraham tried to downplay the trauma inflicted on the children by the new policy by comparing the wired cages children are detained within to "summer camps":

Consistent with American law, when a party is arrested, your children are either sent to relatives or they become wards of the state. So since more illegal immigrants are rushing the border, more kids are being separated from their parents and temporarily housed in what are essentially summer camps.

Fox News commentator Tucker Carlson created a false dichotomy on Monday when he argued that Democrats and others concerned about the welfare of immigrant children were betraying a preference for "foreigners" over citizens of their own country:

Do you think these people really care about family separation? If they did, they'd be worried about the collapse of the American family, which is measurable and real. But they're not worried about that. In fact, they welcome that collapse because strong families are an impediment to their political power. And that's why they're always lecturing you about the patriarchy and the evil of the American family. . .

This is one of those moments that tells you everything about our ruling class. They care far more about foreigners than about their own people.

Dropping any pretense about securing the nation's borders, another right-wing commentator appeared on Fox News to tell viewers that crying children shouldn't be believed because they are child actors.

"These child actors weeping and crying on all the other networks 24/7 right now? Do not fall for it, Mr. President. I get very nervous about the president getting his news from TV," Ann Coulter said on Fox News on Monday. She proceeded to falsely claim that she knew they were being coached from The New Yorker.

Unsurprisingly, the network's egregious defense of the Trump administration's policy of separating families has drawn ire.

Parkland shooting survivor David Hogg, a teenage gun control advocate who called for an advertising boycott of Ingraham's Fox News show after she attacked him, suggested a second boycott on Tuesday:

Near the end of her program, Ingraham acknowledged the outrage and attempted to walk back her remarks:

Apparently there are a lot of people very upset because we referred to some of the detention facilities tonight as essentially like summer camps. The “San Diego Union Tribune” today described the facilities as essentially like what you would expect at a boarding school. So I will stick to there are some of them like boarding schools. And I suggest that a lot of the folks who are worried about that spend more time in Central America. I have. And we should make adoption easier for American couples who want to adopt these kids.

Still, many of Fox's artistic talent has noticed this and is publicly denouncing the news network's enabling of stories that attempt to justify traumatizing children:

Earlier today, my colleague Amanda Marcotte wrote a fascinating editorial which explained why Republicans have been flailing around for excuses to justify President Donald Trump's new policy of ripping immigrant children away from their parents. After listing several of the arguments that they have used — from blaming Democrats (not true), claiming the policy doesn't exist (also not true) or that it is a deterrent (hard to say, but certainly a vile reason if it is true) — she made a point that really cuts to the core of what's actually going on here:

Why so many often conflicting lies and rationalizations? The answer is simple: Right-wing pundits and politicians are experimenting, in real time, generating a flood of excuses for Republican voters to latch onto. They know that eventually one story will gain traction and become the official go-to excuse that conservatives can use to justify their support for this vile policy.

Yet another example of what Marcotte referred to as the right-wing's messaging "experimentation" was offered by Rush Limbaugh, who tried to distract from the issue: Claiming that the crisis was entirely manufactured.

This children and families being separated at the border? It is an entirely manufactured crisis. It’s entirely manufactured. This has been going on for years. It happened during the Obama administration. Nobody said a word about it, primarily the media. Some might say, “Well, that doesn’t excuse it continually happening.” You gotta keep it all in perspective, and wait ’til you understand why. This is all about asylum seekers, folks. It’s all about people attempting to invade our country, not emigrate here.

The bottom line here is that, because Republican politicians and media commentators know the policy of separating immigrant families has devastating optics, they are desperate to come up with a plausible way of turning the narrative to their advantage. The methods being used here are classic logical fallacies, ranging from whataboutism and deflection to outright lying.

In order to combat this, people who support the rights of children need to recognize that a certain segment of the population is going to be hoodwinked by one, some or all of these messages because, well, they want to be. Their opinions cannot be swayed, but the rest of the country can still recognize what is right in front of their faces and denounce it accordingly.

Why extreme conservatives are hypocritical on immigration issues.