Gun-toting rally-goers will demand that Texas defend the rights of a persecuted group: armed teachers 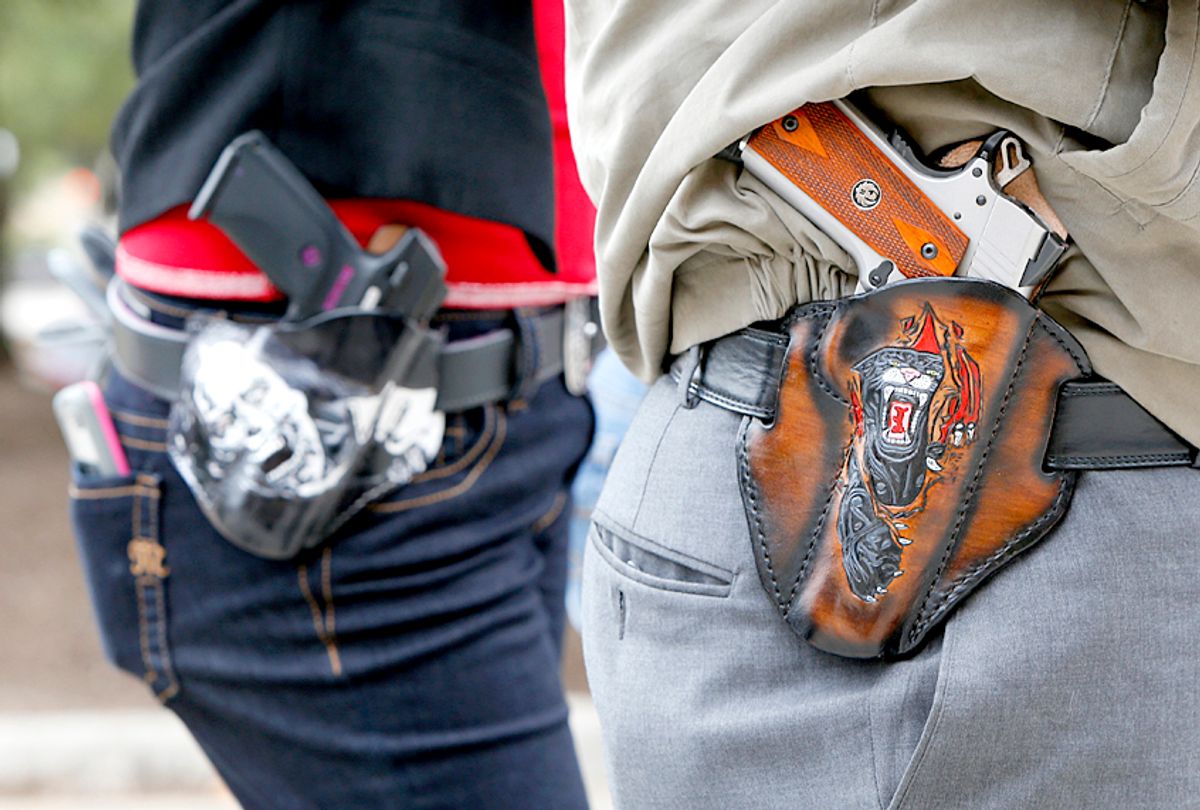 While it fell out of the endlessly hectic news cycle a lot faster than the school shooting in Parkland, Florida, the May school shooting in Santa Fe, Texas, was a similarly traumatic event for the city and the other Houston-area towns near it. Ten people died and 13 others were wounded when 17-year-old Dimitrios Pagourtzis opened fire in the local high school, a horror show that sent reverberations across a state notorious for the ease in which people can buy guns.

Now a group of far-right protesters, with the groups Open Carry Texas and This Is Texas Freedom Force, are holding an "open carry" gun rally on Saturday near Santa Fe High School, where the mass shooting took place. Calling the event "Carry For Our Kids," organizers are claiming that the only way to protect kids in schools is to allow teachers to carry guns, even with very little training and without permission from the school districts that employ them.

“Right now we’re a ‘may I’ state instead of a ‘you shall’ state," complained Brandon Burkhardt, head of This Is Texas Freedom Force, in an interview with Salon.

To be clear, Texas already allows teachers to carry guns, either through the school marshal program, which requires 80 hours of training by law enforcement, or through the more commonly used school guardian program, which drops the 80-hour training requirement and only requires a teacher to get written authorization from the school. Most school districts in the state, however, have opted out entirely from letting any teachers carry guns.

"We want to eliminate the superintendent and the school board decision on that," Burkhardt said. Instead, he suggested, all schools should adopt the "guardian" standards, which could mean as little as five or six hours of training would be necessary for a license to carry in Texas.

“We don’t believe schools should have that authority because our constitution doesn’t give schools that authority,” C.J. Grisham, the head of Open Carry Texas, told Salon. “We want to make it so the school marshal program is mandatory, not voluntary for the school districts.”

When asked why he thought school superintendents might want to bar teachers from carrying guns, Burkhardt suggested it was because they are "left-leaning or liberal-leaning" and imposing their "personal views" on teachers.

As with most of the rallies held by these two organizations, the plan here is for an event where men stand around with flashy weapons on display, though the Facebook event page asks participants to wear street clothes and not "full battle rattle," meaning the tactical gear and military-style camouflage that far-right groups sometimes adopting in street demonstrations.

When asked about the people who balk at this display on weaponry near the site of a recent gun massacre, Burkhardt was dismissive.

“Most of those people don’t even live anywhere near the area," said Burkhardt, who lives in San Antonio. (Which is roughly 200 miles from Santa Fe.)

"I think openly carrying firearms through the streets of a community that was just home to a horrible and senseless tragedy is incredibly insensitive and potentially dangerous," Michelle Huntley, who lives outside Houston in a town right near Santa Fe, told Salon.

Huntley, who helped start a Houston-area chapter of Moms Demand Action for Gun Sense, added, "These extreme tactics just reflect how extreme the priorities of this organization are."

There might be other reasons than hostility to opposing viewpoints, however. While Grisham and Burkhardt are positioning themselves as sober-minded, concerned citizens who just want to help kids stay safe, both have a history of provocative public behavior.

The same day that white supremacists flooded Charlottesville, Virginia, last summer to protest in favor of a Confederate memorial — leading to a riot in which one anti-racist protester was murdered — Burkhardt led a similar protest in San Antonio in favor of keeping up a memorial to the Confederate Army. His group was shielded by the Three Percent militia, a far-right anti-government group tracked by the Southern Poverty Law Center.

Prior to that, the group held an event in Houston to "defend" a statue of Sam Houston from what they said was a threat from the "Black Panther Party" and "antifa," saying that "these communist punks are embolden [sic] after they lay claim to a win in New Orleans by bringing down the Confederate monuments."

The problem? No one, communist punks or otherwise, had any designs on tearing down the Houston statue. The whole thing was a hoax, widely debunked by local media before the rally took place. Rather than cancel the event, rally-goers spread rumors on Facebook that they had seen antifa in the nearby bathrooms, thereby "proving" that there was a nefarious plan to destroy the statue.

Grisham in particular has a history of provocative behavior and violent rhetoric. Last year, he posted in support of the militia group that took over the Oregon wildlife refuge, declaring that the law enforcement officials who killed armed militiaman Robert “LaVoy” Finicum "should all be lined up and executed."

In 2016, he posted on Facebook that he planned to wander around the South by Southwest festival in Austin carrying a rifle, noting that President Barack Obama was speaking that day. "This may get interesting," he wrote.

Grisham appears to frequently trawl around Texas cities carrying with a visible rifle. If local police ask what he's up to, he starts recording video of himself yelling about how he's being oppressed. He has been arrested at least twice for these stunts, once in 2013 and once in 2018. In the former case, he was found guilty of interfering in police duties, but charges were recently dropped in the latter case. His site, however, still has a petition insisting that Texas law enforcement "drop all charges against CJ Grisham" and that "all government employees involved in the abuse of gun owners be permanently banned from government employment."

During the phone call with Salon, the Parkland students who have protested in favor of gun control inevitably came up.

"The students who believe in expanding gun rights and protecting schools, their voices aren’t being heard. They’re being silenced," Grisham said.

(One Parkland student who has spoken up in favor of expansive gun rights, Kyle Kashuv, was invited to meet Donald Trump for a photo shoot in the White House.)

Grisham hinted that the upcoming rally will feature students from Santa Fe speaking out for arming teachers, against the school board's will. But when pressed on the details, he became cagey, saying, "We’re not publicly putting them out because we’re protecting them," adding that "these are kids," and arguing that they can't handle the harassment that follows speaking out in public.

Without prompting, Grisham appeared to realize this argument didn't make sense in light of the highly public profile of Parkland students like David Hogg and Emma Gonzalez, who have been publicly harassed for months for speaking out in favor of gun control.

"Our side doesn’t have the liberal support network for those kinds of things," he said, saying the Parkland students are "protected" because "they got money up the wazoo. They’ve got bodyguards."

“We on the gun-rights side don’t have a lot of activist support," he said, adding that the NRA doesn't count because that "is not an activist organization."

Grisham said that his group had advertised that students from Santa Fe would attend a rally in Austin on June 2, and that the kids in question had been harassed, which is why he's so protective of the identities of the kids he says will be at the upcoming rally.

The Facebook event announcement for the Austin event, however, says nothing about Santa Fe students attending. A thorough search of coverage of that rally offers no indications that any students spoke or were even present. When Salon reached out to Grisham to follow up, asking where he had publicly announced that kids from Santa Fe were coming to the Austin rally, he did not reply.

Both the American Federation of Teachers and the National Education Association oppose arming teachers, with school board permission or not, stating, "We must do everything we can to reduce the possibility of any gunfire in schools, and concentrate on ways to keep all guns off school property and ensure the safety of children and school employees."

In 2016, when a sniper started shooting police during a Black Lives Matter protest in Dallas, the situation was made more chaotic by Texas's loose open carry laws. A number of open carry activists had attended the protest, because they have a pattern of showing up at leftist rallies with guns and looking threatening for unclear purposes. Their presence created confusion for cops trying to figure out where, exactly, the shots were coming from.

"Someone is shooting at you from a perched position, and people are running with AR-15s and camo gear and gas masks and bulletproof vests," Dallas police chief David Brown said after the event. "They are suspects until we eliminate that."

Burkhardt, however, insisted that arming teachers was the only solution to the problem of school shootings. “You’re never going to be able to stop a shooter from getting onto a school campus, no matter what you do," he said.

International statistics, however, challenge this view. In May, CNN reported that there had been 288 recorded school shootings in the U.S. since 2009. In comparison, the other six major developed nations, which all have far stricter gun regulations — Britain, Canada, Japan, Germany, Italy and France — had a total of five school shootings in that time.

Allowing teachers to come to school packing heat, with little training and without the permission of their employers, might seem radical to most Americans. Burkhardt was eager to reassure people that his group is reasonable and accommodating.

"We’re not trying to arm all teachers," he said. "If any teacher is uncomfortable carrying a firearm on school campus, you know, they don’t have to.”

Sean Penn on the Parkland students

Oscar-winning actor and activist stopped by Salon Talks to discuss his new novel, and guns in America.