Bourdain and Spade are not alone: Suicide rate is up by 25 percent, and LGBTQ youth are at high risk

Twenty-five states saw a rise in suicides by more than 30 percent since 1999, federal health officials report 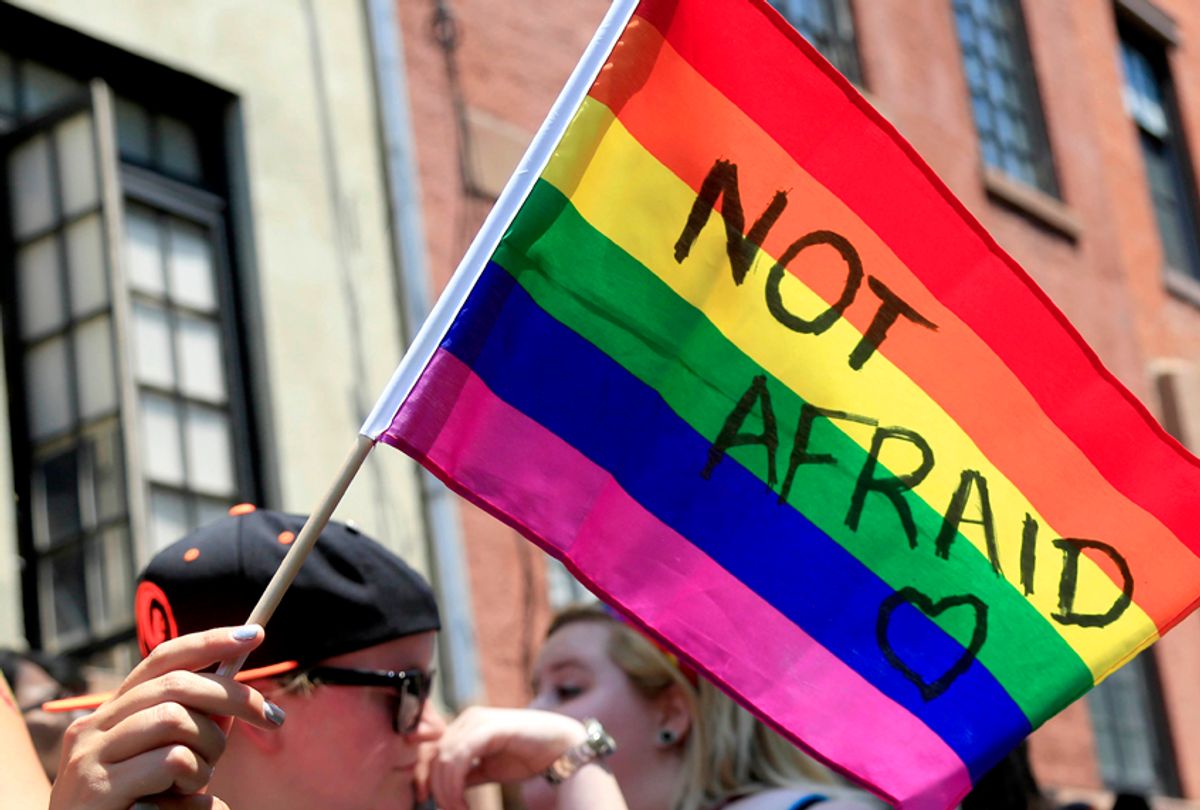 He was such a gifted violinist. A few weeks into his first semester at Rutgers University, Tyler Clementi was one of only two incoming freshman who had earned a seat at the institution's graduate-level orchestra.

The summer after high school graduation, Tyler began the vulnerable journey of coming out as a gay man to close family and friends. His family was supportive, and like most 18-year-olds, he was excited to head off to college.

It seemed that everything was going well for Tyler.

When September came, Tyler took his own life after he was spied on while having a sexual encounter with another man. The Rutgers University freshman has since become a symbol in the fight against bullying and homophobia, which can place LGBTQ youth at increased risk for self-harm, substance abuse and suicide.

Tyler did not have a known mental illness. His mother, Jane Clementi, told Salon she believes cyber-bullying was the cause of Tyler's death by suicide.

The Clementi family went on to launch the Tyler Clementi Foundation, an anti-bullying organization, after Tyler died in 2010 when he jumped off of the George Washington Bridge.

"By working on putting an end to bullying, we want to prevent mental health issues or crises before they happen. We want to work on preventing bullying even before it happens, instead of fixing it after the fact," Clementi said. "We want to create a culture of kindness and respect."

Clementi notes that "usually people are bullied for their differences," adding that the foundation stives to inspire people to "embrace and celebrate differences, rather than use them to tear someone down."

She also cautions that mental health cannot be ignored, and it is time to take the issue seriously.

"We must also make sure that everyone knows how to access treatment," Clementi said.

"I always say that Tyler made a really poor decision on the worst day of his life, and it was the permanent solution to a temporary problem," she continued. "I think if Tyler could have gotten through that night, or that day, and found a safe harbor and gotten out of the situation he was in – I think he would be here with us."

Recently, new research from the U.S. Centers for Disease Control and Prevention found that there are more to trends than simply mental health issues. The findings revealed that suicide rates are up by 25 percent across the nation over nearly two decades ending in 2016. Twenty-five states saw a rise in suicides by more than 30 percent since 1999, federal health officials reported.

More than half of the people who died by suicide had not been diagnosed with a mental health condition, though depression had been considered to be a major contributor of suicide, the study says.

Firearms were the most common method used overall. They were used in nearly half of all suicides and in 55 percent of the instances where there was no known mental health condition.

While some cases of mental illness may have been known, the government report also indicated that relationship troubles, substance abuse and financial issues are among some of the circumstances contributing to the trends. Suicide is rarely caused by any single factor, the researchers said.

"Suicide rates in the United States have risen nearly 30 percent since 1999, and mental health conditions are one of several factors contributing to suicide," the CDC researchers wrote in the report. "From 1999 to 2015, suicide rates increased among both sexes, all racial/ethnic groups, and all urbanization levels."

The recent deaths by suicide of acclaimed chef and TV host Anthony Bourdain, 61, fashion designer Kate Spade, 55, and music legend Avicii, 28, have garnered significant media attention and raise the question of whether certain groups, such as middle-aged men and women, may be more vulnerable to planning or attempting suicide. The CDC findings suggest that they are, in fact, disproportionately impacted.

"Middle-aged adults had the largest number of suicides and a particularly high increase in suicide rates. These findings are disturbing," CDC Principal Deputy Director Dr. Anne Schuchat told reporters on a conference call.

"What we tried to do in this study was look at the state level at trends over time," Schuchat said. "Unfortunately, the suicide rates went up more than 30 percent in half of the states."

"Those are generally rural states," Schuchat noted. "We know the economic downturn hit rural states hard, and the recovery sometimes takes longer in some of those rural communities. We also know in rural states that access to care may be harder."

"I have been learning that, as a nation, we have seen increases and decreases over time in suicide,” she continued. "Increases mostly seem to correlate with economic downturns."

The researchers found almost no group is exempt from America’s increasing suicide rate, except people older than 75.

LGBTQ teens are one group that is most at risk of attempting or making plans to commit suicide, according to a research letter published late last year in the medical journal JAMA.

Jason Cianciotto, executive director of the Tyler Clementi Foundation, agrees that one motivating factor behind these statistics is that – despite progress toward LGBTQ equality, including the legalization of same-sex marriage, inclusive anti-bullying policies and non-discrimination protections – not all teens grow up in supportive environments like Tyler did. Many evangelical Christians, for example, continue to preach that LGBTQ kids are going to hell, he said in an interview with Salon.

When he was co-authoring the book "LGBT Youth in America's Schools," Cianciotto unearthed similar alarming suicide data that can be traced back as far as the 1990s, he said.

"Given that we've known it for so long, we need to be asking the question why not enough has been done to change the context within which that happens," Cianciotto said

"Why — in a marriage equality world — when there are so many positive examples and role models, even just on sitcoms and television, openly gay characters and openly LGB, and now a growing extent more T actors, are we still facing this issue at the same amount?" he asked.

The executive director pointed out that increasingly harmful environments for LBGTQ people may exist in U.S. cities where "society hasn’t caught up to the legal defense of LGBTQ communities" and be "an example of this tension that has come to fruition again after the last presidential election."

Cianciotto also pointed to the drawbacks of the Trump administration's decision to remove questions about sexual orientation in national surveys.

"What data we did have to learn about some of the things that we're discussing now isn't going to be there, at least until there’s a new executive administration," he said. "That’s really frightening, particularly given the higher incidents of hate crimes, harassment and bullying that we’re seeing."

Cianciotto believes that, in order to adequately address the risks that LGBTQ youth face, "we have to take a look at the situations that youth are in at home, at school, at church, on the playground and understand how it is that we can make those spaces safe, particularly for LGBTQ youth."

Under Trump's presidency, Cianciotto said "we've definitely seen steps backward in terms of both law and policy as well as leadership."

"I think what's happened is the lack of moral values in our leadership has given permission for people who already feel that way to speak openly about it, whether they're anti-gay or whether they're racist and marching in the streets with torches just like the Nazis did," he added.

Dr. Aron Janssen, a clinical associate professor in the Department of Child and Adolescent Psychiatry and director of the Gender & Sexuality Service at the Child Study Center at NYU Langone Health, told Salon that LGBTQ youth are four times more likely than a heterosexual, cisgender child to attempt or make plans for suicide. And that rate is even higher among the transgender population.

The doctor said that moving past the stigma surrounding mental illness is one the biggest challenges when it comes to getting help.

"A lot of mental illness is treatable, but people have to be able to access care and in order to access care you need to kind of get past the stigma," Janssen said. "Historically, we have always carved out mental health as this extra piece."

Janssen also said there is a "tremendous physician shortage," and that there is "nowhere in the country where there are enough child psychiatrists to meet the needs."

"The coverage for mental health issues is still really patchwork and really difficult to navigate. And, unfortunately, the coverage is not adequate for what folks need," he concluded.

Things are not hopeless, though.

"Emphasizing visibility and transparency about mental health issues is incredibly important," he said. "Mental health issues are exactly the same as physical illnesses, and it really requires people to just break down their own sense of stigma about the difference to be able to say, 'How are you doing?', 'How can I help?', 'What can I do to be supportive to you?'"

Acknowledging that mental health issues are pervasive and that many people suffer from them -- often in silence -- is another important facet to the problem, Janssen said.

But, Janssen says, the situation can be improved in several ways.

"Improving access to care and improving training for mental health conditions, improving insurance authorization reimbursement rates for care is something that's super important," he said. "It's not the most sexy of interventions, but it's certainly a really, really important one. And it's hard to get a lot of momentum behind it."

"We need more effective treatments," he continued. "We have to do better job of studying what works and what doesn't and how often kids are actually being connected to the treatments that work."

Children from well-sourced families who believe in treating mental health can find a provider who can access evidence-based care quickly and effectively, but this is far from the reality of the average American kid in 2018.

Janssen noted that it can take the average child "over a year between when they start to experience symptoms of depression before they are accessing any care — and many kids never access any evidence-based care whatsoever."

Receiving treatments largely depends on where a child lives, what the child has access to and whether or not the patient knows what questions to ask of treatment providers with whom they are working when they finally seek care.

The CDC also provided advice for how to help prevent future suicides. The researchers said states can ease unemployment and housing concerns by providing temporary assistance, while health care providers can offer treatment options by phone or online -- especially for rural communities where services are not widely available.

The researchers also said communities can "offer programs and events to increase a sense of belonging among residents," while schools can design programs to help students manage challenges such as academic hardship and relationships.

That is in addition to the countless organizations like the National Suicide Hotline and the Trevor Project, which offer free, 24-hour, toll-free confidential support for LGBTQ youth who may be considering suicide.

"We are in a different era right now, with social media increased and also social isolation is high," Schuchat said. "We think helping overcome the isolation can improve the connectedness."