Jimmy Fallon finally stands up to Donald Trump: "I'll be making a donation to RAICES in his name" 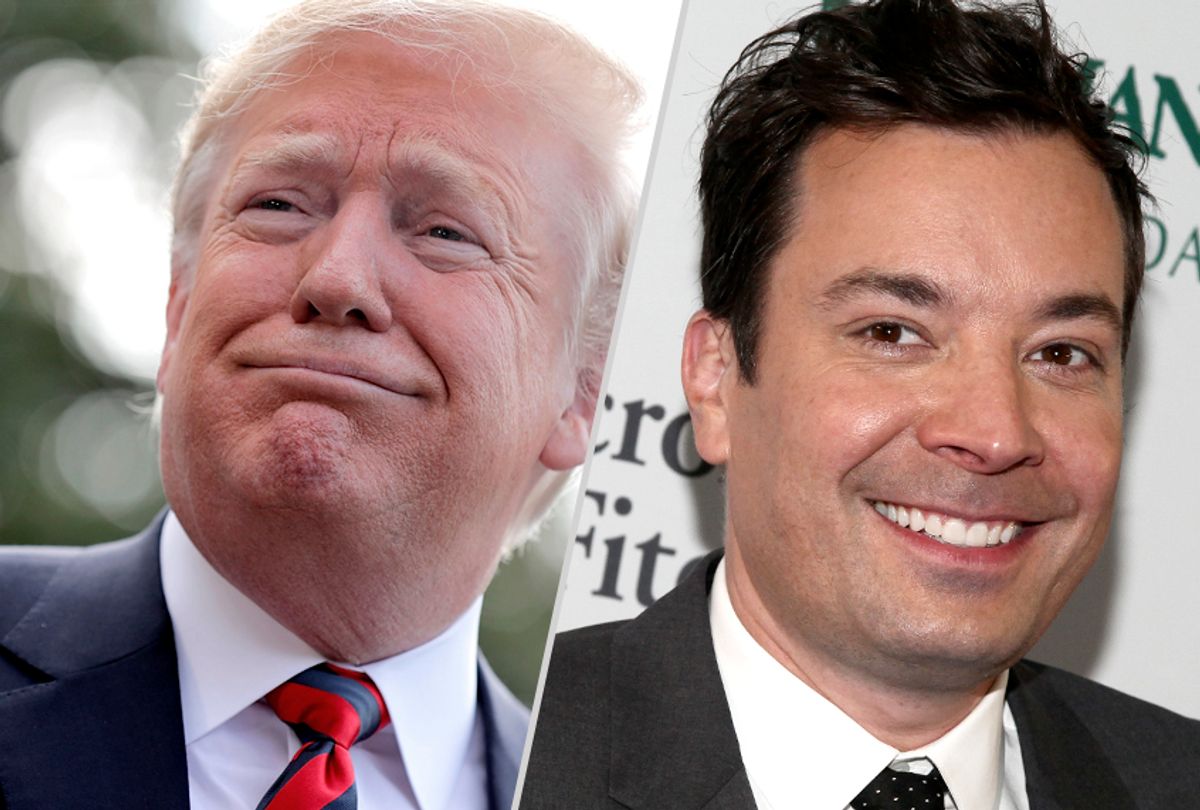 The Jimmy Fallon vs. President Donald Trump saga finally took an interesting turn this weekend when Trump responded to Fallon's self-pity over the backlash he's received from the infamous hair-ruffling of the then Republican nominee.

Trump was a guest on "The Tonight Show" in 2016, and the soft-ball interview by Fallon and the hair tousling was widely condemned as a normalization of a dangerous aspiring politician who would go on to win the presidency two months later.

The president took to Twitter to rail into Fallon who has since walked back on his actions during that interview. He wrote:

.@jimmyfallon is now whimpering to all that he did the famous 'hair show' with me (where he seriously messed up my hair), & that he would have now done it differently because it is said to have 'humanized' me-he is taking heat. He called & said 'monster ratings.' Be a man Jimmy!

"I did not do it to 'normalize' him or to say I believe in his political beliefs or any of that stuff," Jimmy Fallon told The Hollywood Reporter during an episode of the publication's "Awards Chatter" podcast last week.

Fallon, who had interviewed Trump seven times before, seemed to approach Trump, the Republican nominee, with the same jovial nature as he would an interview with Justin Timberlake. In Sept. 2016, a Trump victory was still seen as a long shot, but the nominee had long made clear his hateful, discriminatory rhetoric that he promised would become policy should he win.

The interview itself was unremarkable. Fallon, in his usual apolitical form, stayed on the surface, asking Trump about how his business background translated into politics and whether he payed attention to the polls. At one point, Fallon told Trump that he says "some shocking things," and that was the extent of Fallon holding the soon-to-be president accountable.

But then he asked Trump and was granted permission to "mess up" his hair. Trump beamed as Fallon playfully tousled his blonde locks, and if you didn't follow politics, you could almost forget that this presidential candidate had called Mexicans rapists, wanted to ban Muslims from the country and had allegedly harassed and assaulted multiple women.

Fallon told The Hollywood Reporter that it was the biggest mistake of his career. And the fallout came immediately. "It just got bigger and out of control," Fallon recalled. He told THR that he was particularly offended by the blows from fellow comedians.

"'You know the grind and you know me," he said, addressing them. "Of all the people in the world, I'm one of the good people — I mean, really. You don't even know what you're talking about if you say that I'm evil or whatever.'" Fallon continued, "But people just jump on the train, and some people don't even want to hear anything else. They're like, 'No, you did that!' You go, 'Well, just calm down and just look at the whole thing and actually see my body of work.'"

Fallon's show suffered from the episode, too. According to THR, "The Tonight Show" has lost more than one-fifth of its audience, while his more political late-night counterparts continue to outpace him in viewership and Emmy nominations.

"It was definitely a down time," Fallon said after the hair ruffling. "And it's tough for morale. There's 300 people that work here, and so when people are talking that bad about you and ganging up on you, in a really gang-mentality . . . "

He continued through tears, "You go, 'Alright, we get it. I heard you. You made me feel bad. So now what? Are you happy? I'm depressed. Do you want to push me more? What do you want me to do? You want me to kill myself? What would make you happy? Get over it.'" Fallon added, "I'm sorry. I don't want to make anyone angry — I never do and I never will. It's all in the fun of the show. I made a mistake. I'm sorry if I made anyone mad. And, looking back, I would do it differently."

Now, after this interview, no one really felt bad for Fallon. As immigrant families are being torn apart, as unarmed black children are being shot and killed by the police, Fallon is far from a victim here.

But still, in line with the president's habit of punching someone while they're down — then adding a whopping gulp of misogyny whenever possible as a bonus — Trump wrote his "be a man, Jimmy!" tweet Sunday, days after the interview was published.

And in an apt response, Fallon tweeted that he will "be making a donation to RAICES" in Trump's name.

RAICES, the Refugee and Immigrant Center for Education and Legal Services, is a nonprofit in Texas that provides free or subsidized legal services for immigrants and their children. The organization started "Reunite an immigrant parent with their child" fund on Facebook, which went viral and has raised over $20 million, making it Facebook's largest fundraiser ever, according to Time.

Finally, Fallon moves away from the hollow apologies and self-wallowing and uses his platform and money for social change. Now that's an amend to get behind.

Canadian actors on writing comedy in the Trump era

Four Canadian actors/comedians give advice and hope on how to keep making people laugh during Trump's America.