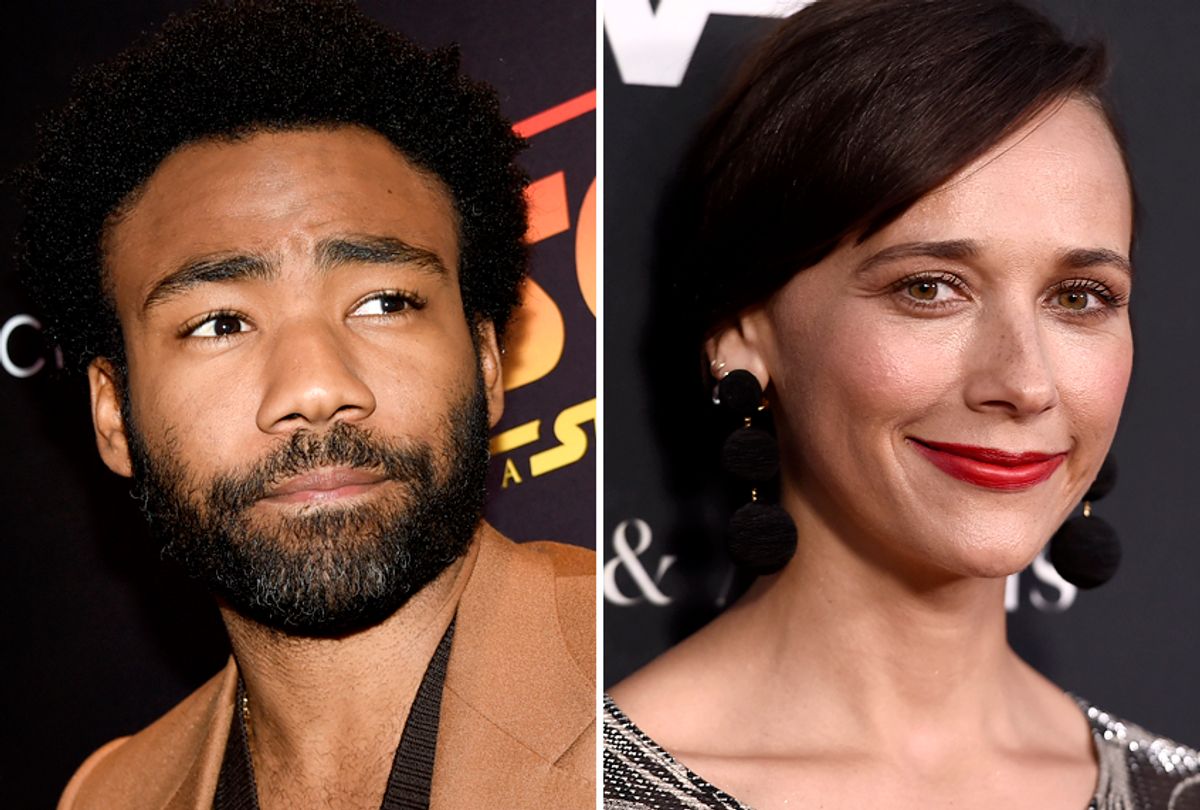 Time's Up, the anti-sexual harassment organization made up of women in Hollywood, has released a new video in the form of a public service announcement, directed by actress Rashida Jones and narrated by creator Donald Glover.

The PSA is the most artistic-driven venture from the organization that formed in the wake of exposés about disgraced Hollywood mogul Harvey Weinstein. Time's Up started a legal defense fund in partnership with the National Women's Law Center to help victims fight sexual harassment at work. The organization has also called for thorough investigations into accused entertainers like R. Kelly.

New: Time’s Up and Rashida Jones have released a PSA about sexual harassment. Check out the video narrated by Donald Glover 🗣https://t.co/jfCiHGuHPm pic.twitter.com/dwKEBkmR1J

Jones told Buzzfeed, who exclusively published the video, that when it comes to harassment and assault, the public has seen "extreme versions come to light" in the months since Weinstein's ouster. But what people "suffer day to day with these nuances and micro-aggressions, which we may not have the language to defend ourselves against" has not yet had its moment in the spotlight.

Time's Up sought to fill that void by creating something that was "not ultra didactic, not going to be necessarily just for women, something that could travel on the internet, something that's filled with facts and hopefully a little bit entertaining that could help educate people a tiny bit," Jones explained. And the point is to move the needle forward.

"I think everybody's at a bit of a loss now," she added. "This was a really important, explosive time, where so much happened. There was this giant sea change, which is great. It had to happen. But now we have to get to the nitty-gritty of what we want our world to look like in 20 years."

The result of her direction is a predominantly black and white-animated PSA that takes viewers through some of the most common questions and scenarios pertaining to sexual misconduct in the workplace.

Glover's mellow voice, which became a household staple on "Atlanta," is used to disarm the viewer.

"Has the current wave of sexual allegations left you scared? Confused? Maybe even a little angry?" he asks. "Is the culture shifting under your feet so fast, you can't make sense of it?"

During that question, an animation of a mock calendar moves from the "dawn of humanity" through the 1880s to the 1960s to one year ago – all saying "harassment OK!"– and only changing "today." It is a powerful illustration about how truly nascent this movement is — and how long women, in large part, have endured harassment on a daily basis.

The video, which answers "frequently asked questions about sexual harassment," includes vocal and visual illustrations of important issues like unwelcomed touching, commenting on a co-worker's appearance and whether it is OK to ask someone out at work.

The first two are, of course, hard nos. As far as dating, Glover explains, you must examine the power dynamic first: "Are you their boss?"; "Do you have a more secure job?"; "Is there a possibility that this person might fear getting fired if they say no or report you?"; "Is it possible the vibe you think you're picking up on is just them trying to being nice?"

If you've answered "yes" to any of these questions, Glover cautions: "Just don't do it."

The final question is about witnessing the inappropriate behavior of other people — a charge to everyone to speak up and promote safe and respectful work environments for all.

"There's been a lot of discussion about whether that's even fair to link someone pinching an ass or something off-color at work to an actual assault," Jones told Buzzfeed. "I think a lot of people struggle with the connection, because they think it's dramatic to connect the two. So the PSA is intended to explain that there are these nuanced dynamics that are happening when there's a power imbalance."

The whole video also reminds viewers that, while it is a resource, most of its content is common sense. The best moment moment comes when Glover says, "If you're still confused, please check out our website: www.don'tpullyourd*ckoutatwork.obviously."

Jones told Buzzfeed that the Time's Up PSA used Blue Seat Studios' "Tea Consent" video as a model. Its clear and simple approach to explaining sexual consent — as if someone was offering a cup of tea — prompted the video to go viral in 2015. Blue Seat wrote the script for Time's Up's PSA and animated it, too.

Jones added that the video also intended to bring men into the conversation — and that is why Glover was tapped to narrate.

"I really respect his ability to be a part of and criticize culture at the same time. I think it's a really hard balance to strike," she continued. "He's got that balance that very few artists do, where he's able to be true to himself and be honest and make it feel fresh. But also to say something and have people listen."

Jones and Glover spent a few sessions recording the narration.

"He brings this kind of cool, laid-back energy to it, which I think is good," she said. "Because, I think all of us have kind of preach fatigue. There's a lot of shit going on in the world, and there are a lot of things that need to be fixed and dealt with — and it's increasingly harder to hear all that at the same time."

In the end, Jones hopes her PSA feels inclusive of other industries and experiences.

"We didn't want to be a group of Hollywood bubble people who don't understand the larger issues," she said. "For me, it's always been until the most marginalized person is taken care of and feels safe and has protections, then nobody's done a good job. Intersectionality, including other industries — all these things are incredibly important to us, so all the language — hopefully — will feel inclusive of people who have in the past felt left out of these conversations."

Can #MeToo kill the casting couch?