When can a business deny service? Kicking out Sarah Huckabee Sanders is not discrimination 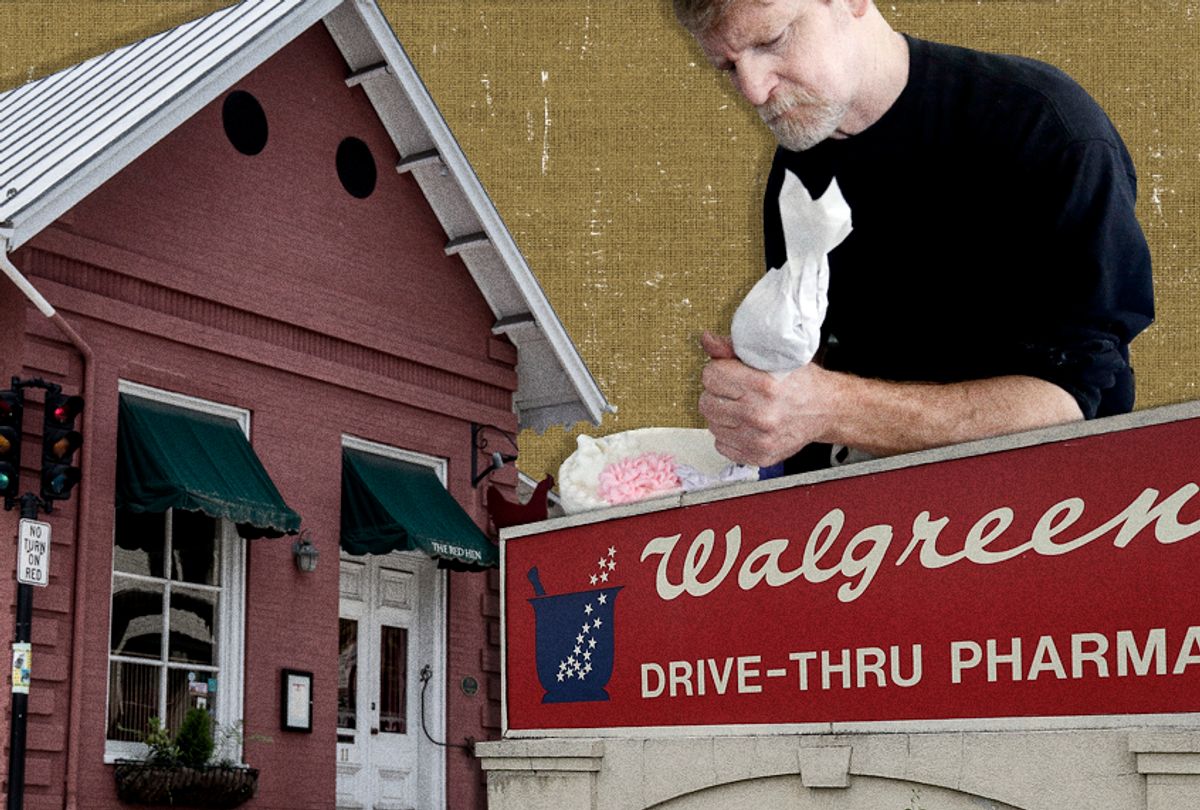 When does a business have a right to deny service? It's question that's been roiling the country all month, starting with a Supreme Court decision in early June in which the court dodged the issue of whether or not a Colorado baker could refuse to serve a same-sex couple who wanted to buy a wedding cake.

The issue dominated headlines again over the weekend because of two very different cases. In one, a pharmacist at a Walgreens store in Arizona denied a woman medication necessary to complete a miscarriage, expressing moral disapproval of her medical decision. In another, White House Press Secretary Sarah Huckabee Sanders was asked to leave a restaurant called the Red Hen in Lexington, Virginia, because the staff was uncomfortable serving someone who defends the administration's attacks on human rights.

These disparate incidents caused a lot of accusations of hypocrisy from both liberals and conservatives. Liberals accused conservatives of hypocrisy for defending businesses that refuse service to people for being gay or for needing reproductive health care. Conservatives, along with some liberals eager to show off their commitment to "civility," accused progressives who supported the Red Hen of being two-faced: How can you condemn discrimination against women and minorities but applaud it when the target is a Trump official.

Clearly, there's a lot of confusion and rancor here, and the issue is both legal and ethical. Is it always wrong for public-facing businesses to turn customers away, or is it only wrong in some circumstances? What are the legal questions at stake in these cases?

There is "a pretty robust debate about who has access to the public marketplace and what rights business owners have," Laura Durso, vice president of the the LGBT research and communications project at the Center for American Progress, told Salon. "I think it’s a real area of confusion for the country, but something we have been grappling with for decades.”

“Obviously, these are all businesses open to the public, serving the public, and in each case somebody got turned away," said Louise Melling, director of the Center for Liberty at the ACLU. But Sanders' case was different, Melling said, in that "she wasn’t turned away for being a member of a marginalized community."

At the center of this debate are what are known as public accommodation laws. These laws, which can vary widely from state to state, are meant to balance the right of a business owner to control their own affairs with the government's interest in promoting equality and fairness. These laws rarely, if ever, broadly assert that businesses have to serve all comers, no matter what. Instead, such laws created "protected classes," which could be described as categories of reasons that businesses cannot cite to turn people away.

“Traditional public accommodation laws, the actual statutes that regulate who you serve, have barred discrimination based on race, sex and religion, for example, and have done that to remedy traditional exclusions," Melling explained.

The case of Masterpiece Cakeshop v. Colorado, recently before the Supreme Court, is a straightforward public accommodations case. Colorado has a state law barring discrimination based on sexual orientation. Neither the couple that was denied a cake nor the baker really disputes that the baker violated the relevant state law when he refused them service. The baker simply argued that, as a person whose hostility towards same-sex marriage is rooted in religious belief, he should be exempted from the general enforcement of the law. This remains an open question, as the court refused to rule on the merits of the case, instead staking out a narrow ruling that avoided the larger questions.

With the case of Sanders, however, there is no legal question at stake. Political affiliation or ideology is not a protected class in Virginia, so the owners of the Red Hen were clearly within their rights to eject her on those grounds.

With the Walgreens case, things get a bit murkier, as Arizona has a state law allowing pharmacists to cite moral objections to filling out prescriptions. It's possible, however, to construct a legal argument that such legislation violates both federal and state laws barring gender discrimination.

“The challenge here is: Is it discrimination against women?" Durso asked. She noted that such pharmacy refusal policies disproportionately impact women, and that refusals have "a real and significant impact on the people who are turned away."

Even though some states have robust public accommodation laws, others do not. Colorado explicitly bars discrimination on the basis of sexual orientation, for example, but 29 states in the country do not. What constitutes gender discrimination, for that matter, is still being fought over viciously in courtrooms and state legislatures across the country.

No jurisdictions anywhere have laws to protect people who make a living by apologizing for the authoritarian tendencies of former reality TV stars who now hold high office.

But these complexities have barely been mentioned in most coverage of this debate because what's really driving the discourse are not legal questions -- which are relatively clear-cut -- but larger moral and ethical considerations about what does and does not constitute discrimination.

The reality is that most Americans do not believe that businesses should have to serve all comers, under all circumstances. It's widely accepted that a restaurant like the Red Hen should, for instance, be able to eject someone for acting drunk and disorderly. Or that restaurants are allowed to enforce a dress code, barring people who show up barefoot or in shorts. Or that nightclubs can have a VIP section for the owner's friends or fashionable people she wishes to impress.

The ethical question, as reflected in public accommodations law, is really over whether classes of people are being discriminated against based on their identity. Even when the law hasn't caught up, there seems to be a widespread sense among the public that it's unfair to discriminate on race, gender, sexual orientation, religion, disability status and other identity markers — including political affiliation, which is a protected class in many jurisdictions, including the District of Columbia.

If one generally agrees that it's wrong to discriminate on these grounds, even if it's technically legal in many places, what are we to make of Sanders getting the boot at the Red Hen?

“In the case of Sarah Sanders, the restaurant turned her away because of her role, I think, in the administration" and the public stance she has taken, Melling said. "It wasn’t because she was a Republican," at least according to most media reports.

In her interview with The Washington Post, Stephanie Wilkinson, the owner of the Red Hen, said she had refused to serve Sanders because of her role in the administration, and noted that she had plenty of customers with whom she has political disagreements.

Durso said she felt that the entire argument equating Sanders' experience with that of a gay couple being refused a wedding cake or a woman being denied medication prescribed by a doctor "misunderstands the way that power works in our society."

What happened to Sanders did not represent a “systematic denial of service to Republicans," she said. But when it comes to black people, women, LGBT people and other marginalized groups, there's a history that gives context and weight to anti-discrimination laws.

“I have no doubt that this was incredibly upsetting, for Sarah Sanders to be asked to leave the restaurant," Melling said. But this particular event, whether or not one agrees with it, did not "contribute to inequality."

The broad social effects of discrimination are being glossed over in much of this discourse. It shouldn't be. For Trump officials who are called out in public, the result is momentary discomfort in a life otherwise defined by great privilege and power. But for people who experience systematic, identity-based discrimination, the consequences are far more grave.

"Research has shown that discrimination, prejudice, and stigma can lead to negative health outcomes, including higher rates of depression, anxiety, and substance abuse as well as an increased risk for physical health problems, such as cardiovascular disease," Durso and her colleague Caitlin Rooney argued in an article for the Center for American Progress last November.

There's deep irony in the fact that Sarah Huckabee Sanders is upset at being turned away after spending her time with the Trump administration justifying all manner of identity-based discrimination. She's argued that businesses have a right to post signs explicitly denying LGBT customers service. She has said it's "best for the military" to bar transgender troops, even though research commissioned by the military itself has said otherwise. She has defended employers singling out women who use birth control for denial of health care services through their insurance plans. She has rationalized Trump's efforts to ban Muslims from entering the United States. She has defended the targeting of legal asylum seekers for family separation, a policy clearly based in Trump's animosity toward Latino immigrants.

Sanders is different in many ways from the people she denigrates day after day. One important difference is that, unlike her targets, she can simply walk away. She is not required to be a spokesperson for authoritarianism. If she quit tomorrow, she could walk into a cushy job elsewhere.

Most of the targets of her abuse cannot do the same. If you come from Iran or Honduras, you can't simply just be from somewhere else. Gender identity and sexual orientation aren't like a pair of jeans you can change at a moment's notice. Women who need birth control can't just shrug off an unwanted pregnancy.

More to the point, none of these people should be asked to change. There is nothing wrong with being Muslim, Latino, female or LGBT. The same cannot be said of Sanders and her freely made choice to serve as a spokesperson for bigotry. That might be the most important difference of all.