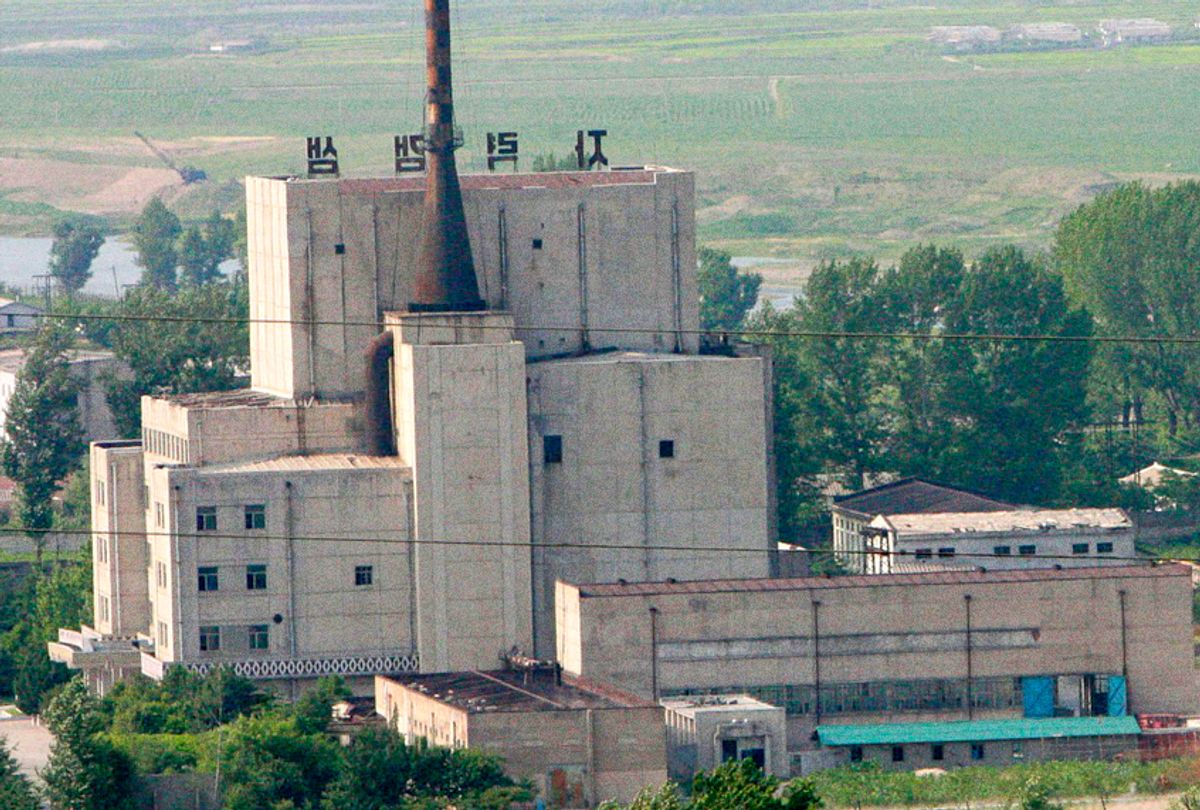 North Korea is expanding a major nuclear research facility, despite President Donald Trump's assertion that leader Kim Jong Un has pledged to disarm and close its nuclear sites, according to new satellite images and a research paper published by a North Korea monitoring group.

Experts at 38 North, a website affiliated with the Stimson Center in Washington D.C. devoted to analysis of North Korea, concluded the photos illustrate "improvements to the infrastructure at North Korea's Yongbyon Nuclear Scientific Research Center are continuing at a rapid pace."

The satellite photos are from June 21.

The news comes less than two weeks after Trump hailed the June 12 meeting in Singapore as a major diplomatic breakthrough with the North Korean leader over its nuclear weapons program after decades of hostility.

"Our precedented meeting – the first between an American president and a leader of North Korea — proves that real change is possible!" Trump tweeted following the encounter.

Trump and Kim signed a joint statement at the summit and vowed to build "lasting and robust peace" and to commit "the complete denuclearization of the Korean Peninsula."

"We're ready to write a new chapter between our nations," Trump said at a press briefing after the summit. He also said it was a "great honor" to meet the North Korean dictator and called their meeting "honest, direct and productive."

The improvements to the Yongbyon facility include modifications to
a plutonium production reactor's cooling system and various support facilities throughout other operational areas Yongbyon. Uranium enrichment, a central element for civil nuclear power generation and military nuclear weapons, is ongoing, per 38 North's analysis of the photos.

The White House has not publicly reacted to 38 North's analysis.

"The Yongbyon Nuclear Scientific Research Center is located about 60 miles north of the country's capital and is a core part of its nuclear weapons program," USA Today reports.

In its analysis, North 38 stated that the continued developments to the Yongbyon facility "should not be seen as having any relationship to North Korea's recent pledge to denuclearize."

"The North's nuclear cadre can be expected to proceed with business as usual until specific orders are issued from Pyongyang," the authors of the report said.

Ahead of the Singapore summit, North Korea appeared to destroy at least three nuclear tunnels, observation buildings, a metal foundry and living quarters at its Punggye-ri nuclear test site.

But the meeting has been criticized for being heavy on promises and light on details of any policy reforms and producing only a pledge to denuclearize without a definition of what that would entail. Salon's Heather Digby Parton called it a "nothing summit" and suggested Trump "went to Singapore for a giant photo op."

The joint agreement didn't provide specifics about how North Korea would denuclearize and by when.

Secretary of State Mike Pompeo has said the Trump administration will regularly assess Pyongyang's seriousness about abandoning its nuclear weapons program, but said he would not put a timeline on it. He is expected to travel to North Korea next week.

"North Korea is not obligated to any specific actions as of yet, but (these images) certainly underscore the importance of continuing negotiations, and getting a detailed agreement in place to freeze North Korea’s nuclear program," Jenny Town, managing editor at 38 North, told USA Today in emailed comments. "This is the true test of the Trump administration, to now see if they have the will and ability to do the hard work needed to move past lofty goals to practical and sustainable solutions."