Why Silicon Valley wants to privatize your genealogy

Our family histories are becoming the provenance of Silicon Valley’s data miners. Is this a good idea? 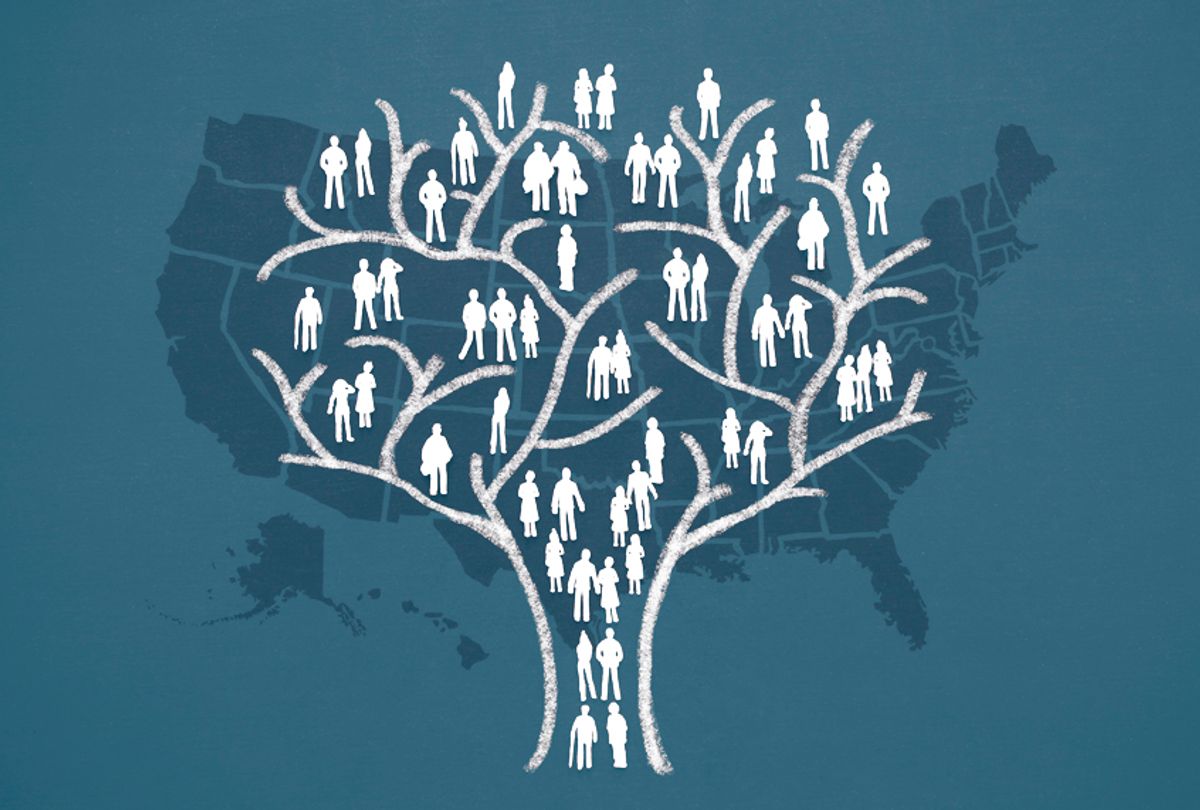 We all belong. Whether we know it or not.

Yet the technocrats of the capitalist world tell us we are interchangeable, identical consumers. This is a lie. We are all contingent; we are all someone's child. We are born in a specific place at a specific time. Even before we are named, we are rooted. Each and every one of us is bound up in a history. We are the result of tribes, clans, villages; every one of us is the cumulative result of thousands upon thousands of years of migrations, wars, alliances, marriages.

We are rooted creatures. In the old days, we knew this: we kept our ancestries in Bibles, in Torahs, and in oral tradition. To know our past meant to know ourselves.

Nowadays, modernity asks us to believe a different story. Under the regime of late capitalism, identity is determined not by your community, but by your choice of brands. A community, a political cause, a church, a nation, a tribe, a family: these are all threats to the supremacy of capital. They are its rivals.

Well, then. If the market cannot erase family history, then it can do the next best thing: own it.

Therefore, it should surprise nobody that sites like Ancestry.com have taken over genealogy. But before we accept the new state of affairs, we should ask why it has to be this way.

As I’ve written before, Silicon Valley doesn't actually invent things. The Valley takes what already works, what has already been built, and claims it for itself. Apple took military research and made an iPhone. Uber parasitizes private cars. Ancestry.com follows the same model, but for genealogy.

That scheme has been profitable. Ancestry.com is the largest for-profit genealogy corporation in the entire world. The company raked in over half a billion dollars of revenue in 2015, and is traded on NASDAQ. By 2006, the company contained records on 500 million people. Under its associated service, Find a Grave, you can discover the burial spot of your ancestors.

There's no doubt the service is useful. I may or may not have spent several hundred hours trying to discover if I was related in any way to the Dread Pirate Roberts.

I'm joking. Not about profitability, though. Ancestry.com is not sinister, at least not in the same way that Amazon or Apple or Elon Musk are. But the question posed by the site is far more fundamental.

The trio of technology, modernity and capitalism were the primal forces that destroyed human rootedness and shifted us from tight-knit communal societies to atomized, isolated consumerist states of being. Ironically, these same engines now plan to sell our roots back to us. They want us to buy a sense of belonging. Essentially, they're playing the role of pawnbroker: "We dismantled the old world. We used it for our own ends. Now you should ante up if you want it back."

Should we pay them this ransom?

We've got a history together

In a recent article for this magazine, Nicole Karlis wrote eloquently about the American thirst for community: "Sifting through the commercials and ads caricaturing soccer culture, one advertisement from the personal genomics testing site 23andMe caught my eye: 'Root for your roots, celebrate summer's biggest sporting event by exploring your connections to the world.'”

Karlis' research suggests that the at-home genetic testing industry (AncestryDNA, MyHeritage, 23andMe) is the natural result of a nation whose populace lives in suburbs, away from its roots.

Genetic testing brings connection. Only in an age of mass forgetfulness could such testing even be necessary. The left and right don’t agree on a lot, but they agree on one thing: This is not the way to live. Human beings are not atomized consumers. We are social animals. We need community to be happy.

Capital knows this. Capital has always peddled a sense of belonging: meet the Pepsi Generation. But the technologists have kicked it up a notch. After all, you may be living in a working-class serf farm on the edge of an Amazon warehouse compound ... but by God, you will know exactly which province of France your great-great-grandparents belonged to.

Ancestry.com would probably claim that it was simply uploading records that had been locked away in distant courthouses and millions of dark corners. The company would argue that it was making a famously difficult task much easier. Tracing lineage is drudgery. Here comes a site that has the whole mess wired up in hyperlink format. What's not to love about that?

The information is not held hostage. And I can imagine a world where Ancestry.com's task is unremarkable.

But this is 2018. Google and Facebook hoard our data. We, the living, are already treated as if we are bundles of exploitable information ... and now, thanks to Ancestry.com, the dead can join in the fun.

Coughing up a list of examples is easy: Source code. The financial documents of the one percent. The Panama Papers. Government secrets. The clandestine details of how the NSA works.

Those are our culture's equivalent of holy texts. They are sacred documents that the rabble are not allowed to read. Indeed, the Powers That Be even get nervous if we share their intellectual property.

But they're just dandy with hoarding details on every generation of my family. Source code is privileged. The name of your great-great-grandmother, or your DNA, is not.

Family and community are contingent factors. If anything is sacred, they are. To us, they provide most of life’s fulfillment. Ancestry.com sees them as troves of data, nothing more: exploitable and fungible. We can guess what comes next: "Did your third grandfather fight at Shiloh? Then you'll love our Civil War Franklin Mint set of collectibles."

Ancestry.com and other genetic and genealogical sites have found a way to sell your own identity back to you. Ancestry.com offers you the decontextualized parts of your family history: names, dates, locations. But as your grandparents could tell you, real family histories contain gossip, embedded narratives, and overarching themes. You know how it goes: such-and-such was a hellraiser, such-and-such had a baby out of wedlock, such-and-such rode a donkey to this village. By contrast, Ancestry.com has all the narrative heft of a Home Depot receipt. The site can't even provide the service it pretends to offer.

Technology can make belonging easier, but only human beings can give the connection that makes life worthwhile. 23andMe only offers percentages. Ancestry.com only gives you numbers and nouns. No wonder the traditionalists have lost their damn minds: Shorn of our stories, we're numbers in a manifest. This is the new New World. However our ancestors arrived here, by the Bering Strait or in ships, we're all in steerage now.