The human costs of the Olympics: Inside the community displaced by the 2016 Rio games

Salon talks to the director of the documentary "Olympic Favela," now streaming on Salon Premium 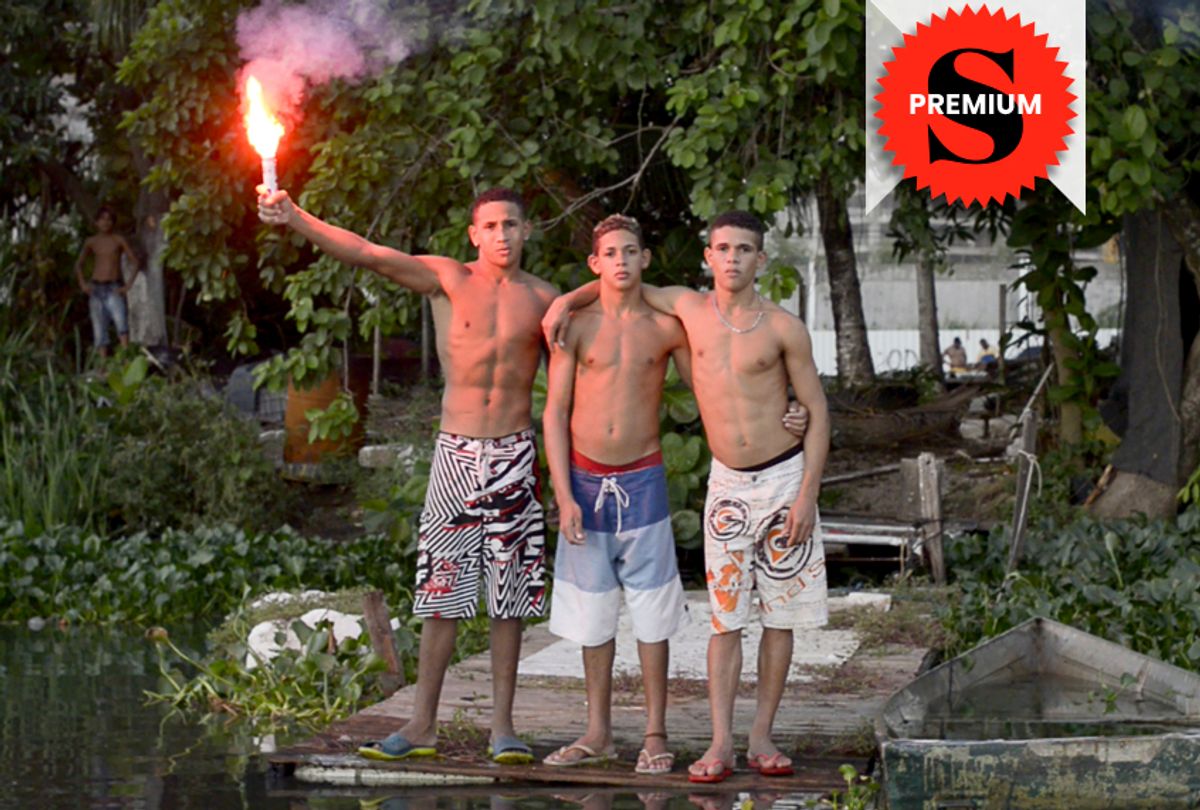 With so many of us glued to our televisions watching the World Cup, it’s a good moment to consider how massive, global sporting events impact local communities. To that end, take a look at “Olympic Favela,” a documentary about the disenfranchised people who were relocated to make way for the construction of the 2016 Olympics facilities in Brazil.

You can watch the full documentary "Olympic Favela" on Salon Premium, our new ad-free, content-rich app. Here's how.

Director Marc Ohrem-Leclef spoke to Salon about his fly-on-the-wall approach to the dispossessed people of “Olympic Favela” — and also provides a heartbreaking update on his subjects.

How did you come to focus on the main subjects of your film?

I began the Olympic Favela project  (2012-2016) after reading about plans to evict entire communities in Rio de Janeiro as the city was preparing to host the World Cup (2014) and 2016 Olympic Games. The fact that the Olympic Games, an event marketed as uniting people from all over the world, would again displace many thousands, made me interested in how the residents fighting forced evictions from their homes were coping with the situation. To put human face to their plight and explore why they were fighting to stay in their neighborhoods which are generally portrayed as crime-ridden, dangerous and improvised, I developed a concept to portray them through two photographic series.

Many of the local residents faced losing their homes, built with their own hands and often in locations that would not allow other, major structures, an excuse for evictions often used by city planners.

I had help with initial introductions to community leaders from the NGO Catalytic Communitiesm yet the process of gaining access to these communities during a time of great distress was slow, and I had to gain my collaborators' trust in lengthy conversations.

Eventually I would begin making both natural and performative portraits of them posing with lit emergency flares in their neighborhoods, a concept I had developed at the studio based on image research with the idea of showing them in a moment of strength rather than defeat, not knowing if the residents would actually embrace it (they did so, whole-heartedly).

Over the course of four years I worked in 15 communities, returning to many of them frequently to make portraits and interviews. After publication of the book “Olympic Favela” in 2014 (coinciding with the World Cup), I knew my work was not finished and began filming the residents I had become closest with in locations most gravely affected by the policies of removals, focusing on showing how their lives were changing as the city's landscape was changing due to construction related to the Olympic Games. Among them was the fisherman Barao of Vila Autodromo on the shore of the beautiful Lagoon of Jacarepagua, whose portrait is on the cover of the book, who emerged as a main character along with the community's baker, Arimatea.

The footage made in the following year and a half became the last chapter of my project and turned into the short doc film "Olympic Favela."

You stick to a very observational style. Why did you approach the subject this way and did you interview the subjects on or off camera at all?

It was a very conscious decision to portray my collaborators, who in the news were generally portrayed in moments of violence and defeat, in a dignified way as people we all can relate to.  The same approach continued during the production of the film. I made many on-camera interviews with my collaborators and filmed directed scenes with them that had a performative character and were meant to relay their experience of engaging with changed environments as construction-projects enveloped their communities and they relocated to a new home. I also continued the conceptual approach of filming them representing their plight through footage featuring them with lit emergency torches.

Over time I felt that their reality carried more power than those directed scenes and continued shooting their everyday lives over the course of over a year — this reality also sparked a more impactful contrast to the clearly staged scenes filmed with residents holding the torches, breaking the quiet, nuanced observational mode more dramatically. During the editing phase I experimented with adding voice over, using portions of interviews to include multiple voices but ultimately decided that the short monologue of the fisherman Barao, along with the observational imagery, carried all the emotional weight necessary to move audiences and tell my collaborators' stories.

Can you provide an update on any of the people in the film, namely the fisherman and the three boys?

Barao, the fisherman whose portrait is on the cover of the Olympic Favela book, was known throughout his community Vila Autodromo. A charismatic character, he resisted multiple removal efforts by the local authorities for a long time, until he and his three sons Mateus, Lucas and Tiago were given three separate apartments in newly — and poorly — built housing projects. These fenced-in complexes to accommodate the many thousand residents of Rio de Janeiro who were removed form their homes in the wake of preparations for the Olympic Games were often located on the periphery of the city, ghettos far away from educational, health and shopping facilities.

Barao's emotional monologue in the film mentions a son he has lost to gun violence years ago. Terribly so, it also foreshadowed the death of Mateus who appears in my film; just weeks after I finished filming in Rio de Janeiro he died through gun violence in the housing complex he had been relocated to. The argument could be made that he'd still be alive had he not been removed to this newly built complex. I visited Barao months after this had happened, during the Rio Film Festival where “Olympic Favela” was screened, and found him heart-broken and also still awaiting the payment of compensation promised by the city for the land he lost on the shore of the lagoon, where he used to live.

Although a small part of Favela Autodromo's community (about 20 houses of a few hundred) were eventually saved near their original location, the community as such is gone, and the valuable land on the shores of the lagoon is sitting idle for redevelopment into upscale apartment complexes.

There's a ghostly, out-of-time feel to the film, considering a couple years have passed since the Olympics in Brazil. Can you discuss how you hope your film functions differently from, say, a CNN news report about relocation, for an audience?

It's an interesting aspect to consider 'timeliness' of the film — I began making in order to capture my experience of "time spent" while sharing in my collaborators' lives, and in many respects it is about a very specific time frame and locality. However, “Olympic Favela” is as much about my collaborators and their fellow citizens in Rio de Janeiro, as it is about the widespread and seemingly ever-repeating practice of using the Olympic Games as an excuse to remove poor communities from visible areas of host cities, whether you look at Rio, Sochi, Beijing or LA.

I've been told by audiences that my film moves them because of its quiet approach to a subject matter that has been presented in news items as a fast-paced story of violence and destruction, but generally lacking the human dimension of what the visually dramatic moments represent. Favela communities are still often disregarded because of their bad reputation, and this can make it hard for audiences to have empathy with people from these neighborhoods. That is why my approach to the work in Rio has always been to show them as the kind, proud, productive and, most importantly, relatable people I have encountered.

I began working on this project with a balanced view of all arguments for and against the removal of certain communities, but as time has passed virtually all negative predictions about land-grabbing by building conglomerates, corruption between various municipal institutions, and the collapse of relative peace of gang violence — attained through special policing projects for which funding had already run out before the start of the Olympic Games — immediately after the end of the games–have become reality.

I was able to visit a few festivals where “Olympic Favela” screened, including the Nantucket International Film Festival. It was a wonderful experience in that the scope of the festival allowed for intimate exchange with highly engaged audiences. My film was shown as part of the short film program and it was interesting to see how “Olympic Favela” took over a good part of the Q&A with audiences curious as to how I gained access to the communities and my personal experiences of making the film.

In early 2017, I began working on a new project that engages in questions about male intimacy and the intersections of friendship and love between men in India. Historically, fluidity of gender and sexuality were widely accepted in South Asian cultures, creating unspoken, liberal spaces. Today, these traditional spaces are shrinking and notions of identities that were previously irrelevant manifest themselves. Urban queer communities gain confidence, while society at-large continues to shame same sex-love, and Colonial-era law continues to criminalize it. Having traveled in eight states across India to date, I make portraits and interviews with collaborators from a broad range of identities and backgrounds and classes, from scholars and journalists to students and day laborers. Together, portraits and interviews reveal the intricate web of dynamics changing the ways men relate to one another here, and how queer identifying communities begin to make a place in Indian societies for themselves. The project is ongoing.

Follow the director on Instagram, and get swept into an alternately disturbing and beautiful world, where dignity and humanity clash with injustice in “Olympic Favela,”streaming on Salon Premium, our new ad-free, content-rich app.