Two Kepler-discovered exoplanets could have changing seasons and a climate like Earth, according to a new study 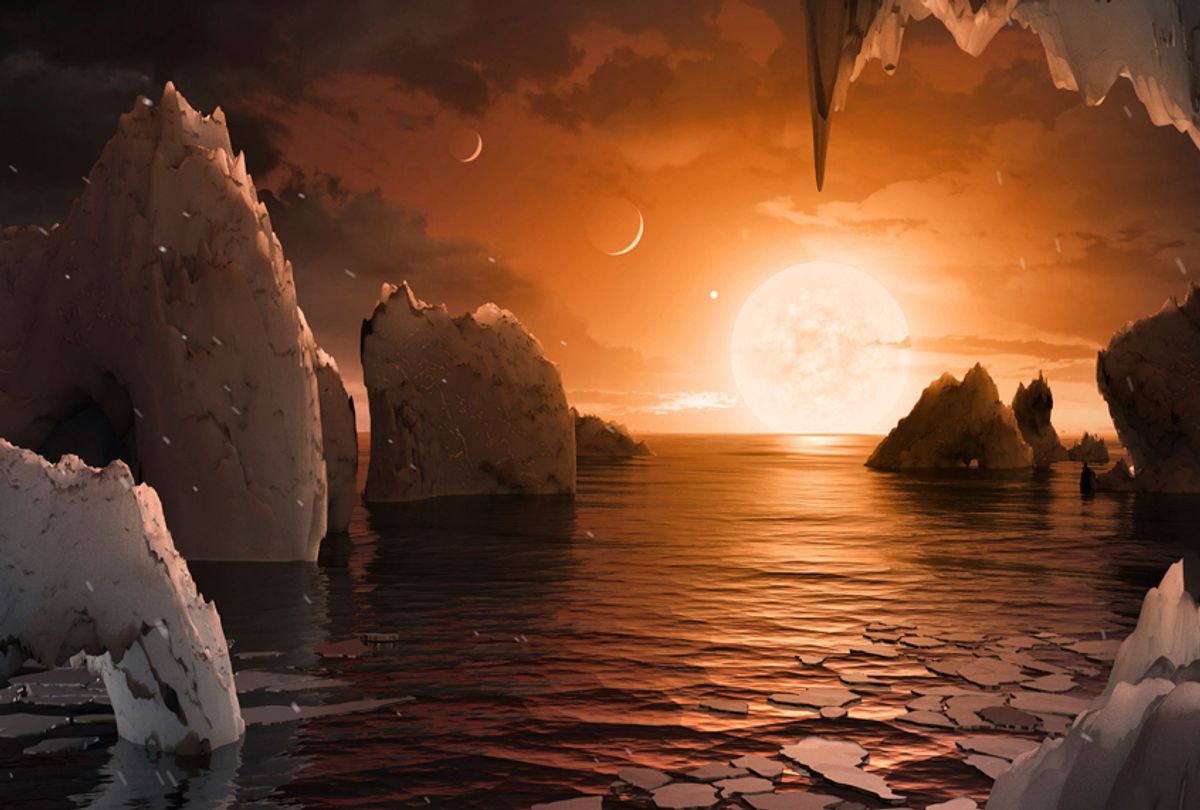 An artist's conception of what the surface of the exoplanet TRAPPIST-1f may look like, based on available data about its diameter, mass and distance from the host star. (NASA/AP)
--

New evidence has surfaced suggesting that exoplanet Kepler-186f could have changing seasons and a climate, much like Earth — a discovery that's exciting astronomers and leading to calls for newer, more detailed studies of this alien world.

If Kepler-186f sounds familiar, that's because it's been in the news before: the Earthlike world has been a subject of scientific inquiry since it was first discovered in April 2014, with the help of NASA's Kepler Space Telescope, which revealed it to be an Earth-size planet whose orbit is located within a habitable distance from its sun.

A new study published in the Astronomical Journal corroborates the previous findings and suggests there is even more reason to believe it could be an Earth 2.0. Using simulations, authors Yutong Shan and Gongjie Li analyzed the planet's spin-axis dynamics, meaning the relationship between the planet's axis of orbit relative to its orbit around its host star.

Spin-axis dynamics are intensely important to understanding the stability of a planet's climate, in particular whether it might make a habitable world. Earth is tilted at a 23 degree axis relative to its orbit around the sun, and historically it hasn't wobbled much past that thanks to the stabilizing force of the moon. Any further axial tilt, and much of Earth might end up permanently wreathed in darkness or basked in sunlight — which may have prevented life from forming at all.

Researchers also analyzed the spin-axis dynamics of a separate exoplanet, Kepler-62f, as part of the study. Kepler-62f also resides in the habitable zone around its host star.

“Our study is among the first to investigate climate stability of exoplanets and adds to the growing understanding of these potentially habitable nearby worlds,” said Li, an author of the study and professor at Georgia Tech Assistant Professor.

Axial tilts can be stable or unstable. For example, the axial tilt of Mars is unstable, meaning it has had vastly varying climates over millennia that have caused the ice on its surface to melt and move (as water) around the red planet. Li added this is one possible reason Mars has (probably) not been able to support extraterrestrial life.

“Mars is in the habitable zone in our solar system, but its axial tilt has been very unstable — varying from zero to 60 degrees,” he said. “That instability probably contributed to the decay of the Martian atmosphere and the evaporation of surface water.”

Li said the new findings — that the axial tilts of these exoplanets are likely stable — does not necessarily mean they are Earth or Mars duplicates. Indeed, our solar system is particularly unique in how the planets interact with each other.

“It appears that both exoplanets are very different from Mars and the Earth because they have a weaker connection with their sibling planets,” Li said. “We don’t know whether they possess moons, but our calculations show that even without satellites, the spin axes of Kepler-186f and 62f would have remained constant over tens of millions of years.”

In any case, those in the field see this study as more exciting data that has derived from the Kepler spacecraft's work.

“The finding of this paper is very interesting in suggesting that the obliquity of Kepler-186f may be as stable as that of the Earth,” Avi Loeb, the chair of Harvard University’s astronomy department, told Salon in an email. “This stability was an important factor that enabled life on Earth to develop its diversity and complexity.”

However, Loeb said, there are other factors that need to be confirmed before we get too excited.

“[T]here are many other required conditions for life: the delivery of water to the planet surface and having an atmosphere that would allow liquid water to exist along with the chemistry of life as we know it.” Loeb added. “If Kepler-186f has these ingredients, then it could host life as we know it.”

Seth Shostak, a senior astronomer at the Search for Extraterrestrial Intelligence, said it is an interesting study indeed, but said the real factors that will determine whether or not life is on these planets are biomarkers — specifically, the presence of gases like methane or oxygen.