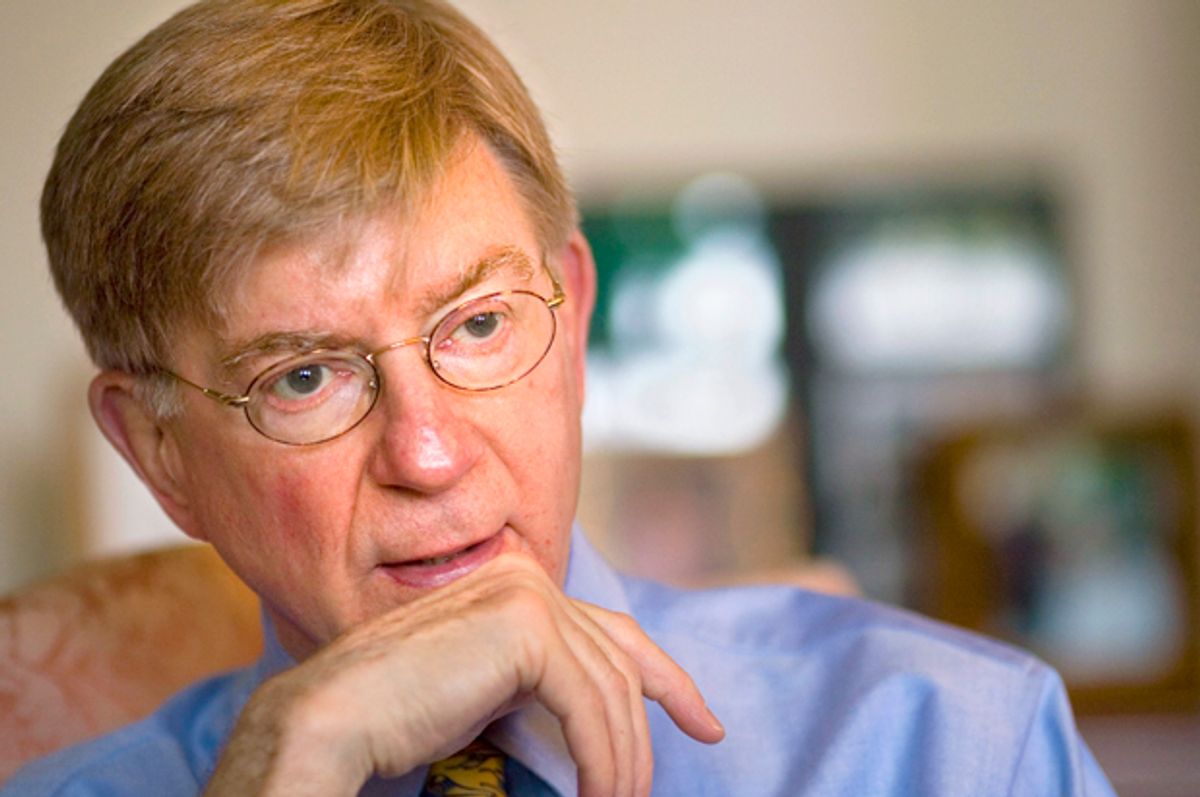 Conservative columnist George F. Will, who has been a pillar of the American right for decades, has just predicted that President Donald Trump's upcoming meeting with Russian dictator Vladimir Putin will be a disaster — and he cited Trump's failure during his summit with North Korean dictator Kim Jong-un as proof.

"As the president prepares, if this time he does prepare, for his second summit, note all that went wrong at the first," Will wrote at the start of his editorial. "If he does as badly in his July 16 meeting with Vladimir Putin in Finland as he did with Kim Jong Un in Singapore, the consequences could be catastrophic."

Will went on to describe how Trump had not only showered Kim with glowing praise despite the nation's abysmal human rights record, but also how Kim had managed to extract major concessions from Trump — including, of course, legitimizing the Kim regime by sheer virtue of holding the summit — and in the process exposed Trump as a weak negotiator.

To illustrate this point, Will quoted an editorial from the National Review by Nicholas Eberstadt of the American Enterprise Institute that harshly critiqued Trump's performance in Singapore.

North Korea, Eberstadt says, is committed to what he calls its “racial socialism,” which motivates Kim’s “central and sacred mission,” which is “nonnegotiable” — the unconditional reunification of the Korean Peninsula. This presupposes extermination of the South Korean state, which requires the policy Kim announced last New Year’s Day — to “mass-produce nuclear warheads and missiles and speed up their deployment.”

Eberstadt: “Such a program would not be necessary for regime legitimation, or for international military extortion, or even to ensure the regime’s survival: All of those objectives could surely be satisfied with a limited nuclear force. Why then threaten the U.S. homeland?” America is the guarantor of South Korea’s security, and if Washington can be made to blink at a time and place of Pyongyang’s choosing, the U.S.-South Korea alliance will end, as will the U.S. security presence there. Hence the delusional nature of Trump’s belief: One one-day meeting sufficed to cause the North Korean regime to abandon its raison d’etre.

As Will scathingly observed, "In return for Trump’s promise to halt military-readiness operations, Kim gave nothing — no inventory of his nuclear weapons and ballistic missiles, nothing beyond North Korea’s decades-old commitment to “denuclearization” of the Korean Peninsula, an opaque goal that means only that Pyongyang is not clearly committed to anything — beyond a pre-summit promise to decommission a no-longer-useable nuclear test site. The New Year’s Day vow has not been disavowed."

The most dangerous moment of the Trump presidency will arrive when he, who is constantly gnawed by insecurities and the fear of not seeming what he is not (“strong”), realizes how weak and childish he seems to all who cast a cool eye on Singapore’s aftermath. The danger is of him lashing out in wounded vanity. Meanwhile, this innocent abroad is strutting toward a meeting with the cold-eyed Russian who is continuing to dismantle one of Europe’s largest nations, Ukraine. He is probably looking ahead to ratcheting up pressure on one of three small nations, Lithuania, Latvia or Estonia, each a member of the NATO alliance that, for the first time in its 69 years, is dealing with a U.S. president who evinces no admiration for what it has accomplished or any understanding of its revived importance as the hard man in Moscow, who can sniff softness, relishes what Singapore revealed.

Will has long been an outspoken critic of Trump, leaving the Republican Party in 2016 because of his disgust with Trump's nomination and urging his fellow conservatives to make Trump lose all 50 states in that election:

Were he to be nominated, conservatives would have two tasks. One would be to help him lose 50 states — condign punishment for his comprehensive disdain for conservative essentials, including the manners and grace that should lubricate the nation’s civic life. Second, conservatives can try to save from the anti-Trump undertow as many senators, representatives, governors and state legislators as possible.

Will's recent arguments about Trump and the impact of a failed summit in North Korea were foreshadowed by two foreign policy experts who spoke to Salon in April. Laura Rosenberger, who was a foreign policy adviser for Hillary for America and works for the German Marshall Fund, explained at the time that Trump had backed himself into a corner by opening threatening military action against North Korea and then making a major concession by virtue of meeting with Kim.

"If you're the North Koreans, the meeting is one of the major things that you want to achieve," Rosenberger told Salon.

She added, "What Trump has done here is put that [meeting] at the front, without a clear sense of what the agenda is, having given up the leverage we would have by the fact of this meeting. That means the stakes here are extraordinarily high. The consequences of failure are quite significant, in the sense that ... once you have a meeting at the presidential level, you don't have much runway after that.

As she also pointed out, "One of the things that worries me is that if there is failure to reach agreement on at least the process moving forward — I can't imagine under any circumstance that they reach meaningful agreement on anything other than broad platitudes at the table — you need agreement on a process to work out these issues after the meeting. If that doesn't come about, given what we have already seen from this administration I think we risk falling off the cliff to a military option."