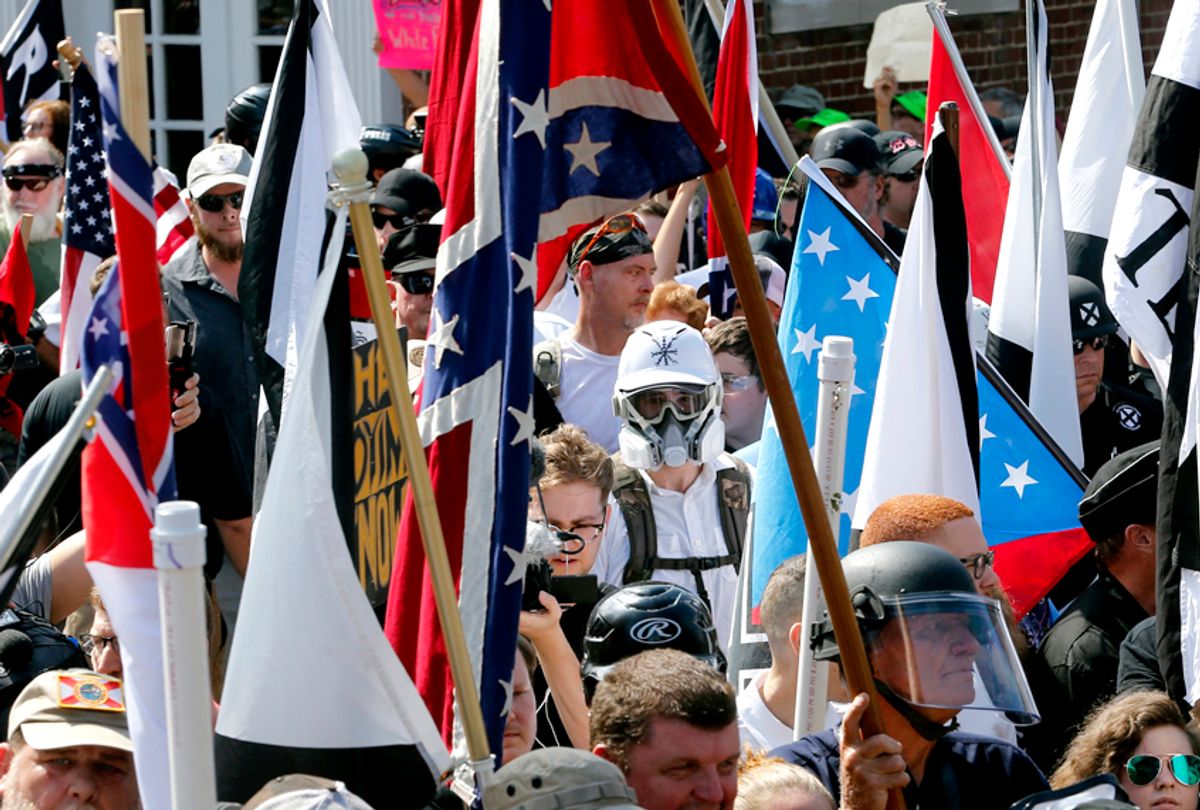 This report was originally published in ProPublica and is reprinted at Salon with permission.

There likely isn’t such a thing as a “typical” violent white extremist in America in 2018. Still, Michael Miselis — a University of California, Los Angeles doctoral student with a U.S. government security clearance to work on sensitive research for a prominent defense contractor — makes for a pretty unusual case.

For months, ProPublica and Frontline have been working to identify the white supremacists at the center of violent demonstrations across the country, including the infamous Unite the Right rally last August in Charlottesville, Virginia. The Rise Above Movement, a Southern California group that expresses contempt for Muslims, Jews, and immigrants, became a focus of that effort. ProPublica and Frontline were able to quickly identify a number of the group’s leaders, and find evidence that put them in the middle of violence in Charlottesville and Berkeley, California, among other places.

But one seeming member of RAM was harder to nail down. In video shot in Charlottesville, a bearded, husky man is seen in a red Make America Great Again hat with his hands wrapped in tape that came in handy for the brawling that occurred that day. During one encounter, the unidentified man in the red hat pushed an African-American protester to the ground and began pounding on him, video of the episode shows; moments later, a known RAM member choked and bloodied a pair of female counterprotesters. The possible RAM member also had turned up in video shot during hours of combat at a Trump rally in Berkeley, as well. Wearing protective goggles to ward off pepper spray, the man fought alongside RAM members, wrestling one protester to the ground and punching others.

Ultimately, ProPublica and Frontline determined the man in the violent footage was Miselis, a 29-year-old pursuing a Ph.D. in UCLA’s aerospace engineering program. Miselis was identified using video footage and social media posts, and reporters confirmed his identity in an encounter with him outside his home. In interviews, a number of California law enforcement officials said Miselis was a member of RAM.

In addition to his scholarly pursuits, Miselis works as a systems engineer for Northrop Grumman, the giant defense contractor with a plant in Redondo Beach, California.

When approached by ProPublica and Frontline in front of his home in Lawndale, a small city south of Los Angeles, Miselis said he “didn’t know anything” about what happened in Charlottesville.

“I think you got the wrong guy,” he said before driving off in his car.

Miselis did not respond to questions about his involvement with RAM. He did not answer additional questions sent by email.

Several current and former employees at Northrop Grumman told ProPublica and Frontline that Miselis has received a security clearance to work in a computer modeling and simulation group within Northrop’s aerospace division. Such security clearances are typically issued in a two-step process. The federal Office of Personnel Management conducts an investigation into the individual. The agency’s findings are then forwarded to a special unit within the Department of Defense, which makes the final determination on whether the person should receive a clearance, a status that often allows the person access to classified or otherwise sensitive information concerning national security.

Public affairs officers at the Defense Department declined to comment about Miselis and his security clearance. The federal personnel management office referred questions regarding Miselis to Northrop Grumman.

Northrop Grumman did not respond to several requests for comment. However, interviews with current and former Northrop employees, as well as an internal email, make clear the company knows of Miselis’ actions in Charlottesville and involvement with RAM. Miselis informed his superiors about his contact with reporters from ProPublica and Frontline, as is required by any individual who holds a higher-level security clearance, the people said.

So far, it seems, the company has taken no action against Miselis, who remains employed.

Keegan Hankes, an analyst with the Southern Poverty Law Center who follows RAM closely, said he was surprised that nothing has been done about Miselis’ employment and security clearance.

“They’re openly motivated by racism,” he added of RAM.

As ProPublica has previously reported, RAM first surfaced publicly last spring and has quickly established itself as one of the violent groups in the resurgent white supremacist scene; members, who regularly train in boxing and martial arts, have been documented engaging in a string of melees. Founded in early 2017 by Robert Rundo, a Queens, New York, native who served an 18-month prison sentence for stabbing a rival gang member six times during a 2009 street fight, the group’s core membership is small — 15 to 20 young men — but capable of real menace, ProPublica’s reporting has shown.

Rundo has recruited followers from the Orange County and San Diego chapters of the Hammerskin Nation, the country’s largest Nazi skinhead gang, and one the authorities say has been behind at least nine murders. One of the Hammerskins who joined up with RAM, Matthew Branstetter, went to prison in California in 2011 on hate crime charges for robbing and assaulting a Jewish man in an Orange County park. The attack left the victim with “a concussion, broken jaw, eye socket fracture, broken nose, cracked ribs, severe facial bruising, and cuts and bruises to his body and face,” according to a news release issued by county prosecutors at the time. Other RAM members have spent time in prison and Los Angeles County Jail on charges for robbery, firearms possession and other offenses.

The FBI has taken notice. Several law enforcement officials familiar with the bureau’s work said agents have opened a formal investigation into RAM. In a statement, the FBI said, “While the FBI neither confirms nor denies the existence of an investigation, our agents investigate activity which may constitute a federal crime or pose a threat to national security. Our focus is not on membership in particular groups but on criminal activity. The FBI cannot initiate an investigation based solely on an individual’s race, ethnicity, national origin, religion, or the exercise of their First Amendment rights, and we remain committed to protecting those rights for all Americans.”

Since last August, local prosecutors have brought charges against a handful of participants in the Charlottesville rally, successfully convicting several men so far, including activists on both sides of the clashes. Now federal authorities are targeting neo-Nazi James Alex Fields, the man accused of killing counterprotester Heather Heyer and injuring more than two dozen others. Federal prosecutors recently filed 30 charges against Fields, including 28 hate crime charges.

A native of Stockton, California, Miselis earned a bachelor’s of science degree in mechanical engineering from UCLA in 2011. UCLA’s website today lists Miselis as a Ph.D. candidate in the engineering department’s hypersonics and computational aero-dynamics group. After Frontline and ProPublica began making inquiries about Miselis, the school issued a brief statement saying only that he is technically on leave from the doctoral program.

Miselis was clearly prepared for the unrest in Berkeley in the spring of 2017. At the Trump rally he wore protective goggles to ward off pepper spray or tear gas, taped his hands up like a boxer, and wore a gray active-wear uniform, as did several other RAM members that day. In video footage reviewed by ProPublica and Frontline, Miselis can be seen fighting alongside other RAM members.

The event turned into a multi-hour street battle pitting Trump supporters, including fascists and extreme-right activists, against counterprotesters, some of them militant anti-fascists. Police made 20 arrests, confiscating knives, pepper spray, a stun gun, an axe-handle, and many wooden dowel rods, which were used as clubs by participants. At least seven people were transported to the hospital for their injuries. Rundo, RAM’s founder, was arrested and detained for assault on a police officer, but Alameda County District Attorney Nancy O’Malley declined to file charges. “We determined we didn’t have enough evidence to prove the charges beyond a reasonable doubt,” said Teresa Drenick, an Alameda County deputy district attorney.

After the Berkeley rally, Miselis traveled across the country to take part in the massive white supremacist convergence in Charlottesville, where his activities were photographed and recorded on video, both by professional journalists and other people equipped with smart phones. At the rally on Aug. 12, pictures taken by photojournalist Jason Andrew show Miselis walking alongside two other RAM members previously identified by ProPublica, Tom Gillen and Ben Daley.

At roughly 10 a.m., Miselis and the other RAM members confronted counterprotesters a few steps away from Emancipation Park, where white supremacists had gathered beneath a statue of Confederate Gen. Robert E. Lee.

Daley attacked two female counterprotesters, kicking and punching them, a scene captured in video obtained by ProPublica and Frontline. He wrapped both hands around the throat of one woman, throttling her until she fell to the ground, blood seeping from a gash on her temple. The other woman emerged from the incident with a laceration across her forehead. On video, she screams as blood drips across her face.

Miselis jumped into the fracas. In addition to Frontline and ProPublica, National Geographic produced video documenting the brawl.

A sequence of pictures shot by photojournalist Edu Bayer, who was on assignment for the New York Times, show Miselis hurling what appears to be a can of soda at a counterprotesters. In one photo he flexes his biceps muscles in celebration.

It’s this sort of street combat that worries the SPLC’s Hankes. In his view, such brazen criminal activity should be a red flag for both Northrop Grumman and the Pentagon.