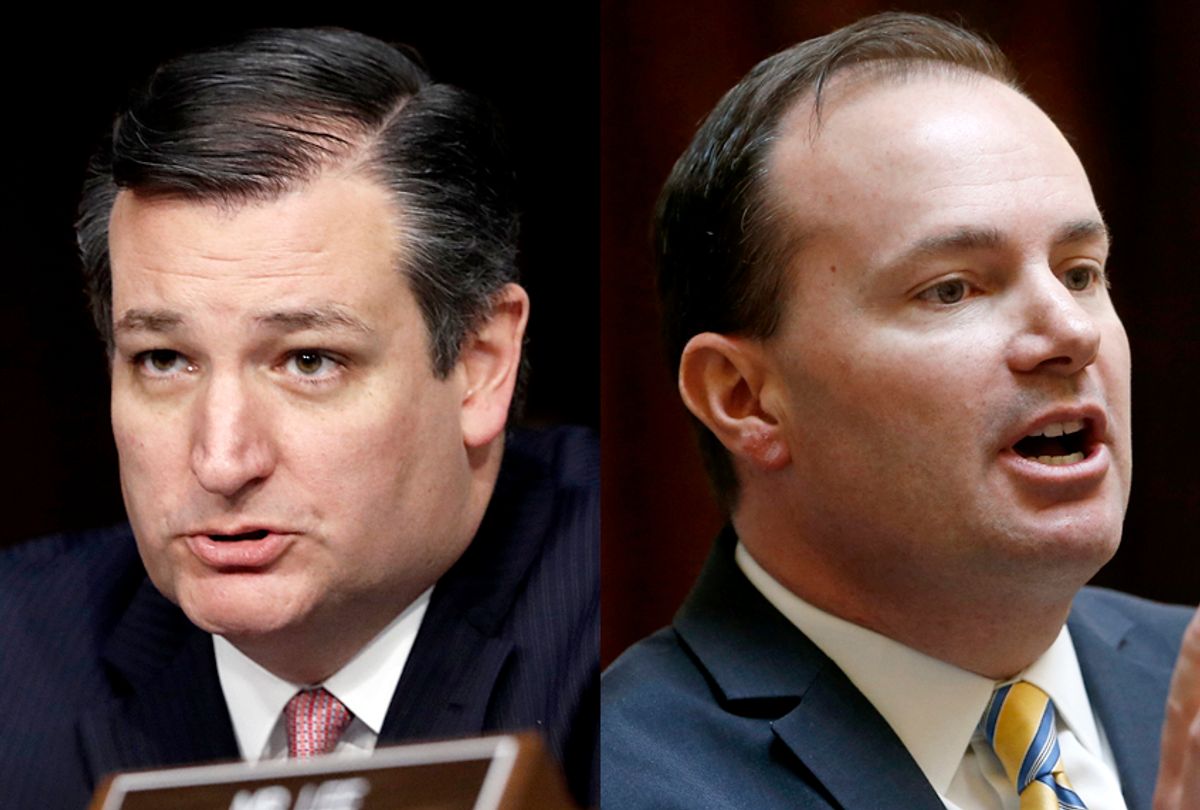 It sure seems like Sen. Ted Cruz wants to pick Donald Trump's second Supreme Court nominee. The Texas Republican is suggesting that the president fill the impending vacancy on the nation's highest court caused by Justice Anthony Kennedy's retirement with one of his closest friends — Sen. Mike Lee, R-Utah — and openly lobbying against another one of Trump's top contenders.

"Indeed, many of the worst liberal judicial activists, including William Brennan, John Paul Stevens, and Harry Blackmun – the author of the Roe v. Wade decision that legalized abortion nationwide – were appointed by Republican presidents," Cruz wrote in an editorial published in Fox News. "These mistakes haunt the legacies of presidents, a specter they can never shake. We cannot let this happen again."

After explaining that the reason so many Republican presidents wind up appointing liberal judges is that they have to base their decisions off of "the thinnest bodies of evidence," Cruz argued that Lee is a surefire conservative option that the president can appoint with the certainty that he would be qualified, would be confirmed by the Senate and would be consistently conservative in his rulings.

"Lee has served in all three branches of the federal government. He clerked for two federal judges, including Supreme Court Justice Sam Alito," Cruz wrote. "He was a federal prosecutor, general counsel to the governor of Utah, and has served his home state for the better part of a decade in the U.S. Senate."

Cruz also characterized the confirmation of Lee as a guarantee.

"As a U.S. senator, his nomination process would be simple and his confirmation would not be in doubt," Cruz wrote. "Sen. Lee has the respect and admiration of his colleagues, Republicans and Democrats alike. And even with Republicans’ slim majority, senators on both sides of the aisle would have little trouble giving their advice and consent to a nominee they have served alongside for years."

Cruz also expounded upon the conservative legal philosophy that he believes Lee would bring to the Supreme Court:

Lee would interpret the Constitution and laws according to their original meaning and text. He literally wrote the book on the lost clauses of our Constitution and how they protect our fundamental liberties.

A Justice Lee wouldn’t let activist lower courts distort the meaning of our laws and Constitution in order to impose their left-wing preferences on the nation. After all, who knows better that a judge’s job is to apply the law as it is – and not to legislate from the bench – than someone who was previously a legislator himself?

Mike Lee has a proven track record as a formidable advocate for the separation of powers, for federalism, for the Bill of Rights, and for a limited judicial role that adheres to originalism and textualism in judicial interpretation.

Cruz is also actively lobbying against Judge Brett Kavanaugh, one of the frontrunners to replace Kennedy on the bench. As Politico reported:

On a call with associates on Monday, Cruz warned that Kavanaugh is the sort of “unreliable” jurist by whom Republicans have been disappointed in the past, and he has worked to bolster the prospects of his colleague, Sen. Mike Lee (R-Utah). Sen. Tom Cotton (R-Ark.) also spoke to the president about the merits and drawbacks of each nominee, including Kavanaugh.

Cruz has been pushing for Lee since Kennedy's retirement was first announced.

"I think the single best choice that President Trump could make to fill this vacancy is Sen. Mike Lee. I think he would be extraordinary," Cruz told Fox News on the day of Kennedy's retirement. "You know, if you look back at Republican nominations to the court, Democrats have batted almost 1000. Just about every nominee they've put up there has voted the way they wanted on just about every single issue. Republicans at best bat 500."

Although Cruz has depicted his championing of Lee as being motivated primarily by ideology, it may not hurt that the two of them are also good friends. Lee was the first sitting senator to endorse Cruz's 2016 presidential bid, even though he did so at such a late stage that it may not have been enough to help Cruz's campaign. Then again, considering that Cruz is widely disliked by his fellow Republicans in the Senate, it may have been enough for him to simply be supported by Lee.

Indeed, Lee even criticized Trump in June 2016 in a rant that cited his anger at Trump's attacks on "my best friend's father" as part of the reason why he was reluctant to back the then-reality TV star's presidential bid.

Lee added, "We can get into the fact that he's wildly unpopular in my state in part because my state consists of people who are members of a religious minority church — a people who were ordered exterminated by the governor of Missouri in 1838 – and statements like that make them nervous."

"Now look, these things are not something that I couldn't get over if I heard the right things out of him. But if you want to know why it is I have concerns, I can go on if you like."

If Lee is confirmed, he would join the rare rankings of American Supreme Court justices who are better known for their careers in non-judicial and elected offices. Although William Howard Taft had served as a judge on the United States Court of Appeals, he was better known as a former president when he was appointed as Chief Justice of the Supreme Court by President Warren Harding in 1921. Similarly, Gov. Earl Warren of California was best known both for his career in gubernatorial politics and serving as Thomas Dewey's vice presidential running mate on the 1948 Republican national ticket when he was tapped to be Chief Justice by President Dwight Eisenhower in 1953.

Despite these famous precedents, NBC News reported that Amy Coney Barrett, Brett Kavanaugh and Raymond Kethledge — all of them judges — are on the president's shortlist for the nomination.