At Just Right Farm, Plymouth Rock is a site for culinary pilgrims 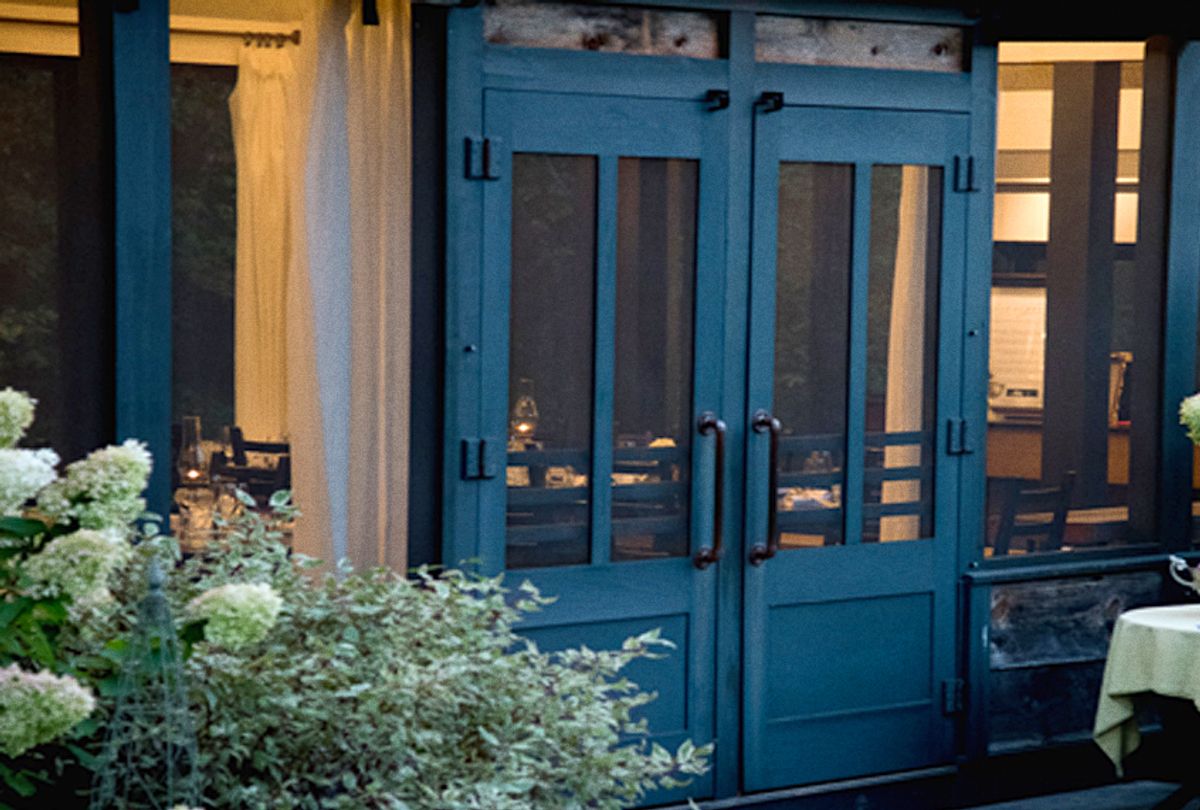 Kimberly Russo, chef and owner of Just Right Farm in Plympton, Massachusetts, likes to say that what she does is “the same thing that women have done from millennia, which is drop a seed in the ground, come back and get what grew and use it to feed family and friends.”

But that’s a little like saying Eric Ripert cooks fish.

Russo was generous enough to host me at her home last weekend, which is also her farm, and which on Friday and Saturday evenings, is her restaurant, too. When I woke up on Friday morning, sometime around seven, Russo was in the stand-alone screenhouse — where she serves a five-course BYO dinner to about thirty guests for $140 — adjusting the storm curtains that get rolled down only on rainy nights.

“Stand over there,” she instructed. “Do they look even?”

They looked perfectly symmetrical to me. But Russo wasn’t convinced. I had snapped a picture of the screenhouse/dining room the night before and shared it on Instagram. To me, it was a lovely tableau of peonies and oil lamps on the handsome wood tables Russo built herself. Out the windows, dusk tinted the ash trees a deep green. But Russo saw the picture and thought, the curtains are uneven. She is a perfectionist. Under her exacting eye, everything is just right at Just Right Farm.

In 2004, Kimberly and her husband Mark Russo fell in love with a 300-year-old red farmhouse down a long driveway on the South Shore of Massachusetts, about a dozen miles from Plymouth Rock. The rural peacefulness reminded Kimberly of her childhood home in Kentucky, and the woodlands resonated with Mark’s mindfulness practice — Mark, a veterinarian by trade, built a labyrinth on the property and a yoga studio above the woodworking shop.

The house needed a whole lot of work. Kimberly, a woodworker, was up for the challenge. She set up a woodshop first, in what is now the living room, and eventually in a smaller building on the property. She made wall panels, tables, shelves and furnishings. She built her dream kitchen, with post and beam double-tall ceilings outfitted with skylights. There’s a big round table with comfy chairs where Kimberly answers her cell phone to take dinner reservations. If you want to come for dinner, you’re going to talk to Kimberly. If you want to come back again, she’s probably going to remember you.

Russo didn’t plan to open a restaurant in her home. She spent the first years restoring, rebuilding and planting her farm, including rows of fresh flowers, vegetables and a peach orchard. The couple became deeply involved in the town, joining the historical society and participating in local government.

In 2012, Kimberly was ready to go back to work. “I had worked too hard making this place perfect to leave every day,” she said. Kimberly had cooked at a yoga retreat, owned restaurants in Kentucky and nearby Duxbury, Mass and run a garden design business. Just Right Farm was born — the synthesis of “all the things I do best.” Plus, Kimberly loves that she “can wake up at 6 a.m., come downstairs in my jammies, and put the water on for grits.”

If working from your own kitchen sounds like a fantasy, it’s not all jammies and grits. At 11 p.m. when the last guests are still chatting and you’ve been up since the small hours cooking and managing and gardening and all you want to do is curl up in bed, it’s seriously tough. Seriously tough, yet profoundly rewarding. Kimberly loves what she does.

Last Friday, I got to experience a night at the farm, which is a sort of restaurant meets dinner party meets agritourism destination. At 6 p.m., the first guests arrive. They bring their own champagne and Barolo and vodka — Just Right Farm supplies mixers like berry shrub, tomato basil water, and grapefruit juice spiked with lime and tarragon. Drinks in hand, they wander around past the raspberry bushes and feed the four goats leaves from nearby trees. Or they settle into Adirondack chairs under one of those gigantic ash trees near the greenhouse.

At seven, Mark invites everyone into the screenhouse. Kim carefully picks out where everyone is going to sit, like a conscientious dinner party host. I’m a little self-conscious about dining alone in such a social milieu, but the two couples next to me share their wine, and by the end of the night we’re laughing and following each other on Instagram.

Kim gathers up the staff and introduces her team. They’re mostly women and they’re all impressive: Marilynn Browne, who bakes the bread, makes sorbet and grows eggplants, peppers and tomatoes (some 37 varieties) at her own farm nearby, is retired from her job as a Bureau Chief at the Massachusetts Department of Revenue. Emma Kella, Just Right’s sous chef, has cooked her way around Manhattan and Brooklyn restaurants. Kimberly loves when people find out the parking lot attendant is her husband “and usually the most educated person in the room.”

After her spiel, Kim runs back to the kitchen, does a quick outfit change (out of her nice host clothes and into a work shirt and an apron) and gets down to it. In the screenhouse, the food starts arriving.

If Kimberly has a signature dish, it’s her creamy grits, and tonight she serves them as an amuse bouche, topped with a pile of just-wilted greens. Next there’s a bowl of two fat pork ravioli, crunchy with breadcrumbs. A curried carrot soup the color of a blazing sunset is poured tableside over toasted coconut. Then farm lettuces arrive, with sweet peas in their shells and dense garlicky labne, and then in succession: Marilynn’s chili and olive bread with rosemary butter, a shot glass of tarragon lemon sorbet and the main course — seared cod with bok choy in a nage, bright green with herbs. After a strawberry semifreddo, Kimberly comes around to serve each guest a slice of her famous chocolate ganache tart, gilding the lily.

Outside, the fireflies start to light up the farm with their pinprick twinkles. Happy and full, the guests find their way back to their cars. In the kitchen, Kimberly kicks off her sparkly sandals. She doesn’t drink, but she makes sure her staff all have a glass of wine and something to eat — tonight there’s leftover cod, grits and greens. They sit around the kitchen table. Someone turns on bluegrass and Kimberly sings along. There’s the clink of clean dishes being put away. The almost full moon shines over the skylight. A lot of things feel, well, just exactly right.