The return of "Yellow Submarine": Why even people who aren't Beatles mega-fans love it

The 1968 animation classic will screen again in theaters this year. Its secret weapon? Its refusal to play happy 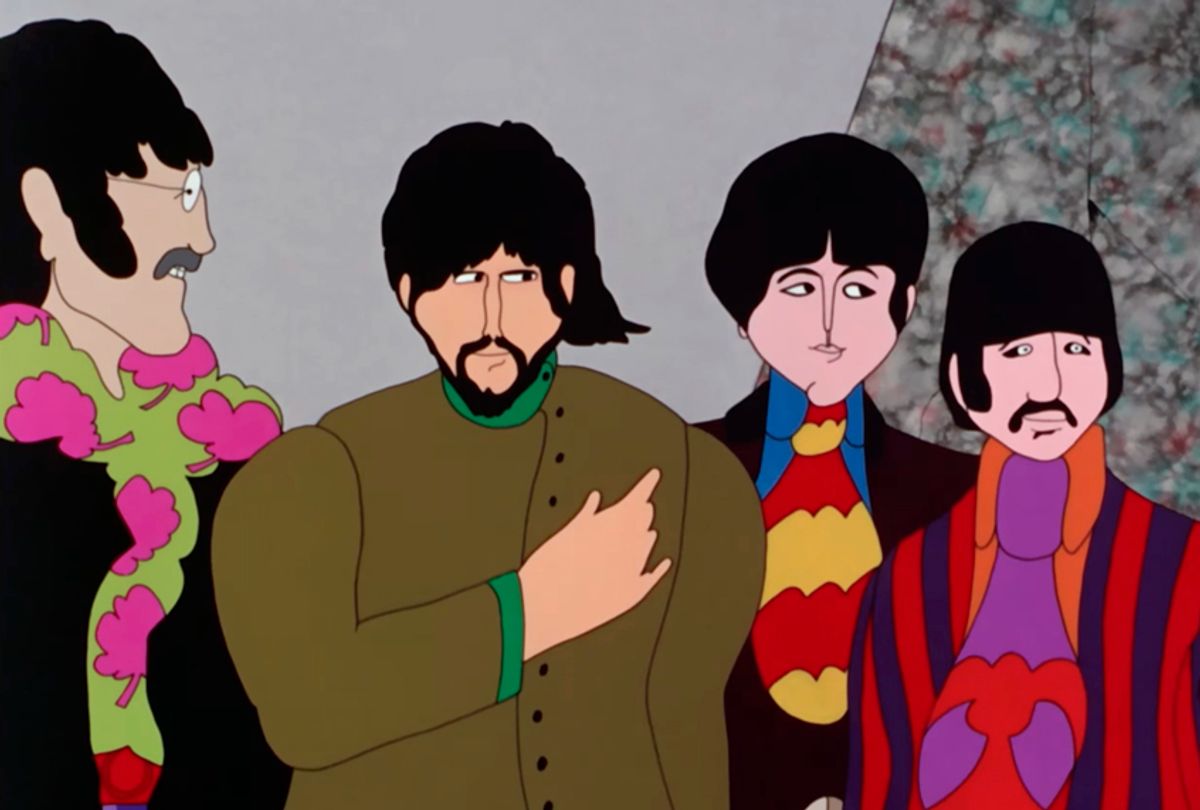 Dusting off a rarely heard, seen, or read treasure of yore is always bound to send Beatles people into a tizzy, as will be the case come the fall with the release of a vastly expanded version of 1968’s White Album. Beatles people, even for how voluminous their number is, can be clannish. Dare to write something that evinces any criticism of the art of their heroes, and the brickbats are coming your way. A lot of Beatles fans espouse being part of that community, where it’s also fun to like something that others like, which can make for a kind of bonding across generations, continents, world views. But what particularly interests me is when there is a Beatles-based work of art that holds as much appeal — maybe even more appeal — for people who could not give a single chorus of “Yeah yeah yeah” about the boys from Liverpool.

And so we come to another work from 1968, the animated film "Yellow Submarine," which is also coming to theaters here in July. "Yellow Submarine" rarely screens in theaters, as a print just has not been made available for movie house circulation in some time. You can watch it on Blu-ray, of course, but that’s not quite the same. My own Beatles viewing history began with "A Hard Day’s Night," which gave a pre-sexual teenager a hit of euphoria and possibility that bordered on a kind of emotional and spiritual orgasm. You watch that scene where the band busts out of the TV studio, hightailing it down that fire escape, as “Can’t Buy Me Love” absolutely cranks on the sound system, and you have a new notion of what freedom means. It was, in some ways, my first and greatest rock and roll moment. Then I came to 1965’s "Help!," a hugger-mugger blend of James Bondian tropes, with a somber air, as with the recording studio sequence, in that smoky half-light, when the band run through “You’re Gonna Lose that Girl,” one of those songs of theirs that made the subjunctive into a matchless form of person-to-person musical potency.

But then there is "Yellow Submarine," which the Beatles had next to nothing to do with, save gathering themselves together—in non-animated form — to shoot a short scene in a theatre as a cheeky coda. The truth was, the Beatles were busy making "The Beatles" — aka, that aforementioned White Album — and had zero belief that a film of them in cartoon form would mean anything of any artistic merit.

What I love best about "Yellow Submarine" is that it has nothing to do with that kind of “rah rah! Go Beatles!” ardor that was a staple of the attempts to market them, which is what pop films were at the time, these exercises in spreading the word about a band or singer, even if they didn’t need it (for example, the Elvis films). For the central theme of "Yellow Submarine," the core vibe — and one that is celebrated, even — is its melancholia. We put a lot of effort into pretending to be happy, these days more than ever, thinking that the people around us, and on social media, who wage one-person campaigns to fete their own happiness, are actually happy, and that we need to keep up. It enervates us, makes us more alone, compromises the quality of the alone time we have, which becomes given over to despair, fretting about all of the things we are not, rather than looking inward, assessing what we see, what we are fortunate to have and be able to grow, so that we can grow.

"Yellow Submarine" opens with a borderline-disconsolate Ringo Starr wandering the streets of Liverpool, bemoaning that nothing ever happens to him. Typically, animated films jump from the screen right at you, like they’re trying to give you a big coloristic hug to pull you in, but everything here is slightly washed out. When we hear happy music, it’s almost always in a major key. This is the visual version of a movie being in a minor one.

But despair not! Melancholia can be cool, as the people of this film knew, and it need not get you down for too long and can, in fact, be a springboard to contentment, if not that kind of chest-thumping ebullience we see so often now on social media. The titular submersible pops out from behind a column of Industrial Age architecture, and our adventure is about to begin. There is a man named Fred — coincidentally, the same name as John Lennon’s father — who plays in a Salvation Army-type band straight out of “Strawberry Fields Forever” who lives in a place called Pepperland. In Pepperland there is a kind of low-key happiness, not the full-throated shout of the world of fans when their team scores, but rather something more humanistic and peaceful, like when one takes an early walk on the first warm spring morning and, despite the tribulations of life, feels a burgeoning hope, a sense for a future.

This Pepperland has been overrun by the Blue Meanies, who number among the most amusing villains in all of cinema. They are these fat-assed blue blobs, with gimlet seal eyes and copious amounts of fur, part orbular Cookie Monsters, part Star Trekian Tribble. And they bitch about everything.

That’s one of the great things about "Yellow Submarine": the characters don’t like their job, their lot in life, and eventually, when they just become cool with the melancholia, and go with it, rather than shake a perpetual fist, burdens begin to lighten. One of the main Blue Meanies is reprimanded because he erroneously answers a question from his boss — addressed as “Your Blueness” — in the affirmative, and if you’re a Blue Meanie, you can’t say “Yes, this sucks, and it is great that it sucks,” you have to say, “No, this doesn’t not suck, and it would be bad if it didn’t suck.” They are very particular about these things, you see.

You probably know people like this. Only, they call it “snark.” Don’t they tire you out? Right? Then they expect the same from you, so that you’re speaking their language, and you want to shout, “Dude, it’s OK to like things!” But give it up for the Blue Meanies, because they do seem to revel in their doldrums, and life is just like that sometimes, and you have to let it be that way, and select your battle for another time. The good old citrine sub picks up the Beatles to save the day, and, also, a character named Jeremy, who is of the species of Boob. That’s right, he’s a Boob. He’s kind of shaped like a distended actual boob, but fur-coated. Nightmare boob? He’s having an existential crisis, a la Ringo, when the Beatles pick him up, burdened by being an autodidact genius, which has its uses, and its problems.

Melancholia is not the same as depression. The latter can be a bramble-strewn path, untouched by even a ray of moonlight, which we cannot travel down. At least not without some help, from wherever, or whomever, that comes. Melancholia is more like that same path, cleared of underbrush, with only a stone or two to be aware of, that you navigate in the dusk to get home again. And that’s what "Yellow Submarine" is really about. It allows you to go with those feelings, because it, and its characters, are going with them, too.

There’s a lot less pressure to feel ebullient when you watch this movie, and I bet that that’s one hell of a powerful experience in a theater, with a group of people who have decided to spend an hour and a half in a different kind of nautilus that plunges into the beckoning depths. Hell, it even works out for the Blue Meanies, and give a big thumbs up for melancholia, and the good that can happen when you just go with your sadness for a bit.