Brexit blows up: Boris Johnson's resignation is very bad news for Theresa May — and Donald Trump

With less than one year before Britan is scheduled to leave the European Union, two top Brexiters exit office 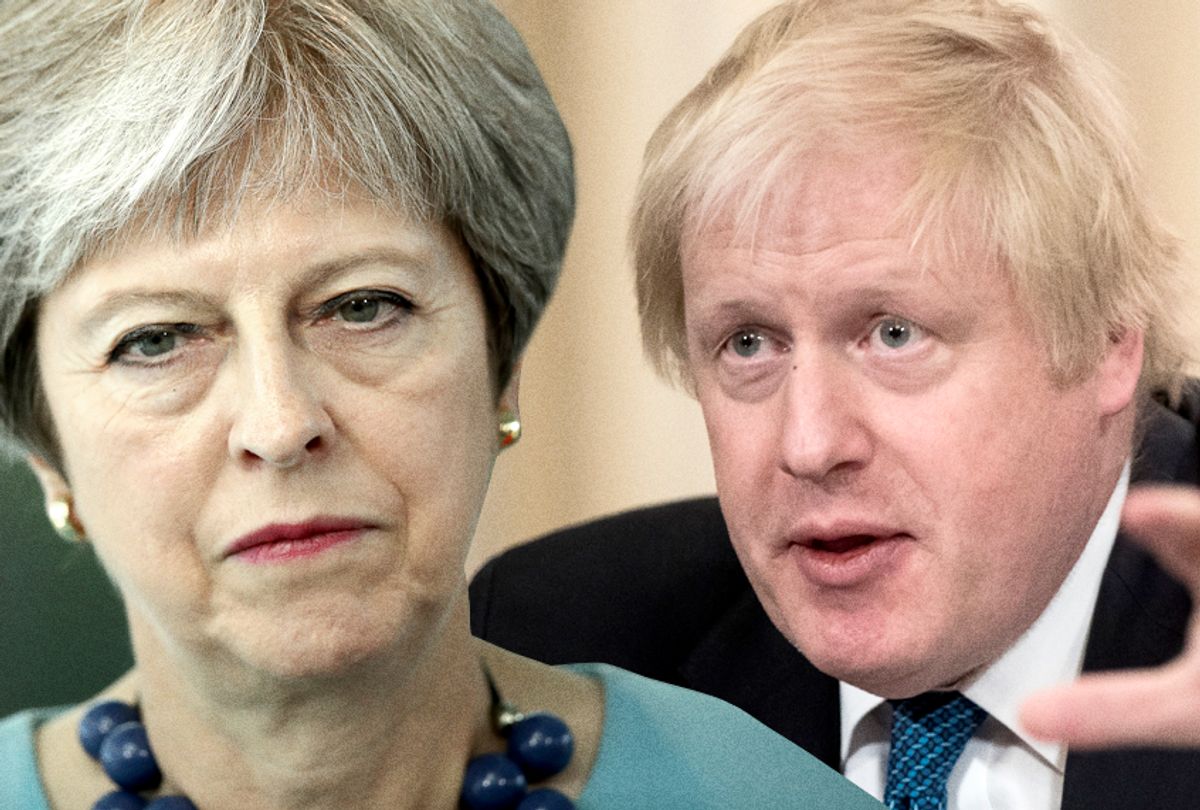 In less than one year, the United Kingdom is scheduled to exit from the European Union. But on Monday, British Prime Minister Theresa May suffered a major blow to her administration when two top Brexiters opted to exit from her cabinet. May's foreign secretary, Boris Johnson, hours after the resignation of Brexit Secretary David Davis. Both men resigned to protest May's handling of the UK's impending exit from the EU.

Both Davis and Johnson left because, according to May, they did not agree on the best path for honoring the results of the Brexit referendum in 2016. With Johnson's departure, however, May faces more than a sign of disagreement from one of her top officials; because Johnson was such a conspicuous supporter of the Leave movement in 2016, his departure could be interpreted as a sign that May is no longer regarded as the ideal political leader to manage the Brexit process at this time. She initially campaigned against a so-called hard exit from the EU.

The underlying division is between moderate conservatives, like May, who want a less severe and disruptive cessation of relations with the European Union and the more extreme conservatives, like Johnson and Davis, who want a radical altering of the UK-EU relationship.  As the BBC's political editor Laura Kuenssberg put it, if May doesn't abandon the "soft" Brexit plan agreed upon at Chequers "another minister will go, then another, then another, then another."

The major issues separating the two sides here range from the status of trade policy to the European Court of Justice and the free movement of people between the two policies. May's Brexit plan is perceived as having been more on the moderate side of the equation, as The Washington Post explains:

On Friday, Johnson called May’s new plans for exiting the European Union a big pile of excrement and suggested that it would be difficult for hardcore Brexit-backers like himself to support her strategy. His departure hints at the possibility that he may mount a leadership challenge.

Johnson’s allies say he did the honorable things by resigning. His critics see selfish maneuvering.

The surprise resignations expose May to pressure from restive Conservative party members outraged over what they see as the prime minister’s plan for a “soft Brexit” that keeps Britain tied to many E.U. rules and regulations after it leaves the bloc in March.

Hard-line Brexit backers — who want May to seek a clean, decisive break from Brussels — were in open revolt over her recently revealed proposals. They denounced the latest road map as a timid capitulation: “Brexit in name only” that ignores the 52 percent of voters who opted in June 2016 to leave the European bloc.

All of May's troubles come just as she prepares for a closely-watched visit from President Donald Trump this week.

Given that Johnson controversially joked last month that Trump would do a better job of negotiating Brexit than May, the timing of Trump's long-awaited visit may be oddly appropriate:

“Imagine Trump doing Brexit,” Johnson told his audience of Tory activists. “He’d go in bloody hard … There’d be all sorts of breakdowns, all sorts of chaos. Everyone would think he’d gone mad. But actually you might get somewhere. It’s a very, very good thought.”

Trump's impending trip to the United Kingdom is not without its own headaches. British police are planning the largest mobilization of officers since the riots of 2011, according to The Guardian, with one chief constable telling the paper that the resources they're requesting are on par with what would be required "if London was burning down." As The Guardian describes it, the British police will be expected to pull much more than their usual weight when Trump arrives, even though their manpower has been cut since 2010.

The original planning was for 6,000 officers, deployed within about 300 police support units, which would comprise one inspector, three sergeants and 18 to 20 constables.

It is understood that about 4,000 officers will be mobilised, to support colleagues in the areas Trump is visiting, and that some forces in other regions have restricted leave so their officers can make up the numbers.

Even if Trump's trip to the United Kingdom goes off without a hitch, it is notable that he is not being feted with the same pomp and affection as previous presidents who visited that country, according to the BBC. Presidents John F. Kennedy and Jimmy Carter were both greeted by cheering crowds, while Dwight D. Eisenhower was invited to stay with the queen at Balmoral (the only president to receive that honor), Ronald Reagan was personally invited for a stay at Windsor Castle and George W. Bush became the first president to spend the night at Buckingham Palace since Woodrow Wilson.

Trump, by contrast, is expected to be given a cup of tea when he passes through Windsor and will briefly visit the prime minister's country residence, Chequers. He will then visit Windsor and finally Scotland, after beginning his trip in London.