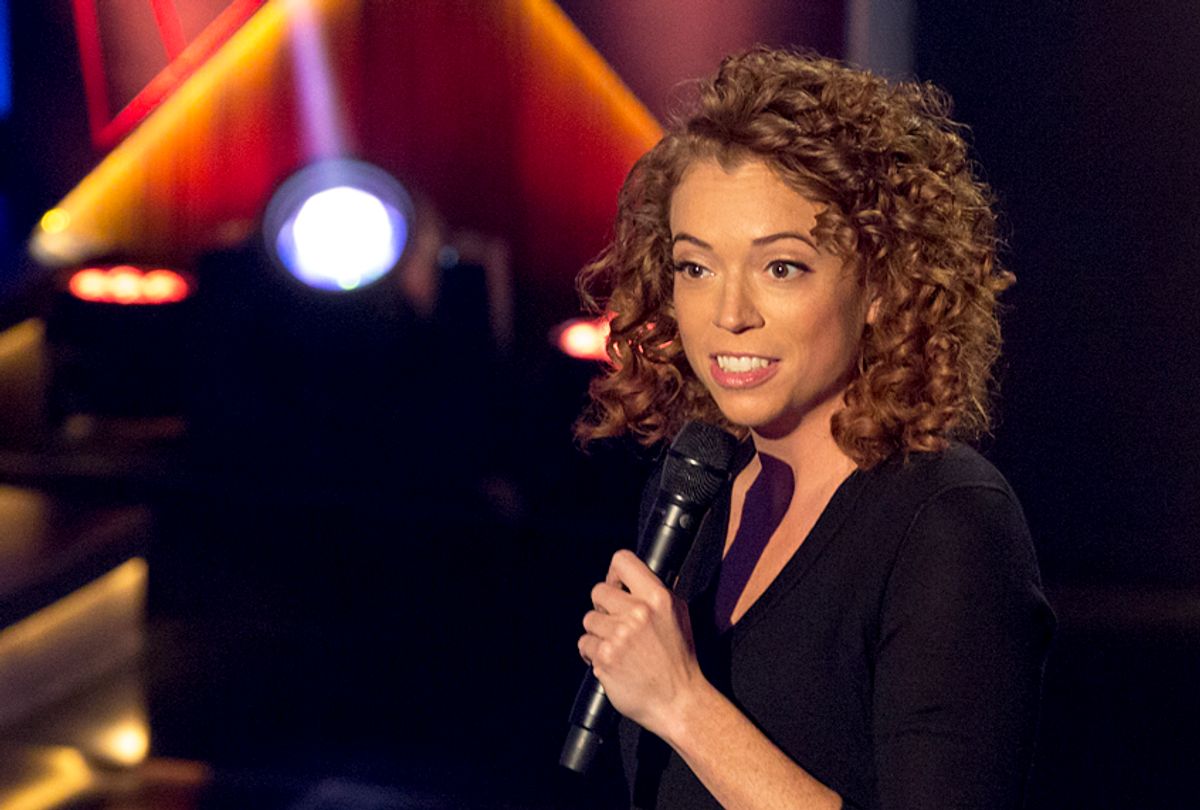 During Michelle Wolf's latest episode of "The Break," the comedian responded to the news that Supreme Court Justice Anthony Kennedy was retiring. In an important segment titled "Salute to Abortions," Wolf reflected on what's at stake given President Donald Trump's power to appoint another, likely more conservative justice, and the potential of overturning the landmark case for women, Roe v. Wade.

"Although it’s great for his wrinkly head," Wolf said of Kennedy, "it could be catastrophic for reproductive rights."

She added, "It’s so ironic that Trump could be the guy who ends legal abortion. That dude has been responsible for more abortions than the invention of back alleys. We were originally going to use 'coat-hanger,'" Wolf quipped. "And before that, 'stairs.' Just letting you in on the writing process."

Beyond warning of what a Trump-appointed Supreme Court justice could mean, Wolf also targeted pro-life propaganda more generally, and the stigma and misinformation that an abortion still carries.

"Look, access to abortion is good and important," she continued. "Some people say abortion is 'killing a baby.' It’s not. It’s stopping a baby from happening. It’s like 'Back to the Future,' and abortion is the DeLorean."

"And I know some people call themselves 'pro-life,'" Wolf added, "but pro-life is a propaganda term that isn't real, like healthy ice cream and handsome testicles." According to Wolf, "these people are anti-abortion, which means they're anti-woman. If these people were actually pro-life, they would be fighting hard for health care, child care, education, gun control and protecting the environment."

"But these anti-abortion people do not care about life, they just care about birth," she said, adding that roughly one in four women have an abortion before the age of 45, "which means abortions are super common and the stigma is bullshit."

The Netflix host said she's in favor of "Abortion on Demand," a slogan from the women's movement, and said that abortions should be truly "as easy and safe as pushing the on demand button in the middle of your remote to order 'Paddington 2,'" she continued.

The segment wasn't just for women, though; Wolf also made an attempt to include men in the conversation by addressing them directly:

Now men, I’m sure this brings up a lot of feelings and thoughts and points you want to make, and I just want you to know that’s all very irrelevant. Abortions are a woman's right. And I know acknowledging that is hard for some of you because that would mean you'd also have to acknowledge that women are naturally equipped to do the most powerful thing in the world: give life. While you guys are naturally equipped to do what? Lift suitcases into the overhead compartment?

But if women were to embrace that fact, that they control life, she continued, "that makes it a lot harder for men to control women. Of course men are uncomfortable with that. They won’t even let us control a little bit of 'Star Wars.'"

For the critics, Wolf reminded viewers that this segment and fight are personal. As a woman with money, she said, she'll always be able to get an abortion. But that shouldn't be the standard. "Abortion shouldn’t be a luxury," she said. "It shouldn’t be the new, 'I summer in Montauk.' It should be on the dollar menu at McDonald’s!"

In light of the July 4th holiday, Wolf concluded the segment with a full-on "Salute to Abortion." Dressed in an American flag leotard and leading a small marching band, she encouraged women who want or need an abortion, to "get one!" And for the woman who want to be pregnant, "don't get one!" Each salute was accented by a toss of confetti, but the point is, it's a woman's choice. "God bless abortions," she said, "God bless America!"

"The reality is, women have abortions" — even on TV

Tracing the evolution of abortion on TV, from "Maude" to "Crazy Ex-Girlfriend."