Game show "Paid Off" targets the student loan crisis: A subversive warning about a looming emergency

The TruTV show pays off each winner's student loans, and highlights how oppressive student debt is 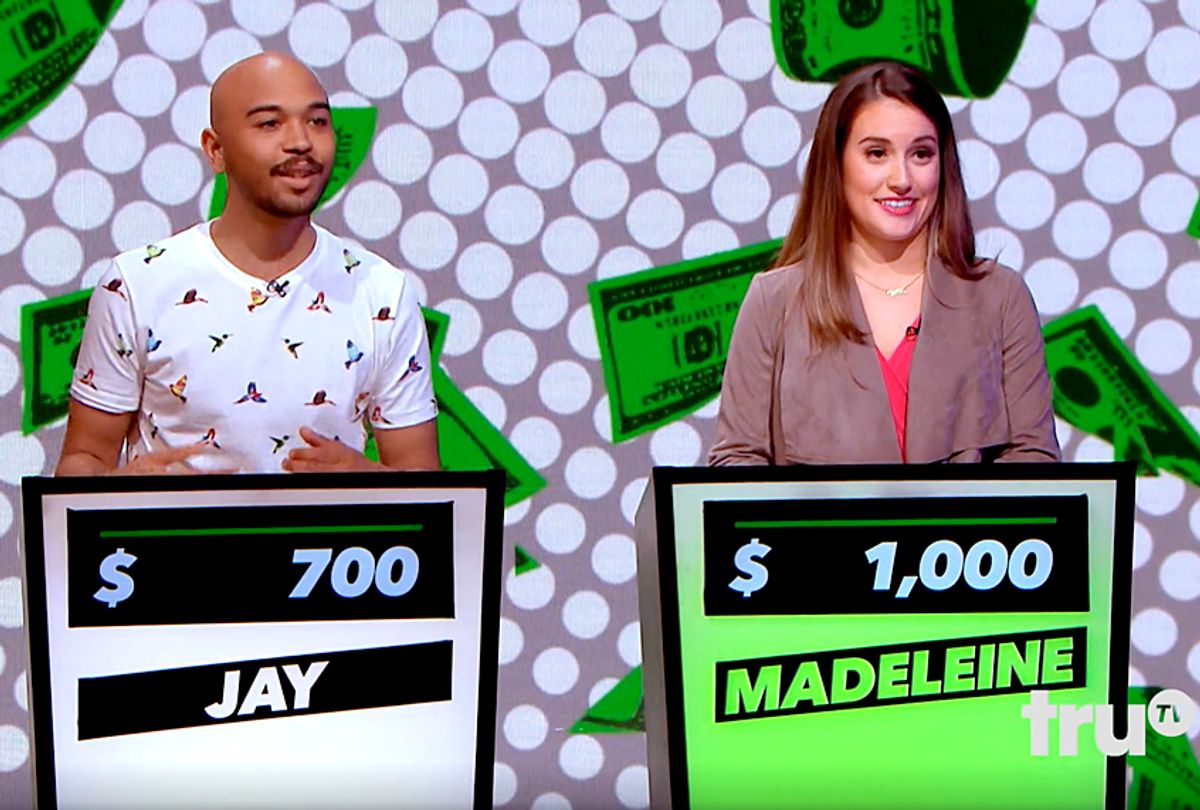 "Paid Off with Michael Torpey" (truTV)
--

In an obligatory banter segment that’s a fixture of all game shows, “Paid Off” host Michael Torpey asks a contestant what her dream is. She replies that she’s been writing since she was in fourth grade and creating art since she was in middle school. She wants to combine her passions to become a magazine editor.

Before that can happen, however, there’s the small matter of this college graduate’s residual debt to pay off — all $12,583 of it.

“Debt holds you back, and you can’t take those risks,” Torpey says. “I get it.”

"Paid Off" is a savvy and depressingly relatable game show that, like other unscripted series before it, springs from an urgent need.

When America hunkered down and engaged in furious nesting in response to our post-9/11 military escalations in the Middle East, ABC offered the soothing feel-good balm of “Extreme Makeover: Home Edition,” where we watched financially desperate families get a break via luxury remodel.

NBC attempted to capitalize on this with the short-lived “Three Wishes,” which basically surprised people experiencing tragedy with mollifying gifts of new stuff and extravagant experiences.

“Paid Off,” in contrast, is a warning about an impending financial crisis disguised as a game show, festooned in sound effects and zesty energy. Contestants, who appear to be in their 20s and 30s, stand behind podiums and answer questions for cash and points, competing for a grand prize whose size varies from week to week but is fair nevertheless. The relief said winnings stand to bring is more or less the same regardless of the amount, which is a total pay off the contestant’s student loan debt.

Now to anyone who hasn't seen an episode, this may seem akin to stepping up to a stabbing victim sporting a gushing wound and offering to kiss it to make it feel better. That said, “Paid Off” has a potential  contestant and viewership pool of 45 million Americans collectively shouldering nearly $1.5 trillion in student loan debt. And it taps into a crisis significant enough to be a viable pillar of political platforms held by elected officials such as Bernie Sanders and Elizabeth Warren, and candidates like Alexandria Ocasio-Cortez.

READ MORE: Women’s anger is not to be ignored

This is top-of-mind for so many Americans for reasons other than the dreaded monthly bills from Sallie Mae: student loan debt is an anvil cited as a major reason millennials aren’t saving for retirement, or having children right away. The average monthly student loan payment for an American college graduate between the ages of 20 and 30 years is $351, a hefty amount for people just getting started in their careers and struggling to afford basic necessities like rent, along with those everyday luxuries such as food and electricity.

According to a recent study conducted by the Brookings Institution, nearly 40 percent of borrowers may default on their student loans by 2023.

Sixteen episodes have been planned for this first season of “Paid Off,” but with a problem as hefty as this one, it's easy to imagine the show being flooded with anxious audition queries for a potential second.

As Torpey tells that contestant, he actually does get it. “Paid Off” works because of its host's front-facing empathy. And "Paid Off" exists because of its host’s own experience with student loan debt. “Orange Is the New Black” fans may recognize Torpey as one of the most despicable corrections officers at Litchfield penitentiary, Thomas Humphrey. He has a semi-regular gig, in other words.

But every character actor contends with a long string of ramen days. And Torpey’s were complicated by the substantial debt his wife hoisted as part of earning her undergraduate and graduate degrees.

Torpey reveals in the opening moments of the “Paid Off” premiere, airing Tuesday at 10 p.m., that the couple was only able to wipe their debt slate clean “because, true story, I booked an underpants commercial,” he said. “But what about the other 45 million Americans with student loans? Sadly, there just aren’t that many underpants commercials.”

Though TruTV describes Torpey as a comedian, his hosting style edges more toward the affable than consciously angling for the punchline, because he’s well-aware of how absurd it is that this series exists at all. “Paid Off” isn’t merely the result of a great pitch, although TruTV and Turner take it seriously enough not only to fund the prize money but to have brought on a veteran of “Who Wants to Be a Millionaire,” Leigh Hampton, as its showrunner.

“Millionaire,” though, is a game show that treats intellect and erudition like a meritocracy. The general knowledge questions have a pop culture emphasis, but they escalate in difficulty, ensuring the top prize can only be attained by a select few. You know, like our capitalist system.

“Paid Off’ operates on a different engine, one that more closely resembles the game-show altruism peddled on shows like “The Wall” in spirit, mixed with the go-lucky lightness of more classical styled game shows like “Snoop Dogg Presents The Joker’s Wild,” a sleeper hit airing on TruTV’s Turner sibling TBS.

Brightly lit neon-colored graphics and peppy monotone synth riffs keep “Paid Off” competitors in a upbeat mood despite their knee-buckling financial situations. Each podium is topped by the obligatory answer button that the contestants press to field general knowledge questions. Subjects vary, but very little of the trivia is tougher than high school level.

The benevolent deception of “Paid Off” is in the way Torpey gently but indubitably delivers a canny indictment on economic inequality without assigning blame to any specific political party. After the main competition, Torpey gets the audience involved with a segment called “Paid Off Office Hours,” designed to deliver more information about the student debt crisis as well as affording the opportunity to give another competitor a bit more debt relief.

During this segment we’re treated to the “Super Depressing Fact of the Week,” where the lucky person selected to play for additional cash reads information about woes such as predatory student loan practices, corrupt banking practices and economic bubbles.

Then they get to compete for a chance to make fast cash by, for instance, shattering objects with mystery prizes inside. But only after correctly answering a series of challenging questions, such as, “Banks are required to report deposits of more than $10,000 the federal government. What color is a $5 bill?”

Torpey’s “keep ‘em laughing to keep ‘em from crying” approach is important here, but even more vital to the success of “Paid Off” is Torpey’s relative normalcy. “Paid Off” could have leaned into a darkly satirical nihilism, appropriate to the alarming unsustainability of the problem it is simultaneously skewering and trying to fix one person at a time. TruTV could have pushed Torpey or some other actor of their choosing to adopt a jaunty, overly-excited tone, a la Caesar Flickerman of “The Hunger Games.”

Torpey’s even, friendly presentation of terrible truths, however, is one of the reasons “Paid Off” works. Another is the relative low-profile of TruTV. This is the kind of series meant to be stumbled across, in the spirit of a “Wonder Showzen” or other fringe cable series of yesteryear. And this enables “Paid Off” to get away with making infuriating, pointed statements about the lopsided power structure of our economy simply by the nature of the contestants Torpey chooses.

An upcoming episode is dedicated to teachers. Sweet as this is, Torpey's unspoken point in focusing on educators in this episode is to show how alarming their indebtedness is. He kicks off the fun by reminding viewers that the teachers they loved, or love, are probably sweating off a massive amount of debt.

As a point of comparison, in an episode prior to this, we meet Mat, who received his undergraduate degree in finance from University of Georgia, and a law degree from Ryan’s alma mater Georgia State. Mat is in the hole by $8,480. Torpey and the producers don’t call attention to his relatively petite balance, mind you. A viewer would have to pay attention to recognize these degrees of socioeconomic inequity.

And I couldn’t help thinking to myself that given the state of things, Mat, a future lawyer and financier, potentially stands to have a much easier time paying off his loans than Ryan, who tells Torpey that he’s just become a father for a second time. Ryan also jokes that he’d tell his students to answer phone calls from debt collectors with "no hablo inglés."

It gets laughs. “Paid Off” definitely fulfills its obligation on that front. Better still, Torpey excels at staying on task,  constantly reminding us of the point of this entertainment gambit.

“There’s 1.5 trillion dollars out there, and 45 million Americans struggling to get it paid,” he says.

“We gotta find a better solution than this game show.”

The solution to your student loan debt

Salon talk to Beth Kobliner, author of "Get a Financial Life: Personal Finance in Your Twenties and Thirties"