A fifth right-wing justice means more than the fall of Roe v. Wade. It's reactionaries' chance to turn back time 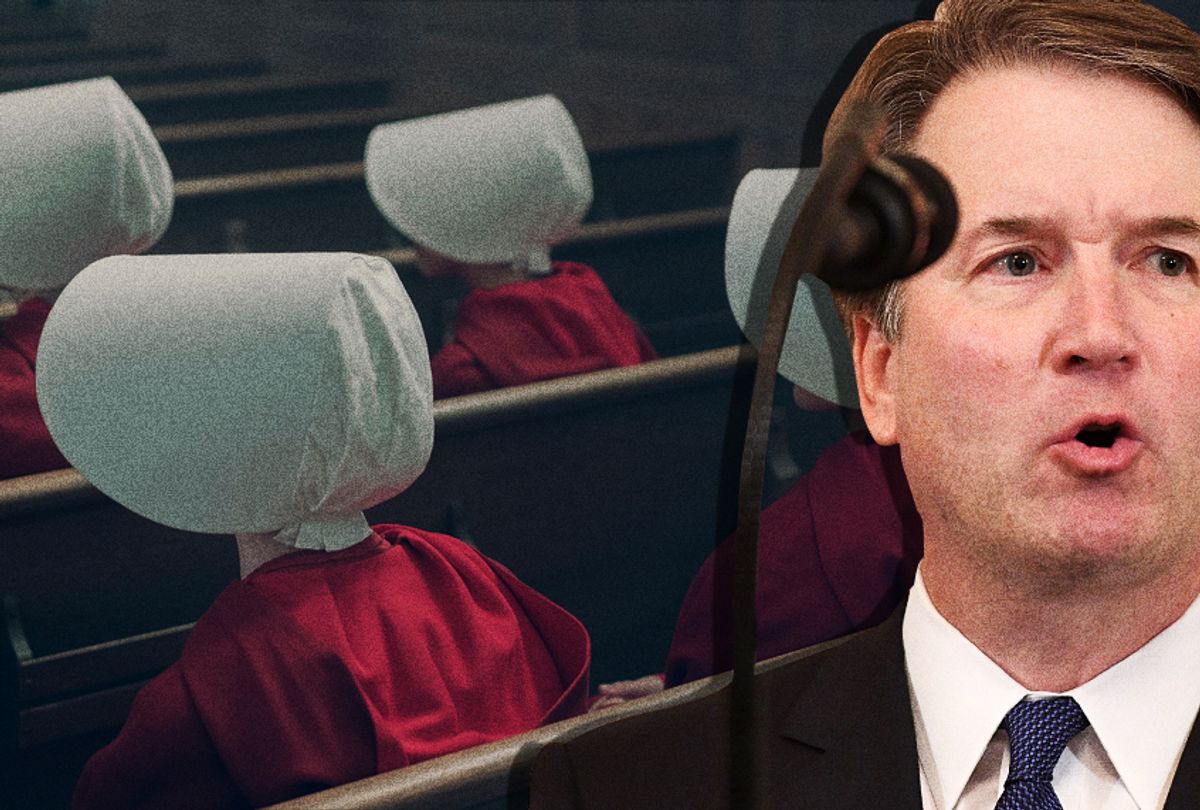 Last month's announcement of Justice Anthony Kennedy’s forthcoming retirement was a rude awakening for those who believe that progress is not only inevitable, but irreversible too. Now that President Trump has chosen his second nominee for the Supreme Court, who we learned Monday evening was we Brett Kavanaugh, a right-wing jurist with deep connections to Washington’s conservative legal establishment and Republican politics, it looks as if reactionaries will finally get their golden opportunity to remake America in their own image (i.e., to “make America great again” for wealthy white men).

Something that was inconceivable not long ago — the overturning of Roe v. Wade — now looks like a real possibility. While Kennedy has obviously been a conservative force on the Supreme Court, he has also been a critical swing vote on a few crucial issues, including abortion and gay rights. With Kennedy gone, reactionaries who hope to turn back the clock are now in a great position to do just that. ​​​​​​​Kavanaugh has demonstrated his anti-abortion bona fides, and along with the court’s four other conservative justices will likely be willing to gut or overturn the 1973 Roe decision, ending nationwide access to abortion and taking the country back 50 years.

Though many civil rights and freedoms — like women’s reproductive rights — have been under assault by the right for a long time now, many took for granted that certain issues, like the question of legal abortion, had been settled. While Republicans might attempt to restrict access to abortion — which they successfully did in numerous states — there was no question that women's freedom to choose abortion would continue to be protected under the U.S. Constitution, just like freedom of speech and the freedom to worship.

This is obviously no longer the case, and those who have studied enough history are aware that rights that have been gained over time can be easily taken away, and that there is no progress without reaction. American workers and labor unions found this out the hard way in the 1980s — and with the recent Janus v. AFSCME ruling, the right is continuing its successful crusade against labor in favor of employers.

The Republican Party has steadily shifted away from genuine conservatism over the past few decades, becoming a reactionary party where far-right zealots feel right at home. The rise of Trump represented the triumph of reactionaries over the party’s few remaining moderates.

In his book “The Reactionary Mind,” which made the case years ago that what we call conservatism in America is a thoroughly reactionary movement, political theorist Corey Robin summarized the historical conflict between the left and the right:

Since the modern era began, men and women in subordinate positions have marched against their superiors in the state, church, workplace, and other hierarchical institutions [including marriage].… In virtually every instance, their superiors have resisted them, violently and nonviolently, legally and illegally, overtly and covertly.

Robin defines conservatism as “a meditation on — and theoretical rendition of — the felt experience of having power, seeing it threatened, and trying to win it back.” Though not everyone agrees with Robin’s decision to use the words "conservative" and "reactionary" interchangeably, it is hard to deny his historically-grounded thesis. Right-wing politics can be enormously complex and contradictory, and reactionaries come from all walks of life. But the common theme among them is their desire to preserve (or restore) hierarchy and privilege (which represent order), along with their rejection of the modern world.

In their rejection of modernity, reactionaries long for a golden age. As political theorist Mark Lilla puts it in his book “The Shipwrecked Mind”: “Where others see the river of time flowing as it always has, the reactionary sees the debris of paradise drifting past his eyes.”

Reactionaries can be neo-pagan mystics like the Italian writer Julius Evola (who is popular with neo-fascist movements in Europe), Islamic fundamentalists like Abū Bakr al-Baghdadi or ultra-nationalist militants like Yukio Mishima, the prolific novelist who wanted to restore the “samurai spirit” in postwar Japan. All reactionary thinkers have their own particular golden age, and all identify a period in time when “the fall” began.

Reactionaries explicitly or implicitly reject what liberals, leftists and even modern conservatives call progress. They see progress as more of a terminal decline, and many believe in the reversibility of history. The Russian reactionary theorist Alexander Dugin, for example, is unequivocal about his belief in the possibility of turning back time.

“In the context of modernity, turning back from some point in history to a previous one is impossible. But it is possible in the context of the Fourth Political Theory,” Dugin writes in his book “The Fourth Political Theory.” It is quite possible, he continues, “that Russia could yet see feudalism, or even a slave-owning society, or perhaps a Communist or primordial society emerge after that. Those who laugh at this are captives of the modern and its hypnosis.”

Republicans, it seems, are no longer captive of the modern and its hypnosis. In today’s GOP, the decade that is usually seen as the beginning of our decline is the 1960s, as President Trump’s erstwhile adviser and ideologue, Steve Bannon, lays out in his documentary, “Generation Zero,” which attributes all of our current ills to the decade of civil rights, rock 'n’ roll and counterculture. According to this thesis, the '60s was a decade of moral decline and decadence, and this degeneration has continued unabated since then. Abortion and gay rights are just two issues that, for Republican reactionaries, symbolize the decline of American — and, more specifically, Western — civilization.

While reactionary thinking has obviously come to dominate the “conservative” movement in America over the past several decades, a kind of faith in the irreversibility of progress has come to be widely accepted among liberals and centrists. In the 1990s, neoliberals and neocons both bought into the “end of history” narrative after the collapse of communism, and in the Obama era Democrats came to believe, in their complacent coastal bubbles, that their party would inevitably control the future (as the saying went, “demographics is destiny”), and therefore progress was inevitable.

Those on the left were never so naive — perhaps because they have become so accustomed to losing over the years. While neoliberals looked around and saw only progress, those on the left clearly saw how successful the right (often with the assistance of the center-left) had been over the past forty years in dismantling the welfare state and crushing the power of workers. Many of labor’s achievements during the 20th century have been lost over the past several decades, and with union membership now at a record low, wages stagnating for the majority, and inequality at historic levels, the future is looking bleak for the proletariat.

Now, of course, the GOP is coming for other rights and freedoms that have been gained over the years, whether it’s women’s reproductive rights or marriage equality. Finally it is becoming clear to liberals and centrists, as it has been to those on the left for a long time, that progress can quickly be reversed. The struggle it took past generations to achieve what we now take for granted is easily forgotten, and without similar struggles today, it is not a question of if, but when the far-right will succeed in imposing their illiberal, anti-democratic and anti-egalitarian agenda.

After Justice Kennedy announced his retirement, many declared on social media that the popular TV show and novel The Handmaid’s Tale was quickly becoming our reality. While this is obviously an exaggeration, there are certainly “Gilead-like symptoms going on” in America, as author Margaret Atwood has said recently. The point in these comparisons is not to say that we are on our way to becoming a theocratic state, but that we are going through a period of reaction that could have some pretty serious consequences for the future.

As reactionaries continue to acquire more power, the population is actually becoming more socially liberal and progressive. On a majority of social issues public opinion has become increasingly liberal over the years. 91 percent now say that birth control is morally acceptable, for instance, while 63 percent approve of gay or lesbian relations. Public opinion is evenly divided on abortion, with 48 percent identifying as pro-choice and 48 percent as pro-life, but 8 in 10 Americans believe that abortion should be legal in all or some circumstances. On economic issues the populace is similarly left-leaning, with polls indicating majority support for policies like universal health care and wealth redistribution.

The reactionary agenda currently being pursued by Republicans, then, is rejected by the majority of Americans, and will be implemented despite public opinion, not because of it. This is a consequence of the decline of our democratic institutions. Along with labor unions and the middle class, our democracy has been hollowed out over the past fifty years, and now a president that didn’t win the popular vote and a party that secured its majority through anti-democratic means like gerrymandering and voter suppression will be reshaping the country.

Only apathy will help reactionaries accomplish their goals. If the right does succeed in turning back the clock and reversing the achievements that have been made by workers, women, people of color, and LGBTQ people over the past century, it will be because of a populace that had forgotten the popular struggle that it took to get to this point — and the struggle that is required to preserve this progress.

A party built on hate

Salon's Amanda Marcotte on how the American conservative movement degenerated into "Troll Nation."