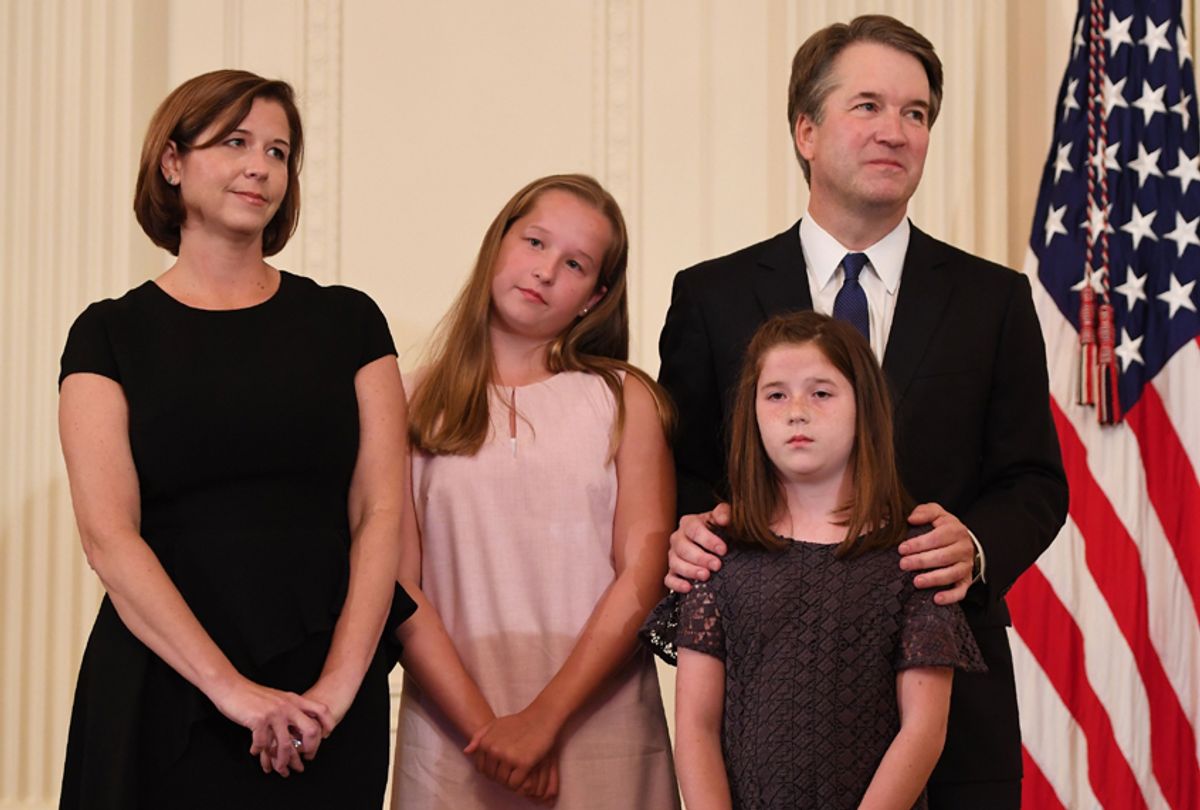 Brett Kavanaugh stands with his family as Donald Trump announces him as his nominee to the Supreme Court in the East Room of the White House, July 9, 2018. (Getty/Saul Loeb)
--

After the first full day of coverage of Brett Kavanaugh, Donald Trump's nominee to replace Justice Anthony Kennedy on the Supreme Court, it's become clear how the White House plans to sell this pick to the public and the Senate: By falsely portraying Kavanaugh as a Kennedy-style moderate on social issues. Specifically, the White House and its propaganda machine are trying to convince people that Kavanaugh won't be the fifth vote to end abortion rights in America.

Unfortunately, this narrative, which is almost certainly untrue, is already taking hold in some corners of the media and is likely to spread further. If Trump is successful, he may even lull some of this year's more vulnerable Democratic senators into voting for the man who -- as Trump repeatedly promised on the campaign trail -- is nearly certain to bring an end to Roe v. Wade.

The efforts to spin Kavanaugh as a friend to women kicked off during his speech accepting Trump's nomination, in which Kavanaugh emphasized that he accepts that women, at least the ones he knows, can have value outside of their capacity for reproduction. He called his mother a "trailblazer," talked up how his daughters play sports, noted that his wife worked in the White House under George W. Bush and said he is "proud that a majority of my law clerks have been women." He all but wore a tie printed with "#NotAllMen."

Then came a strange series of "leaks" to the press that just happened to portray Kavanaugh as a Kennedy-style middle-path jurist. NBC reporter Leigh Ann Caldwell tweeted that an anonymous source inside the White House had told her Kennedy only retired after getting assurances that Kavanaugh would be picked to replace him. Politico similarly reported that White House sources have said Kennedy left "the impression with Trump that Kavanaugh would be a great candidate for the job." White House Deputy Press Secretary Raj Shah went on CNN to wink some more at the idea that Kennedy had influenced Trump's choice.

Whatever the truth about what happened between Trump and Kennedy, it's clear that the White House is eager to push this narrative that Kennedy picked Kavanaugh as his successor, which therefore means Kavanaugh is not a threat to abortion rights.

White House sources have also been anonymously telling reporters that "pro-lifers aren't thrilled" by Kavanaugh's selection. It's exactly the sort of thing that liberals are dying to hear and that pro-choice Republican senators like Lisa Murkowski of Alaska and Susan Collins of Maine can cling to when justifying their vote to confirm Kavanaugh to the high court. It doesn't comport with reality, however, where anti-choice organizations are telling their followers that Kavanaugh is an "outstanding choice" who is "likely to be the beginning of the end for Roe v. Wade."

Fox News also set to work portraying Kavanaugh as a moderate. Pundits papered over his conservative record and Byron York said, "I think you will hear a lot about Brett Kavanaugh's respect for women." On the flip side, Fox's Andrew Napolitano expressed disappointment, grousing (or faux-grousing) that Kavanaugh is a "Washington establishment" choice. Either way, the message sent by Fox News was the same: Kavanaugh is a moderate on women's rights. Polls show that about half of Republican voters don't want Roe v. Wade overturned, which goes a long way towards explaining why the GOP's house network is downplaying the likelihood that that's exactly what Kavanaugh was hired to do.

There appears to be a two-pronged strategy from Trump and his surrogates in the media: Portray Kavanaugh as moderate on reproductive rights in mainstream spaces while quietly reassuring anti-choice activists that he's their guy. Of those two narratives, the evidence points toward the latter: No matter how many girls' sports teams Kavanaugh coaches, he doesn't necessarily believe those girls should have the right to make their own reproductive choices when they grow up.

Fatima Goss Graves, head of the National Women's Law Center, reminded reporters on a press call Monday night that two of Kavanaugh's most recent opinions for the D.C. circuit court expressed a belief that a woman's boss should be able to veto her birth control coverage and that the Trump administration should be able to hold a teenage immigrant prisoner to prevent her from terminating a pregnancy that was quite likely caused by rape.

“It’s no small matter," Graves suggested, that it was after Kavanaugh had endorsed the administration's forced-childbirth-by-imprisonment scheme "that his name first appeared on President Trump’s list of potential Supreme Court nominees."

Last September, as Ian Millhiser of ThinkProgress explains, Kavanaugh gave a speech to the American Enterprise Institute in which he denounced Roe v. Wade as a "free-wheeling judicial creation of unenumerated rights that were not rooted in the nation’s history and tradition."

In the same speech, Kavanaugh also criticized the "strict wall of separation between church and state" as "wrong as a matter of law and history."

It is critical to note that this conservative criticism of Roe — that the right to privacy is somehow a "judicial creation" not justified by the Constitution — also covers the Supreme Court decisions that legalized contraception and homosexual sex. All those decisions are rooted in a reading of the Constitution that Kavanaugh evidently views as illegitimate.

“We already know how dangerous and consequential one of Trump’s previous members of the short list has been," Vanita Gupta of the Leadership Conference on Civil and Human Rights said in Monday's press call, noting that Justice Neil Gorsuch has "showed that he’s willing to discard established precedent," despite portraying himself as a reasonable and prudent jurist during his confirmation hearing.

In a article published Tuesday by Reuters, Lemieux expanded on this idea, arguing that a Kavanaugh majority could also "allow states to effectively ban abortion without explicitly overruling Roe."

Millhiser concurred with this view, writing, "All Kavanaugh needs to do is hold that Texas can require every abortion clinic to feature a solid gold operating room, or require every abortion doctor to complete a 100,000 hour training course taught by Mike Pence." Boom: Abortion is made impossible to provide legally, without being officially banned.

Unfortunately, the White House push to frame Kavanaugh as a moderate, at least on women's rights, is already gaining traction in more mainstream media spaces. Joe Scarborough argued on his MSNBC morning show Tuesday that Kavanaugh is "such a mainstream pick" and that it will be "hard to paint him as a wild-eyed ideologue."

It is worth observing here that while MSNBC is widely perceived as a "liberal" network, Scarborough used to be a Republican congressman and once gave free legal representation to the man who murdered abortion doctor David Gunn in Pensacola, Florida, in 1993. Scarborough has tried to downplay his involvement in later media discussion, but Gunn's killer, Michael Griffin, offered evidence that Scarborough tried mightily to stay on the defense team, even after more qualified attorneys were secured. Scarborough later received more than $15,000 in campaign donations from the National Right to Life Committee.

Whether journalists who don't have a history of anti-choice activism will fall for the administration's efforts to spin Kavanaugh as a moderate on reproductive rights remains to be seen. What is clear, however, is that polls consistently show that broad majorities of Americans support Roe v. Wade and that abortion rights are far more popular than President Trump. Republicans, however, don't much care. They are deeply dependent on the financial and activist support of the Christian right and in their ideal world would find a way to ban abortion, at least in practice, without the larger public ever quite noticing. This campaign to pass off Brett Kavanaugh, who clearly holds anti-choice views, as an abortion moderate is part of that larger strategy.