The news about Schnatter, who donated to Donald Trump's campaign, wiped out $96 million in the chain's market value 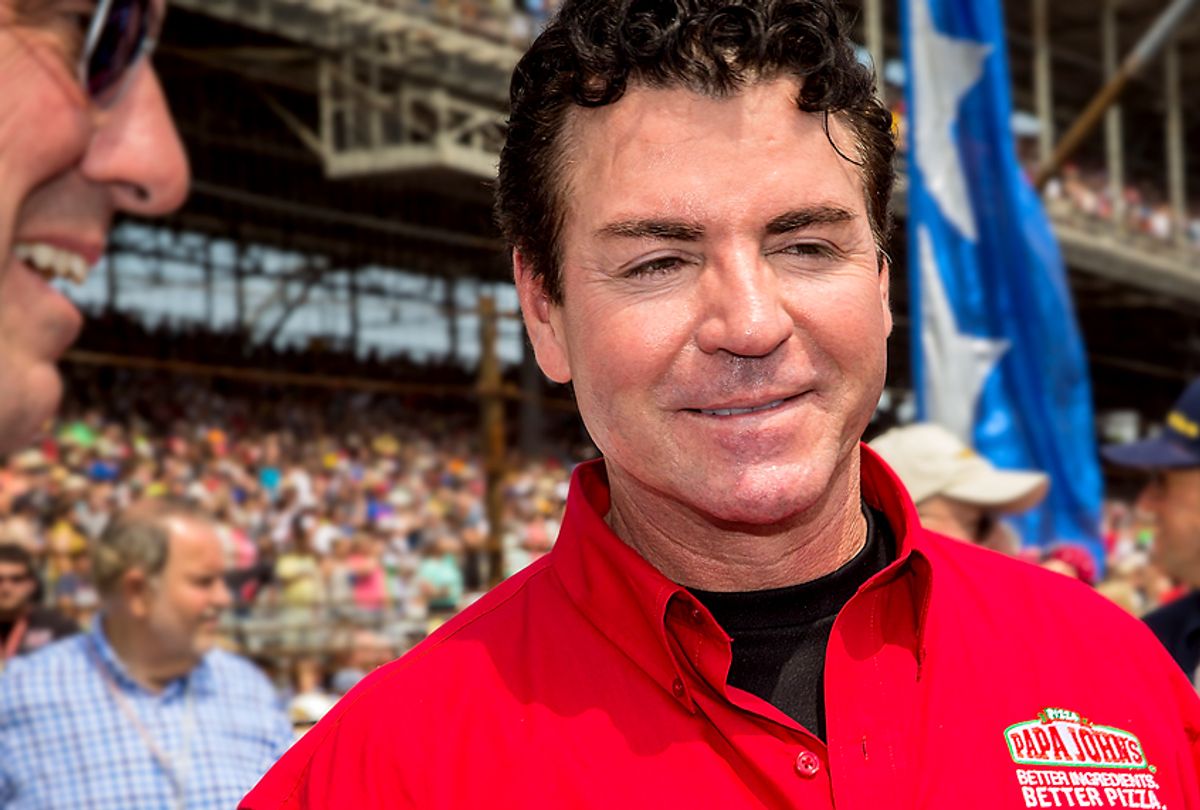 UPDATE: John Schnatter — the founder of the Papa John’s pizza chain who donated to Donald Trump's presidential campaign —resigned Wednesday night after it was revealed that he hurled the N-word on a conference with executives and the marketing agency Laundry Service in May.

The incident, which was first revealed by Forbes, originally cited an unnamed source. However, since the report was published, Schnatter admitted to using the racial slur in a statement emailed to the news outlet.

Here is how the conference call unfolded, according to the Forbes' Noah Kirsch:

The call was arranged between Papa John’s executives and marketing agency Laundry Service. It was designed as a role-playing exercise for Schnatter in an effort to prevent future public-relations snafus. Schnatter caused an uproar in November 2017 when he waded into the debate over national anthem protests in the NFL and partly blamed the league for slowing sales at Papa John’s.

On the May call, Schnatter was asked how he would distance himself from racist groups online. He responded by downplaying the significance of his NFL statement. “Colonel Sanders called blacks n-----s,” Schnatter said, before complaining that Sanders never faced public backlash.

Schnatter also reflected on his early life in Indiana, where, he said, people used to drag African-Americans from trucks until they died. He apparently intended for the remarks to convey his antipathy to racism, but multiple individuals on the call found them to be offensive, a source familiar with the matter said. After learning about the incident, Laundry Service owner Casey Wasserman moved to terminate the company’s contract with Papa John’s.

Schnatter apologized in his statement, which offered his assertion that racism has no place in America.

"News reports attributing the use of inappropriate and hurtful language to me during a media training session regarding race are true," he said. "Regardless of the context, I apologize. Simply stated, racism has no place in our society."

Since the report surfaced, Bloomberg reported that shares of Papa John's tumbled "as much as 5.9 percent on Wednesday to $47.80 as of 11:05 a.m., the lowest intraday level since February 2016." According to the New York Daily News, that erased "roughly $96 million in market value."

Wednesday's news arrives nearly seven months since Schnatter stepped down as CEO of Papa John's after infamously blaming the NFL's handling of players kneeling during the national anthem for the pizza company's falling sales. Schnatter founded Papa John's in 1984.

"Leadership starts at the top, and this is an example of poor leadership," he said. "The NFL has hurt Papa John's shareholders."

Subsequently, the pizza company yanked its advertising associated with the league.

Eventually, Papa John’s, which was the NFL's official pizza since 2010, was replaced by Pizza Hut.

"The NFL and Papa John's have made a mutual decision to shift from their official league sponsorship to a focus on partnerships with 22 local NFL teams, presence in broadcast and digital media and key personalities in the sport," the league and the company said in a joint statement.

As part of Pizza Hut's four year deal, which was reportedly higher in value, the brand is featured at league-wide events like the NFL Draft and the upcoming Super Bowl.

During his time in the Oval Office, President Donald Trump has used his platform to spark a culture war about NFL players who choose to protest racial injustice by kneeling during the playing of the national anthem, recently even threatening to deport those who defy him.

In contrast, the president doubled-down on his comments that there were "fine people" who attended the deadly white nationalist rally in Charlottesville, Virginia. "I think there's blame on both sides . . . You also had people that were very fine people on both sides," Trump said last August.

However, the president has not discussed deporting those involved in the violence in Charlottesville. At the time, Salon's Chauncey DeVega wrote:

This week, Donald Trump has once again signaled his ominous dedication to protecting and strengthening a backward-looking conception of American life and society, in which nonwhites are treated as second-class citizens.

According to Bloomberg, Schnatter "donated to Trump’s campaign and has railed against government regulations." Business Insider reported that figure was $1,000. The same report also unearthed related comments from Schnatter's past:

In his 2017 book "Papa: The Story of Papa John's Pizza," Schnatter argued that regulations are steering the U.S. away from the system of free enterprise he believes is crucial to the nation's success.

D. Watkins gives tips on what he would add to Starbucks’ anti-racist curriculum.