Trump is as wrong on the border as Bush was on Iraq, and it will end just as badly for America

Lies and incompetence were no way to run a war, and they won’t work for Trump either 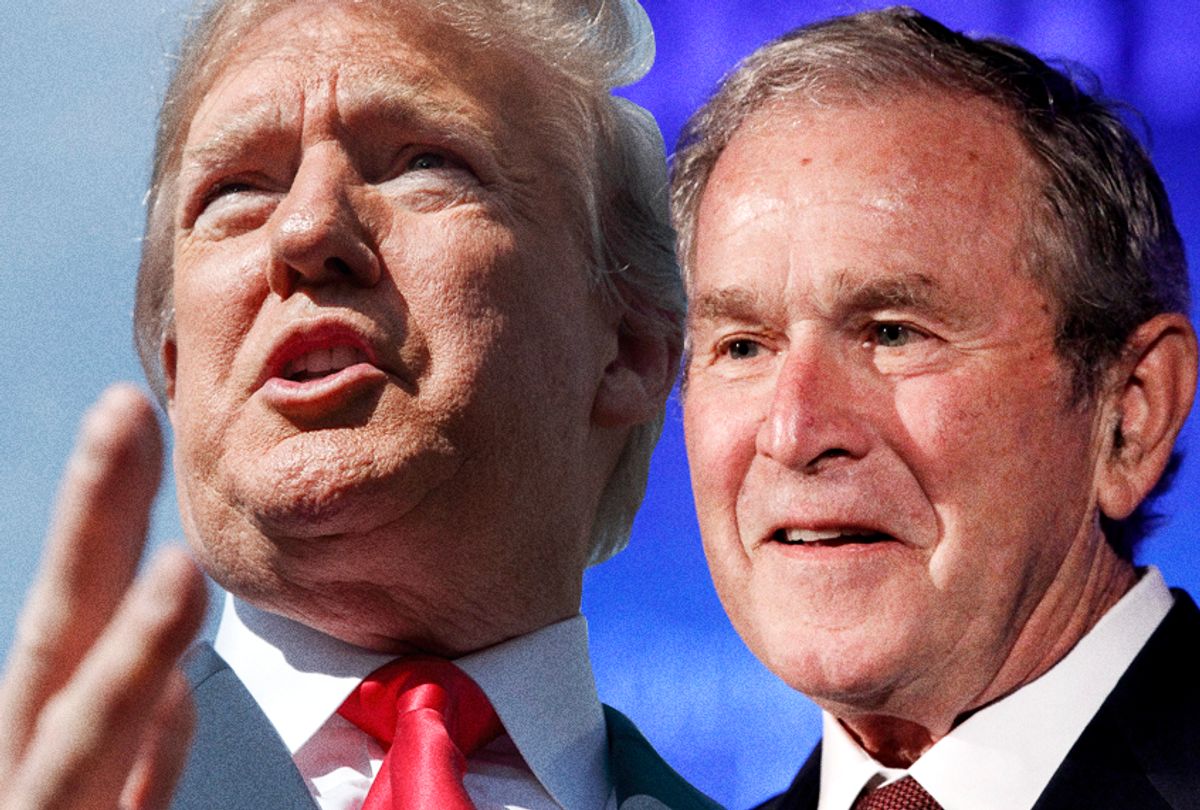 Remember all those weapons of mass destruction that were sitting there in Iraq just waiting for us to find them as soon as we defeated Saddam Hussein? President George W. Bush, Vice President Dick Cheney and Secretary of Defense Donald Rumsfeld recited that abject lie so many times our ears were bleeding by the time American forces crossed the border with Kuwait and took Baghdad.

Then they looked and looked and looked, and what do you know, but there weren’t any WMD! Not a single chemical warhead. Not even one bio-weapon. And nukes? Saddam didn’t even have a high school physics lab level understanding about a nuclear program. No stockpiles of “yellowcake” uranium. The “aluminum tubes” cited about eleventy-zillion times by Rumsfeld and Condoleezza Rice were for common artillery rockets, not nuclear centrifuges. There were no uranium enrichment facilities. If you swept a Geiger counter over the whole country of Iraq, it would have registered Zero.

Trump’s lies about immigrants and Bush’s lies about WMDs are the same thing: justification for corrupt, disastrous policies that waste lives and dollars.

While Bush cited WMDs as the justification for invading Iraq, Trump has bellowed on and on about immigrants and crime to justify his draconian policies on the border, from “build that wall” to taking undocumented children away from their parents. To hear Trump and Attorney General Jeff Sessions tell it, undocumented immigrants are responsible for a massive increase in crime in this country.

The facts are about immigrants and crime are the Trump administration’s imaginary WMDs. According to the Pew Research Center’s reading of FBI statistics, both violent crime and crimes against property fell 48 per cent between 1993 and 2016.

The Bureau of Justice, which does an annual survey of families asking if they had been victims of crime over the last year, has statistics for the same period showing a drop of 74 percent in violent crimes and a 66 percent reduction in crimes against property.

According to the New York Times, as the population of immigrants has risen by 118 percent between 1980 and 2016, violent crime has fallen by 36 percent.

“The 10 places with the largest increases in immigrants all had lower levels of crime in 2016 than in 1980,” according to the Times, putting the lie to Trump’s claims that areas with large immigrant communities have higher crime rates. “According to data from the study, a large majority of the areas have many more immigrants today than they did in 1980 and fewer violent crimes.”

According to the Houston Chronicle, the conservative Cato Institute used data from the Texas Department of Public Safety in a study that found that undocumented immigrants in Texas are arrested at a rate 40 percent below that of Texas native-born citizens.

The same study found that found that “the arrest rate of all immigrants, documented or not, was 65 percent less than native-born Texans, or 1,243.7 per 100,000,” according to the Chronicle.

Trump and Sessions have continually harped on MS-13 to justify their harsh policies on the border, claiming that the brutal Central American street gang is smuggling members across the border in large numbers. Yet according to the national security focused website Lawfare, “since the Trump administration took office, the Border Patrol has detected fewer gang members crossing irregularly than during the Obama administration.”

The incompetence of both administrations is truly remarkable. Rumsfeld and his genius fellow “architects” of the Iraq war at the Pentagon, Douglas Feith and Paul Wolfowitz, made plans for the invasion of Iraq, but not what they would do once they seized control of the country.

Rumsfeld famously quipped “shit happens” when asked about the out-of-control looting that went on in Baghdad just days after the Iraq capital fell to American forces. Within weeks, the thinly-spread invasion force of about 140,000 was faced with an insurgency manned and armed by former Iraq army officers and soldiers who had been cut loose soon after after American viceroy Paul Bremer disbanded the Iraqi army.

The American army was so unprepared for the armed opposition they faced, we were still fighting the insurgency 8 years later when Obama declared “victory” and pulled out U.S. combat troops. In case you hadn’t noticed, we currently have about 5,000 troops deployed in Iraq, and 2,000 fighting in Syria.

The planning by Trump’s Department of Homeland Security for their disastrous policy of separating undocumented immigrants from their children over the last two months has been similarly out-of-control. “As many as 3,000 children remain separated from their parents, according to new estimates by HHS,” the L.A. Times reported this week.

The separations were a result of Attorney General Sessions’ so-called “zero tolerance” policy, announced in April. This policy ordered the arrest on Federal charges of virtually every undocumented immigrant picked up crossing the border. It was at this point, in the immortal words of Donald Rumsfeld, that shit began to happen.

That’s just it. Nobody knew what to do with the immigrant children, so they were put on busses and sent to makeshift jails in empty former Walmarts, tent “camps” near the border with Texas, and god-only-knows what kind of other facilities in Florida, Georgia, Virginia, New York, and Michigan, according to a recent report by CNN.

In New York, “at least 239 children are in the care of the Cayuga Centers in Harlem, which runs day programs for them. Some are in foster care, and others could be with relatives,” according to CNN. Notice the imprecision in accounting for the children in the CNN report, which was based on figures provided by the Federal Government. “Some” in foster care; “others” with relatives.

Trump suspended family separations late last month under pressure by Democrats and multiple demonstrations around the country. Now the Federal courts have stepped in and ordered the children to be reunited with their parents. The problem is that nobody seems to know where the parents of many of the children are, nor do they know the location of the children. The Trump administration went to court this week to request an extension of the order to reunify immigrant families, but the request was denied.

By the court-imposed deadline on Monday, only four of 102 immigrant children under the age of five had been reunited with their parents. “Why was it so easy for them to take our children, but so hard to give them back?” NBC News quoted Digna, a Salvadoran immigrant who was separated from her two children in May.

Why was it so hard? Because Trump’s glorious Border Patrol and Immigration and Customs Enforcement agents didn’t keep proper records. Trump and his xenophobic madman attorney general were so determined to get their dangerous immigrant criminals behind bars and sent back to wherever they came from, they didn’t bother to write down whose parents belonged to whose children.

After years of trying to keep track of the insurgency in Iraq, the Bush administration finally issued handheld retinal scanners to the American military which they began using to record the identities of Iraqis arrested as enemy combatants, as well as to identify members of the Iraqi army. The devices record the unique pattern of individuals’ irises and assign each one to a person’s identity. The portable scanners can record up to 10,000 separate, unique identities.

Trump’s Department of Homeland Security could have borrowed retinal scanners from the military, or — here’s an idea! — bought their own! They could have scanned the eyes of each child and parent arrested at the border, matched them to names provided by the parents, and today they would have an exact, computerized record of parents and children which could be used to track individual immigrants right down to infants unable to provide their own names. It would take a few keystrokes to computer-match the identities of parents and children with their physical locations, and a simple, freely available program like Google Maps could establish the most efficient way to get them back together.

This is what happens when conservatives who don’t believe in government take on the task of running one. They figure if they tell enough lies, and fool enough people, they can get away with anything. Bush did it when he invaded Iraq on the spurious charge that Saddam had weapons of mass destruction.

Trump appointed incompetent, corrupt cabinet secretaries like Jeff Sessions and Kirstjen Nielsen and didn’t require the federal departments in charge of controlling the border to write down mothers’ names and the numbers of the buses you put their children on. In each case, you end up with what we’ve got in Washington right now: an administration that relies on lies rather than facts and doesn’t value the lives of people whose skin is a color other than white, whose religion is other than Christian.

People have said separating families at the border is turning out to be Trump’s Katrina. Wrong. Immigration is Trump’s WMD’s, and his disastrous policy of taking immigrant children away from their parents is exposing the President of the United States as ignorant, incompetent, and cruel. Lying about immigrants might be keeping his base happy, but the rest of the world is watching, and they know the truth.