In today's politicized climate, the band's appeals to "unity" and "this is America" don't make a big impression 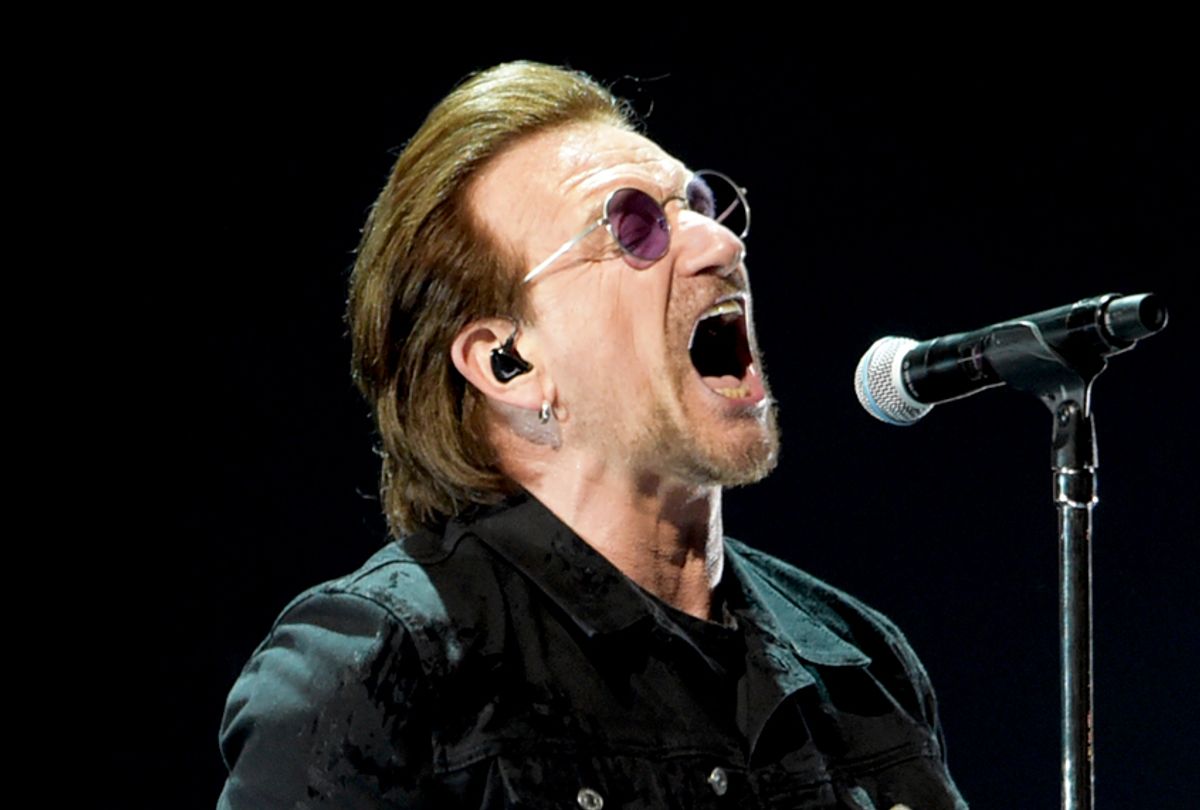 U2 have just completed the U.S. leg of their Experience + Innocence Tour, which was an ambitious, inspirational performance piece which also suffered from U2’s usual habit of trying to do too much with a rock and roll show. This tendency is both the best and worst thing about them, simultaneously: At this point in their career, they could walk out onstage and play any one of their greatest hits albums from start to finish and they’d still sell out stadiums all over the planet. The fact that they don’t, that they still try — and sometimes fail — to put together an performance piece under the guise of a rock and roll show is what makes them still relentlessly fascinating.

So this show, which was constructed as a sleek, immersive experience about death, mortality, rock and roll, righteousness, and equality, also had to somehow be able to navigate and speak to the Category Five Hurricane speed of the current political landscape. This ability to contextually reference the outside world within the scope of a rock and roll show is a U2 hallmark which stretches back decades to the white flags onstage during “Sunday Bloody Sunday” or the very existence of a song about Martin Luther King Jr. on "The Unforgettable Fire," through the band’s promotion of Amnesty International, right up to Mirrorball Man making phone calls to the White House onstage during the ZooTV tour. All of this was long before Bono was being invited to attend the World Economic Forum in Davos or creating an organization dedicated to eradicating poverty and fighting the spread of AIDS.

And while technology has caught up with the band — these days, they can create the visual impact that meets their needs without a drive-in movie screen and a giant mirrorball lemon — it still raises the question of how artists who have a connection and commitment to social justice are able to express that in the current political climate without it overshadowing the art.

In 1993, on the Zooropa tour, Bono created a now-legendary character named MacPhisto: a deliberately over-the-top portrayal of the Devil as an aging, louche lounge lizard wearing gold lame pants and a pair of red velvet devil horns. MacPhisto was the embodiment of the imp of the perverse, phoning world leaders, sports figures, and unfortunate taxi dispatchers. MacPhisto would return in 2018, dressed in the top hat and sequined tuxedo jacket of a ringmaster, leaning into a tablet loaded with augmented reality software that superimposes a devilish visage, horns included, up on the big screen for everyone to see.

Although the segment would vary from show to show, the themes were always ripped straight out of the headlines. Borrowing liberally from the Rolling Stones, MacPhisto would often recite a reworded version of “Sympathy for the Devil”:

"Please allow me to introduce myself. I'm a man... of wealth and taste. I been around for many a long year... stole many a man's soul... to waste. I was there in Charlottesville, with the Nazi flags!" [gives Nazi salute] "...and the KKK. It was I spray-painted the First Lady's coat – I told her it was all the rage.”

Other topics close to MacPhisto’s heart included Stormy Daniels, Putin, G7, trade wars, and the administration’s Zero Tolerance policy at the borders (“Putting children in cages — very Hansel and Gretel, don't you think?"). In Washington, DC, he would read the room, and add, “I especially love . . . people using the Bible to justify anything they want . . . and whatever happens...don’t mention the . . . C-word: Comp-ro-mise! Oh, excuse my French.”

But they all ended with the warning: “It’s when you don’t believe I exist — that’s when I do my best work.” The vignettes worked best when they went to ugly extremes, because the entire point of the character is putting a face to what’s dark and nasty.

The monologue always came right after “Desire” (which was MacPhisto’s old neighborhood back in 1993) and before “Acrobat,” the dark, cynical "Achtung Baby" track about loss, betrayal and disappointment: “Don’t believe what you hear / Don’t believe what you see / If you just close your eyes / you can feel the enemy.” The venom behind the the vocals and the rest of the instrumentation — some nights Bono’s voice was the broken glass, some nights it was the Edge’s guitar solo, and other times it was the rhythm section of Larry Mullen Jr. and Adam Clayton creating a depth to the song that was like a rock sinking to the bottom of a riverbed — was profound and moving.

But MacPhisto’s appearance was hardly the sharpest political commentary in the show. That would materialize a few songs later during Bono and Edge’s b-stage acoustic duet on “Staring At The Sun” from 1997’s Pop. Bono introduced the track with a rambling prelude that regretfully lost most of the audience’s attention, telling a story about the band decamping to the south of France and taking a moment to enjoy their success while at the same time, serious work was being done to advance the cause of peace in Ireland, resulting in the Good Friday Agreement in 1998.

But while “Staring At The Sun” undoubtedly has these elements in its lyrics, the words actually  convey a much starker picture than four rich men drinking rosé on the beach in Eze-sur-Mer. It’s about paralysis and a willingness to ignore what’s going on around you. It would be easy to not hear any of that, and most people attending the show probably don’t — at the band’s recent shows in New York City, “Staring At The Sun” was the “get up and go get beer” moment of the show.

So when the graphics on the video screen shifts into images of white supremacists marching in Charlottesville and elsewhere, tiki torches, white hoods, and Nazi salutes, it’s disturbing and discomforting — which it should be — but the point being made is so subtle as to be completely lost. Bono picking up his star spangled megaphone to begin declaring “This . . . is not . . . America / Where . . . is . . . America? / Are . . . you . . . America?” and then finally, once the images of white supremacy leave the screen and are replaced by The Rev. Dr. Martin Luther King Jr., Bono ends his recitation with an emphatic “This! Is! America!” and the band continues with “Pride (In The Name of Love).”

It is both disturbing and uplifting — the sense of discomfort in the audience as the neo-Nazis are projected is real and tangible, and while the appearance of Dr. King’s image releases some of that, the juxtaposition is unsettling. To some, the March on Selma might be something studied in American History, something that happened to someone else, while Charlottesville was seemingly yesterday; the hatred and prejudice is happening right now, not 50 years ago.  But the problem is that this is, exactly, America right now, and insisting that it’s not — especially in this particular context — is inaccurate and ham-fisted at best.

By the time the evening would draw to a close, and the lights would go out for the start of “One,” Bono would give his customary shoutout to the ONE Campaign and its current message that “Poverty is sexist,” and a personal story about how the daughters of the band members would remind them that we need everyone’s brains, not just 50 percent of the brains, to solve the world’s problems.

This then led into Bono’s now-expected plea for cooperation: “Things happen when people who don’t normally work with each other come together and stick together, then things really start to happen — men and women, the left and the right, for some ideas we need both sides of the aisle, is that not true, we need the left and the right in a conversation.” It makes sense that this is Bono’s mindset, as that is how he managed to be effective politically: “. . . In 2001 if you had told anyone on Capitol Hill that a Republican Administration would get behind delivering anti-retro-viral drugs to people with AIDS in Africa, they would have laughed in your face. And they did laugh in my face,” he told Neil McCormick. However, the results were anything but laughable: President Bush committed to 15 billion dollars over five years to fight AIDS overseas.

All of this might have held true in a different era, but with every day of the current administration playing fast and loose with democracy, these aspirational exhortations start to feel hollow. This is the same band that stood onstage at a Chilean football stadium in 1998 with the Mothers of the Disappeared, on a national TV broadcast, and directly confronted the Chilean government’s inaction. In "U2 by U2," Bono tells the story about how half the audience booed and hissed, and he was glad: “I was flattered that we weren’t just playing to people who agreed with us.” U2 are still not just playing to people who agree with them, but "there is no them, there is only us" is too easy a statement to look right through (or read your email on your phone) if you on the other side of that.

In June, Bruce Springsteen (who would grab a ticket to the band’s last night at Madison Square Garden) came onstage on Broadway and made a very direct statement about the actions of the current administration, noting, “I never believed that people come to my shows, or rock shows to be told anything,” but that this night called for something different. Last year, Patterson Hood of the Drive-By Truckers told a Boston magazine, “I look, demographically, like I should be a Trump supporter. I’m middle-aged, white, college dropout, Alabama. There needs to be somebody who looks like that saying ‘Black lives matter.’ ”

Those are examples of unequivocal statements offered by artists who decidedly have fans from both sides of the aisles in their fanbase. They’re not yelling “Refu-JESUS” through a megaphone at the end of “American Soul,” or a mid-song mutter about “suffer the little children to come unto me” or a glib thank you for letting the Irish come to America worked into the show somewhere as a way to try to humanize immigration. But to quote Archbishop Tutu (who Bono has quoted during many a U2 show),  “If you are neutral in situations of injustice, you have chosen the side of the oppressor. If an elephant has its foot on the tail of a mouse and you say that you are neutral, the mouse will not appreciate your neutrality.” Very few artists have the financial security and the type of global platform U2 possess that would allow them to make the same type of loud and unequivocal statement. Bono is right that now is the time that we need everyone to show up and make some noise; this is not the moment for anyone to be sitting on the sidelines.