"What good is NATO?": Trump attacks NATO allies on first day of summit 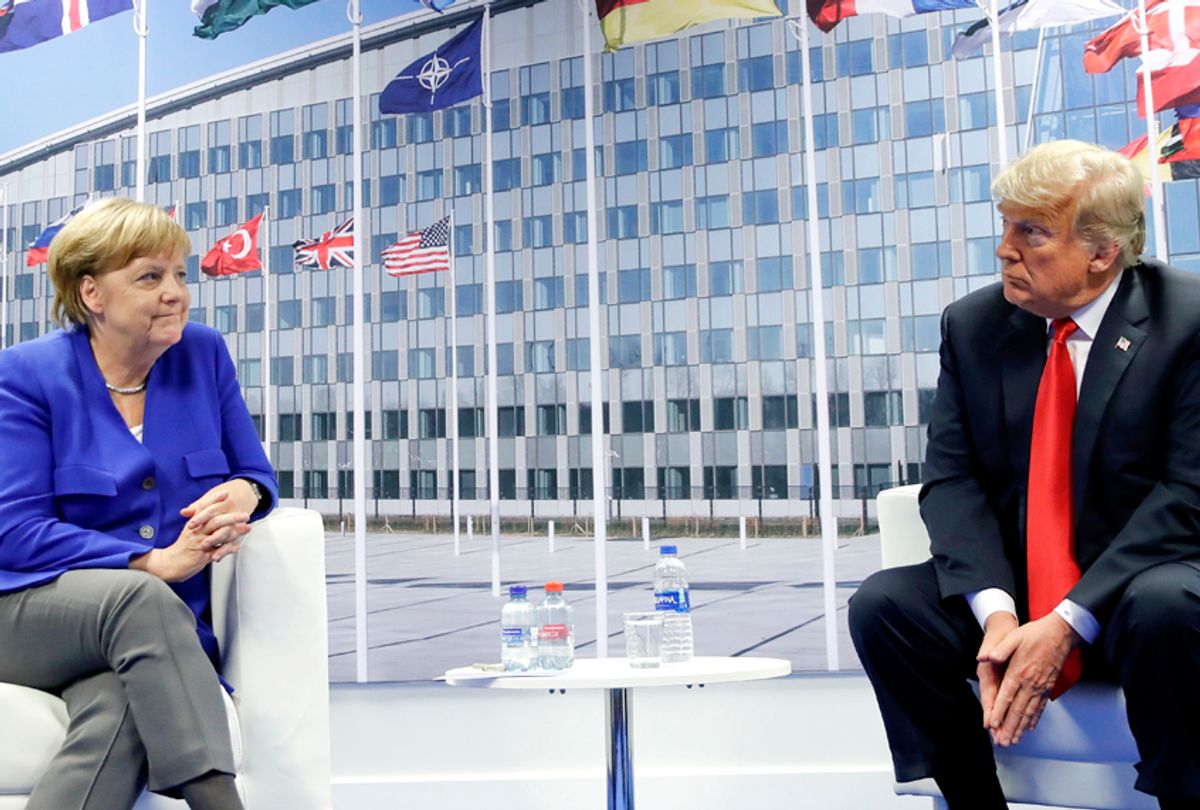 President Donald Trump insulted Germany, and thus widened the rift between the United States and its NATO allies, on the first day of his trip to Europe.

During a breakfast at NATO headquarters Brussels on Wednesday,  singled out Germany to accuse the U.S. ally of being "totally controlled by Russia" because of an over decade old energy supply agreement between the two countries, according to NPR. He added, "I think it's very unfair to our country. It's very unfair to our taxpayer."

Trump later took to Twitter to reinforce his position on this issue.

"I have experienced myself how a part of Germany was controlled by the Soviet Union. I am very happy that today we are united in freedom, the Federal Republic of Germany. Because of that we can say that we can make our independent policies and make independent decisions. That is very good, especially for people in eastern Germany," Merkel said, according to The Guardian.

Despite attacking NATO members for not spending enough money to support the organization, as The Washington Post points out, "Not even the United States — which spends more money on defense than any other nation in the world — meets Trump’s new goal of annual spending of 4 percent of nations’ gross domestic product":

Although Trump joined fellow NATO leaders in approving a sweeping set of plans to bolster defenses against Russia and terrorism, the U.S. president has complained that Europe has been taking advantage of U.S. military support for the continent, and he urged his counterparts in a private session to substantially raise a defense spending goal on which many are already falling short.

White House spokeswoman Sarah Huckabee Sanders defended Trump's actions in a statement where she claimed, "During the president’s remarks today at the NATO summit he suggested that countries not only meet their commitment of 2 percent of their GDP on defense spending, but that they increase it to 4 percent. The president raised this same issue when he was at NATO last year."

Sanders added, "President Trump wants to see our allies share more of the burden and at a very minimum meet their already stated obligations."

The foreign policy implications of Trump's broadside against NATO cannot be understated.

"America has always been a leader within NATO – and that has always been to our benefit," Laura Rosenberger, director of the Alliance for Securing Democracy and a senior fellow at The German Marshall Fund of the United States, told Salon by email. "Trump’s actions to create a crisis in the alliance – when no such crisis exists – risks isolating the United States and creating fractures for our adversaries to exploit. That includes President Putin, who has long sought to weaken NATO as a goal of his foreign policy."

In a rare show of bipartisanship, both Democrats and Republicans in Congress made public statements expressing their solidarity with NATO just prior to the commencement of the discussions in Brussels.

On Tuesday the Senate voted by 97 to 2 to declare its support for NATO in a resolution. As Sen. Jack Reed, D-R.I., explained on the Senate floor that the nonbinding motion was necessary because of Trump's antagonistic behavior toward the historic alliance.

"No one should ever doubt the United States' resolve in meeting its commitments to the mutual defense of the NATO alliance. Unfortunately, this motion has become necessary because some of our closest allies have come to question the US commitment to collective self-defense. President Trump has at times called the alliance 'obsolete.' Our allies are starting to wonder whether they can rely on the United States to come to their defense in a crisis," Reed explained from the Senate floor.

That, of course, was on Tuesday. When word got out of how Trump had behaved in Brussels, the reaction among members of Congress from both parties was even harsher.

"President Trump's brazen insults and denigration of one of America's most steadfast allies, Germany, is an embarrassment. His behavior this morning is another profoundly disturbing signal that the president is more loyal to President Putin than to our NATO allies," Senate Minority Leader Chuck Schumer and House Minority Leader Nancy Pelosi said in a joint statement, according to NBC News.

Their thoughts were echoed by House Speaker Paul Ryan, who told reporters that while he wasn't comfortable with criticizing Trump directly, he didn't want there to be any doubt about his own views toward NATO. "I subscribe to the view that we should not be criticizing our president while he is overseas, but let me say a couple of things — NATO is indispensable, it's as important today as it ever has been," Ryan told reporters.

His views were echoed by two of his Republican colleagues. "I’m very concerned that we have a rough meeting with NATO and then some kind of conciliatory meeting with Putin and it works against our country's national interest," Sen. Orrin Hatch, R-Utah, said after hearing about the president's remarks. Sen. Bob Corker, R-Tenn., also said that "I don't agree with that, Germany doesn't agree with that, they are strong people. I think you can be too critical of our counterparts."

This isn't to say that some Republicans weren't willing to carry the president's water for him.

"I think it’s about time that somebody in the U.S. stood up to NATO. Also, the Europeans can be sort of arrogant at times, so it's good to knock them back," Rep. Peter King, R-N.Y., declared.

Trump's alienation of NATO comes only days before he is expected to meet with Russian President Vladimir Putin, whose odd relationship with Trump has been the source of intense controversy since before Trump's election in 2016. The president has numerous business ties to Russia, has an unusually large number of associates who have had to resign because of their ties to Russia, has repeatedly said positive things about Putin and Russia and — perhaps most importantly of all — was the primary beneficiary, knowingly or otherwise, of Russia's meddling in the 2016 presidential election.