What do you do when your president has so many suspicious ties to a hostile foreign power? 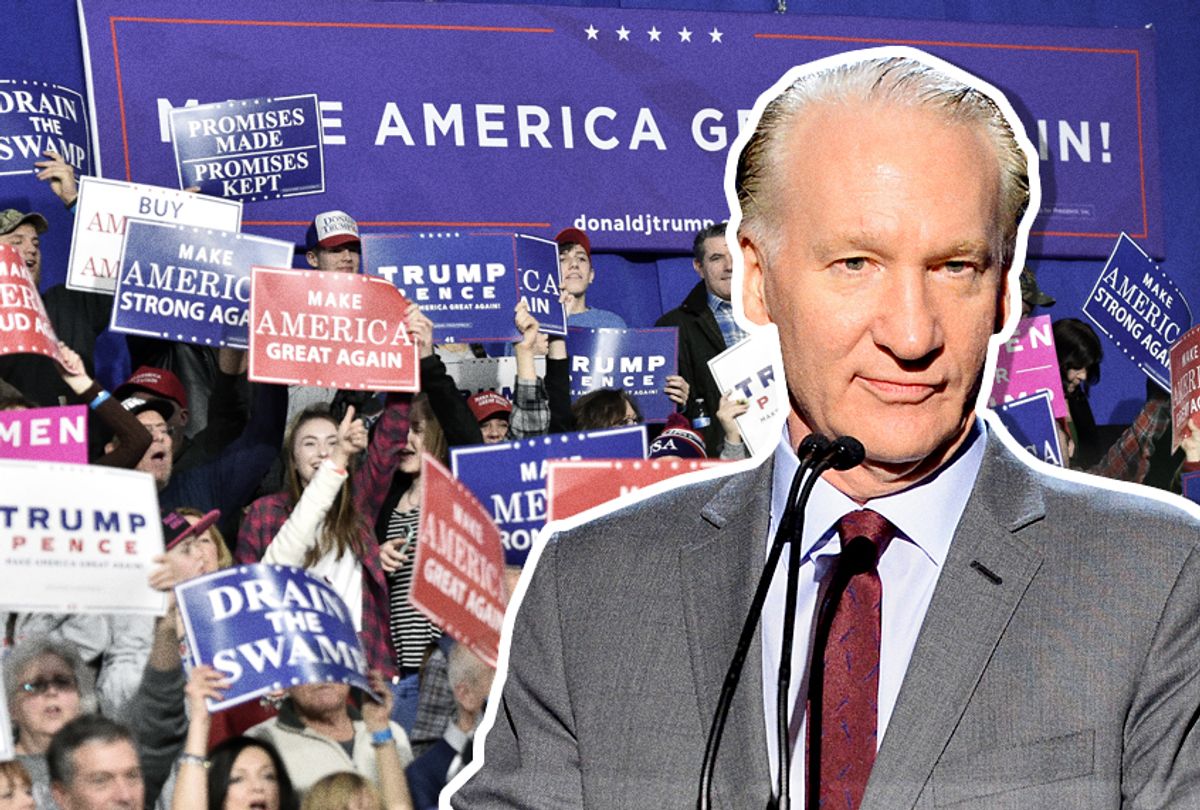 Back in March, talk show host Bill Maher had an observation for Amy Chua, author of the book "Political Tribes: Group Instinct and the Fate of Nations," that neatly sums up the central moral conundrum facing Trump supporters who believe themselves to be patriotic:

We're supposed to still be part of the American tribe. You know, they always said if Mars attacked, then we and Russia would get together. But as it is now, Mars hasn't attacked, so we're still supposed to be against Russia as Americans. It seems to have gotten a little out of whack here when the Republicans hate the Democrats, that tribe, so much that they're with the Russian tribe over the Democrats.

This is an observation with which everyone should agree, even those who have doubts about whether President Donald Trump actually colluded with the Russian government during and after the 2016 presidential election. It is one that, as millions of Americans honor the sacrifices made by our soldiers during Memorial Day weekend, we absolutely must keep at the top of our minds and close to our hearts.

Even if you aren't convinced that a smoking gun exists to prove Trump did anything illegal in his interactions with Russian government officials, it is indisputable that he has suspicious ties to that country — or, at least, it would be indisputable if we didn't live in an era where facts are so commonly warped by partisan biases.

While most of the culprits here are Republicans and other conservatives who fear that discrediting Trump would harm their cause and hand liberals a major moral victory, it should be noted that there are many on the left who have also gone out of their way to pooh-pooh the possibility of collusion or other forms of impropriety. This wing of the leftist movement seems mainly motivated by their seething distrust of and hatred for the military-industrial complex. That skepticism may be justified, but it also leads them to reflexively doubt any theories that they fear will provide the so-called "Deep State" with institutional validation, even if the facts support those conclusions. It doesn't help that a man still beloved by some leftists, WikiLeaks founder Julian Assange, would see his reputation left in tatters if it was proved that he was nothing more than an errand boy for one imperialist power over another (which he is).

Regardless of which section of the Trump über allies crowd you fall into, however, there are five inescapable facts about Trump's connections with Russia, as well as unavoidable conclusions that follow from those facts, if one's goal is to best serve the interests of the nation known as the United States of America.

1. Russia meddled in the 2016 presidential election with, among other goals, the desire to install Trump as America's next president. This is the unanimous conclusion of America's intelligence agencies, who are equally certain that Russia is targeting the 2018 midterm elections, and on a federal level, the notion that Russia wasn't trying to help Trump has only been promoted by a congressional committee whose chairman has made it clear that his goal is to protect the president.

2. Trump and his family have an unusually extensive history of business ties to Russian government officials and Russian business leaders closely connected to those government officials. These range from his work on the Miss Universe pageant to various real estate ventures outside of Russia that were connected in ways to wealthy Russian investors. As Donald Trump Jr. admitted at a real estate conference in 2008, "Russians make up a pretty disproportionate cross-section of a lot of our assets. We see a lot of money pouring in from Russia."

3. Trump's campaign had an unusually large number of associates who, in one way or another, proved to have been compromised by the Russian government. The most conspicuous of these include his former national security adviser, Michael Flynn, who pleaded guilty to lying to the FBI about his contacts with Russia in December and who had extensive connections with President Vladimir Putin's regime before he was hired by Trump; his former campaign manager Paul Manafort, who served as a close political adviser to former Ukrainian President Viktor Yanukovych, who was a puppet for the Putin regime during his tenure in that country; former campaign adviser Carter Page; former Secretary of State Rex Tillerson; his former adviser and longtime friend Roger Stone; and a number of others.

4. Trump himself has taken a dovish approach toward Russia for years, one that is wildly inconsistent with the hawkish tone he takes toward every other country. It would be one thing if Trump was a staunch non-interventionist who viewed geopolitics through the same lens as a paleoconservative like Pat Buchanan or a libertarian like Ron Paul. But he isn't; on pretty much every major foreign policy issue of our time, Trump's views are indistinguishable from those of the mainstream in the Republican Party. The one exception is Russia, where Trump has repeatedly called for a closer alliance with that country (and is even reported to have directed the party to soften a plank in their platform that they felt was too harsh on Russia for its invasion of Ukraine), where he has dragged his feet on implementing punitive sanctions that were only imposed in the first place because Congress made it politically impossible for him to oppose them and where he has repeatedly cozied up to Putin even when doing so worked against the stated interests of the United States.

5. Trump has gone out of his way to discredit the investigation into him, which seemingly borders on obstruction of justice even if one generously assumes he's simply doing this as an innocent man in a panic — but which, if we're going to be honest with ourselves, seems like the desperate flailing of a man who doesn't want to be caught having done something wrong. He has also on many occasions challenged the basic premise that Russia meddled in our election on his behalf, which at best simply leaves us vulnerable to future meddling and at worst does both that and confirms our worst fears about Trump's own actions.

None of this means that Trump shouldn't receive the same benefit of the doubt to which all Americans are entitled, the presumption of innocent until proven guilty. It doesn't even mean that Americans who support Trump's policy agenda shouldn't continue to do so, provided that they take care to separate the ideas and goals from the man himself.

What it does mean — what it must mean, if one values such things as national sovereignty — is that people must hold Trump accountable if they care about the integrity of America's democratic process, the supremacy of the rule of law over powerful individuals and the rights of American citizens to live in a country whose autonomy is respected. This requires three things:

1. We must demand that Trump allow the investigation led by Special Counsel Robert Mueller to run its course without being impeded by political pressure from the president or his supporters, either in Congress or the media.

2. We must demand that Trump and his successors take every measure necessary to protect our electoral process from being compromised in the future, whether by Russia or any other aggressor.

3. We must accept that Russia is not our friend and that the Cold War which seemed to have ended in 1991 was officially revived in 2016 due to their meddling.

When Trump's legacy is assessed, it will likely be viewed in a similar light as that of President John Tyler (1841-1845), the only president to ever commit an act of public treason.

In Tyler's case, his traitorous deeds occurred more than a decade after his presidency had ended, when he decided to side with his state (Virginia) over his country (America) during the Civil War. His actions weren't minor either: Tyler led a committee that bargained for Virginia to join the Confederate States of America and was elected to both the Provisional Confederate Congress and the Confederate House of Representatives, although he died shortly before he could serve on the latter.

Tyler did a number of good things as president — in particular, he established the legitimacy of vice presidents who ascend to that office due to the deaths of their predecessors, stood up to the two-party system and brought Texas into the union — but he sold out his country and, making matters worse, did so for an evil cause (slavery). If it is established that Trump also sold out his country for an evil cause (personal gain), then he will be consigned to the ash heap of history just like Tyler, even if also, like Tyler, he manages to avoid legal accountability for his crimes.

The only question that remains is whether Trump supporters will be able to remember themselves as true American patriots, like the ones we honor on Memorial Day weekend, or as craven partisans who hated Democrats and/or the military-industrial complex more than they loved their own country.

Matthew Rozsa grills Roger Stone about his connections to Russia.