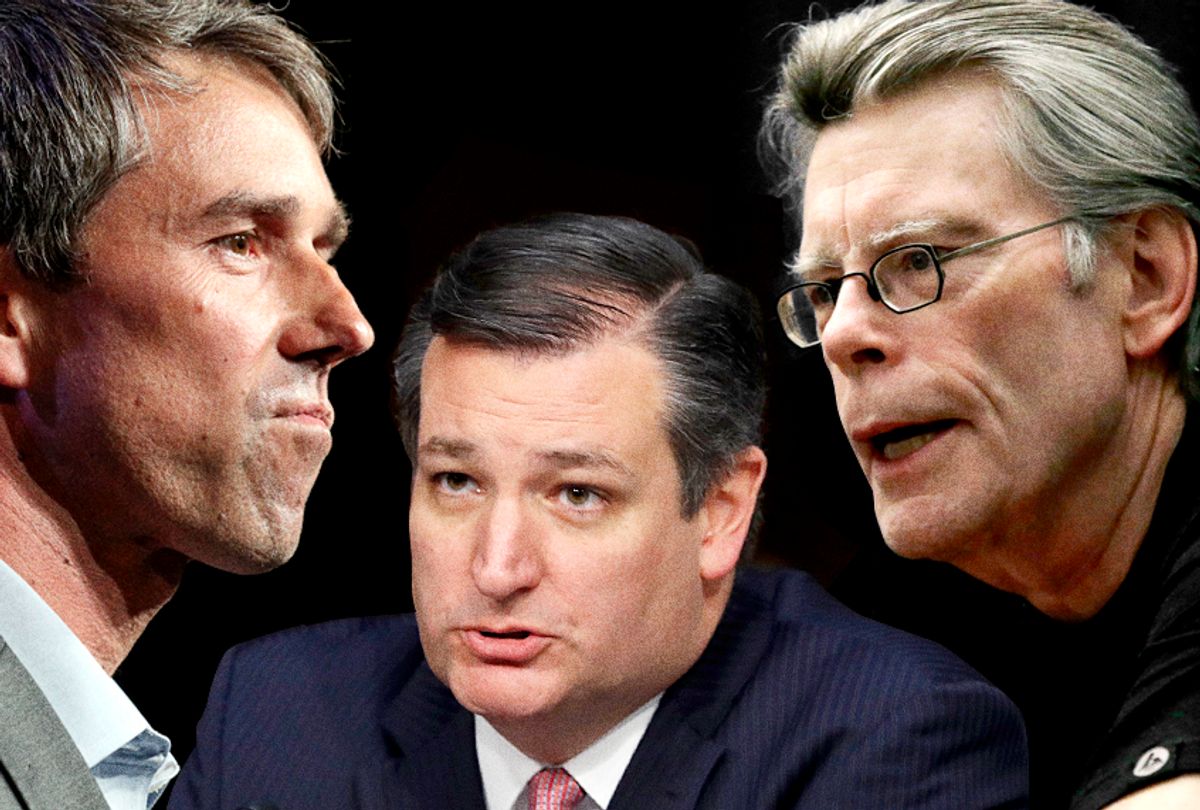 Sen. Ted Cruz, R-Texas, may claim to be hard-pressed to find the time to debate his Democratic opponent, Rep. Beto O'Rourke, ahead of the midterm election, but he apparently has plenty of time to waste on a war of words with popular horror novelist Stephen King.

The following exchange occurred on Twitter this week between Stephen King, the acclaimed author of classic novels like "Carrie" and "It," and Cruz, who attempted to reference some of King's oeuvre in his rebuttal even though at least one of those allusions — to the line "Heeeeere's Johnny!" — comes not from a King book, but from a film adaptation of that book (namely, Stanley Kubrick's controversial "The Shining").

While Cruz's back and forth with King may seem like a harmless diversion, it takes on a somewhat more sinister tone when you consider that the former presidential candidate has yet to finalize a debate with his Democratic opponent in the upcoming election, Rep. Beto O'Rourke.

"On April 24, we extended an invitation to Senator Cruz to participate in six debates — including two in Spanish — reaching all twenty media markets in the state," Jody Casey, O'Rourke's campaign manager, wrote to the Cruz campaign on Monday, according to the Dallas Morning News. The letter mentioned that the deadline for scheduling a debate between Cruz and O'Rourke was May 10.

"Because Senator Cruz recently indicated that he is uncomfortable debating in Spanish, our campaign would be happy to add two additional debates in English instead," Casey's letter added.

The Cruz campaign responded on the same day with a letter by Bryan English, one of Cruz's senior advisers.

"As you pointed out in your second note, the Senator has made it quite clear he is looking forward to debating Congressman O'Rourke. However, your arbitrary timeline for coordinating between the campaigns remains irrelevant to our decision-making process," English wrote.

He added, "We will let you know when we are ready to discuss the details of joint appearances."

During an interview with the Dallas Morning News, O'Rourke made it clear that he does not consider a debate with Cruz to be an easy win for himself. If anything, he acknowledged that Cruz would be a formidable challenger.

"He was a Princeton debate champ. This is his thing. I don't in any way think that this would be easy but I do think it's necessary," O'Rourke told the News.

Cruz was a top competitive debater at Princeton University. He argued nine cases at the U.S. Supreme Court, many as the state's chief appellate lawyer. He held his own through a dozen debates against Donald Trump and others in the 2016 presidential primaries, plus eight other candidate forums.

Cruz has managed to maintain a 5 to 11 point lead over O'Rourke in polls taken over the past month-and-a-half, explaining why would want to avoid compromising his position through a debate that could still conceivably go poorly for him. Perhaps reinforcing that concern on Cruz's part is the fact that O'Rourke has continued to outperform Cruz in fundraising. As the Texas Tribune reported:

Beto O'Rourke, the Democratic nominee for U.S. Senate in Texas, raised more than $10.4 million over the past three months, he announced Wednesday, revealing a sum that takes his already massive fundraising to new heights.

And the El Paso congressman again vastly outraised the Republican incumbent, Ted Cruz, who took in less than half of his challenger's haul — $4.6 million — at the same time, according to his campaign. O'Rourke also took a decisive lead in cash on hand over Cruz with four months to Election Day, $14 million to $10.4 million.

O'Rourke's latest haul is easily his biggest yet — topping the $6.7 million he raked in during the first quarter, which was far more than Cruz raised for the same period. Cruz's second-quarter fundraising also was his largest yet, though not nearly enough to keep up with O'Rourke's torrid pace.

O'Rourke has now outraised Cruz for every period but one since O'Rourke launched his Senate bid in March 2017.

Check out the major news stories of today!