"You know, he goes for an employee review with Vladimir Putin," conservative panelist Ana Navarro said of Trump 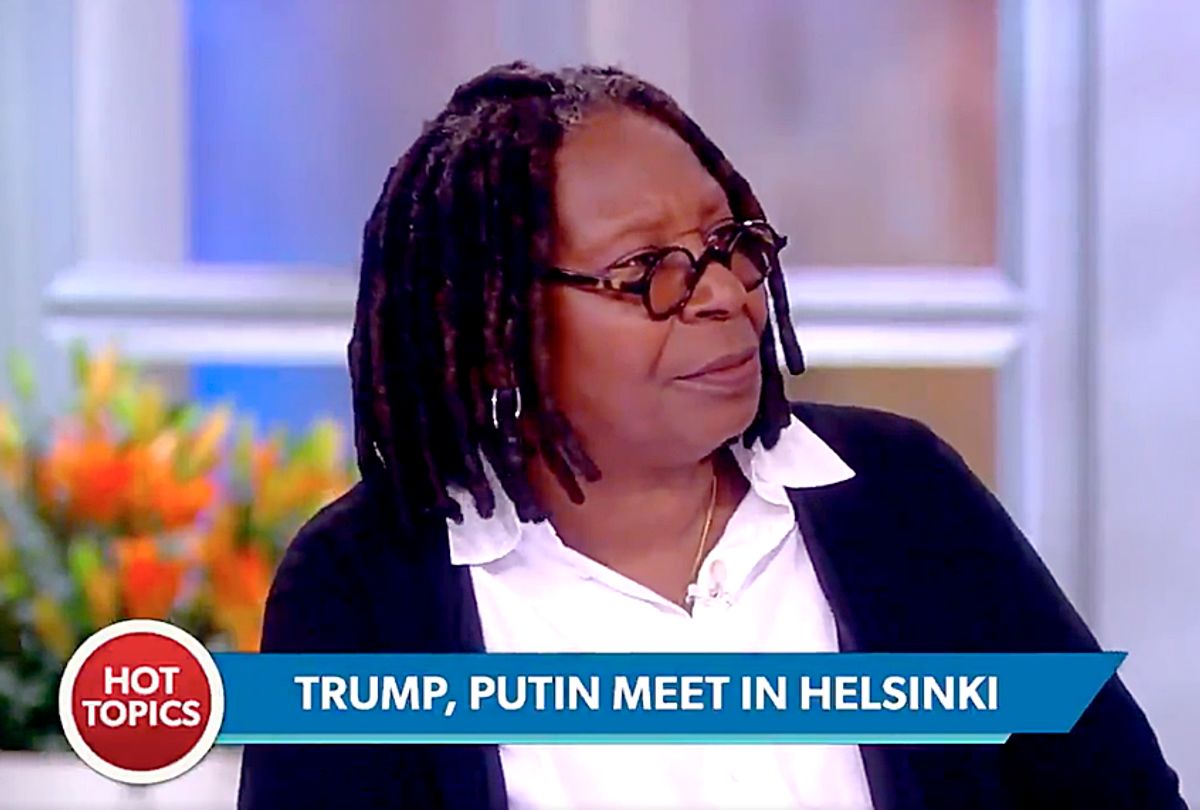 Whoopi Goldberg on "The View" (Twitter/TheView)
--

Heading into Monday's historic summit in Helsinki, President Donald Trump went out of his way to cozy up to Russian President Vladimir Putin. On Twitter, Trump infamously declared "our relationship with Russia has NEVER been worse thanks to many years of U.S. foolishness." Then, he winked at the Russian president before deliberations began.

When the two world leaders finally emerged from their closed-door conversation, Trump announced he had sided with Putin over the U.S. intelligence community's assertion that Russia had meddled in the 2016 presidential election.

"President Putin says it's not Russia," Trump told reporters gathered in Finland. "I don't see any reason why it would be."

Scores of Republicans were left wondering if Trump, who has stated that his foreign policy is "America First," was still representing the interests of the U.S., or instead one of its biggest adversaries, Russia. One of the most blunt criticisms of his performance came from conservative political analyst Ana Navarro, who appeared Monday as a guest panelist on "The View."

"You know, he goes for an employee review with Vladimir Putin," Navarro said on the ABC talk show.

That choice of words followed a lengthy discussion from Meghan McCain about war crimes that Russia has committed overseas. After a discussion of the annexation of Crimea and chemical weapons attacks in Syria, it was Navarro who brought the conversation home.

Whoopi Goldberg, who serves as the show's moderator, wondered if Trump's bromance with Putin had evolved into more than a crush, thus warranting an intervention from the Department Homeland Security

Co-host Sunny Hostin, who is also the senior legal correspondent for ABC News, interrupted to add a nugget of wisdom from her days as a prosecutor: "Or worse."

Goldberg then shared her visceral reaction to the president's decision to meet with Putin a mere three days after the special counsel Robert Mueller indicted 12 Russians for hacking and stealing information from Democrats during the 2016 presidential election while Trump was meeting with Queen Elizabeth II at Windsor Castle.

And Putin and Trump's meeting was not the only item that Goldberg had on her dislike list. The Academy Award winner brought up the negative headlines that Trump has generated during a controversial overseas trip in which he called Germany a "captive" of Russia, labeled the European Union a foe and humiliated British Prime Minister Theresa May in the press while in London, just to name a few incidents.

"I don't like this whole last trip," Goldberg concluded.

"Look, this entire trip has felt like a disaster," Navarro added. "He gets to England, and he's like trashing Theresa May. He's got the queen scurrying about like a Corgi."

But Navarro saved her comments with the most bite for last.

"The Republican Party is sadly silent, and thus complicit with what is going on," she said at the end of the hot topics segment.

McCain, who did user her platform to criticize Trump in a manner as direct as Navarro, in turn insisted: "I'm not silent!"