“That’s a bad lie!": Sarah Sanders called out for blaming Kelly's grimace on lack of a hot breakfast

″[He] was displeased because he was expecting a full breakfast and there were only pastries and cheese,” she said 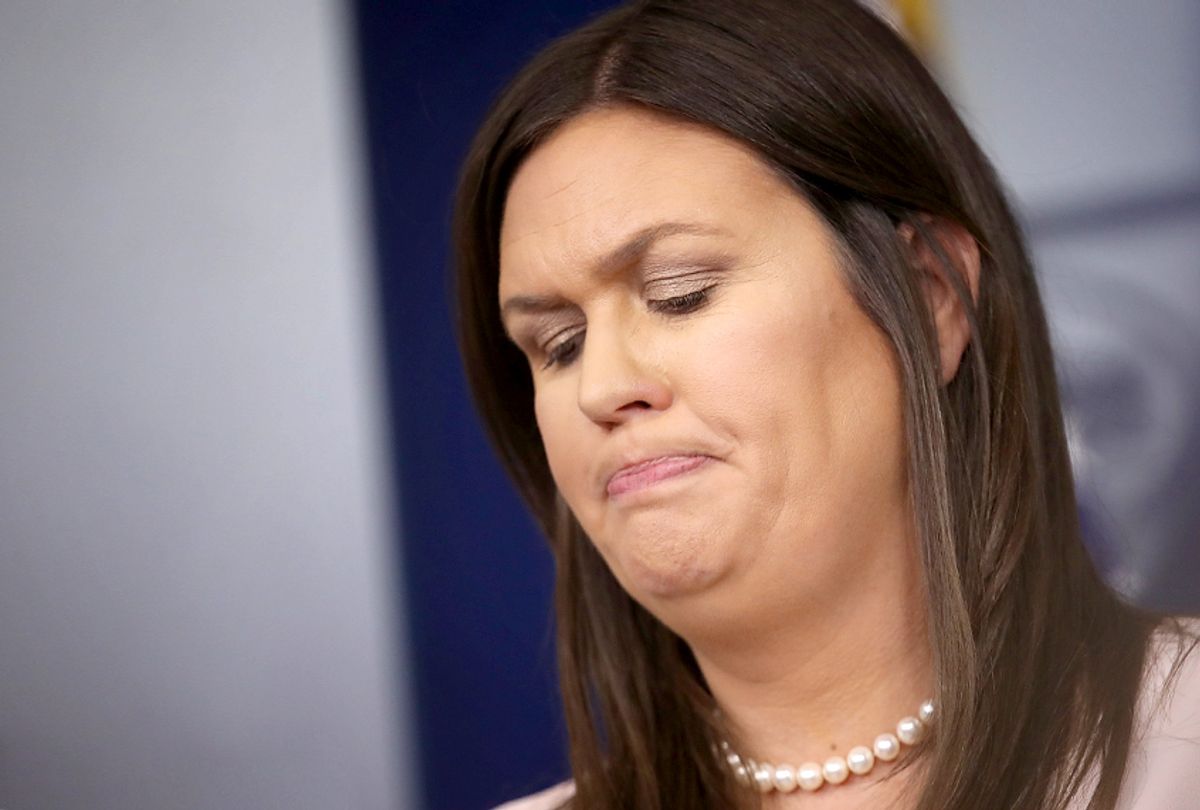 Sarah Huckabee Sanders has a precarious explanation for the viral video footage that appeared to show White House Chief of Staff John Kelly grimacing while President Donald Trump declared that "Germany is a captive of Russia" during a meeting on the opening day of this week's NATO summit in Brussels.

The White House press secretary blamed Kelly's refusal to "say cheese" for the camera on the literal cheese at the breakfast meeting with NATO Secretary General Jens Stoltenberg.

"[He] was displeased because he was expecting a full breakfast and there were only pastries and cheese,” Sanders told the Washington Post.

But the women of "The View" were not buying Sanders' spin, and co-host Joy Behar even went so far as to call her bluff on Thursday.

“That’s a bad lie,” the comedian said before adding, “That is the lamest excuse I have ever heard.”

This is far from the first time Sanders has been called out for lying by members of the media. In June, Salon's Shira Tarlo covered the controversy that erupted over misleading statements Sanders made about the now-legendary Trump Tower meeting in June 2016 that included Donald Trump Jr. and a Russian attorney:

White House press secretary Sarah Huckabee Sanders was widely criticized for her refusal to explain the inaccurate statements she made following the revelation that members of President Donald Trump's 2016 presidential campaign had secretly met with a Kremlin-linked lawyer.

On the set of CNN's "New Day," John Berman, the show's new co-host, blasted the press secretary for spewing falsehoods about who authored the official White House response to the controversial Trump Tower meeting that included Donald Trump, Jr.

"Maybe she's OK with lying. There's no question that she spread lies at this point," Berman said on Tuesday. "Whether or not she was told the truth, I guess we don't know. But she spread a lie, and she is the White House press secretary. And she spread a lie – and allowed it to hang out there for months."

Whether Sanders' statements about Kelly's alleged disappointment with the continental breakfast are true or false, her spins have become increasingly desperate, as another "View" host observed.

“It’s like she’s grasping for straws at this point. She has to come out every day and grab something new," Behar's co-host Sarah Haines said. "And, it’s like she lives a verbal and vocal ‘caption this’ every day.”

Dafna Linzer, the managing editor for politics at NBC News and MSNBC, made an analogy that helps demonstrate the potential absurdity of Sanders' claim.

"A four star Marine General, who led US troops north from Baghdad in 2003, couldn’t conceal his displeasure with pastry, the White House wants the world to know," Linzer tweeted on Wednesday.

Meghan McCain offered another theory for the visible discomfort on Kelly's face, bringing up rumors of palace intrigue at the White House between Kelly and Trump's new director of communications Bill Shine – who was McCain's former boss at Fox News.

“Because of [Shine's] new role and his new power ... maybe John Kelly has less influence," McCain said on ABC. "So that could be why his face looks like that. I don’t know."

A recent report from the Hive's Gabriel Sherman details how the rumored power grab is allegedly playing out:

The ascent of Shine, who was ousted from the network for his handling of its myriad sexual harassment scandals, has intensified speculation in the West Wing that the president’s long-suffering chief of staff and nemesis, John Kelly, will soon be departing. Kelly opposed the hiring of Shine and has seen his role continue to be diminished, sources said, sometimes in humiliating ways. “They’ve basically stopped telling Kelly when meetings are. People leave him off the calendar,” one administration official told me. “When he finds out, he storms into the room and is like, ‘What’s going on?’” A Republican close to the White House told me that Trump hopes Shine’s expanding role will encourage Kelly to quit. “Trump is too chickenshit to fire Kelly himself,” the source said. The strategy is reminiscent of the president’s decision to hire Anthony Scaramucci as communications director in July 2017 to drive out then-chief of staff Reince Priebus. “This is a more subtle version of Scaramucci,” an outside adviser to the White House told me.

And Sanders could be caught in the crosshairs. Sherman's report also quoted an unnamed source regarding Shine's less-than-favorable view of Sanders' performance:

The administration official said that Shine thinks Press Secretary Sarah Huckabee Sanders is doing “O.K.,” but he eventually wants to bring in someone with “more energy.” (In June, CBS reported that Sanders was planning on leaving the White House by the end of the year.)

Was Sanders' defense of Kelly a way to court favor with Shine? Or, when it all comes down to it, was there a more logical explanation – one involving nature?

"So you think he had gas?" Whoopi Goldberg deadpanned on "The View." "He just needed to be burped, that’s all."