"Patriots need to stand up and reject the behavior of this president," Comey said in a blistering rebuke of Trump 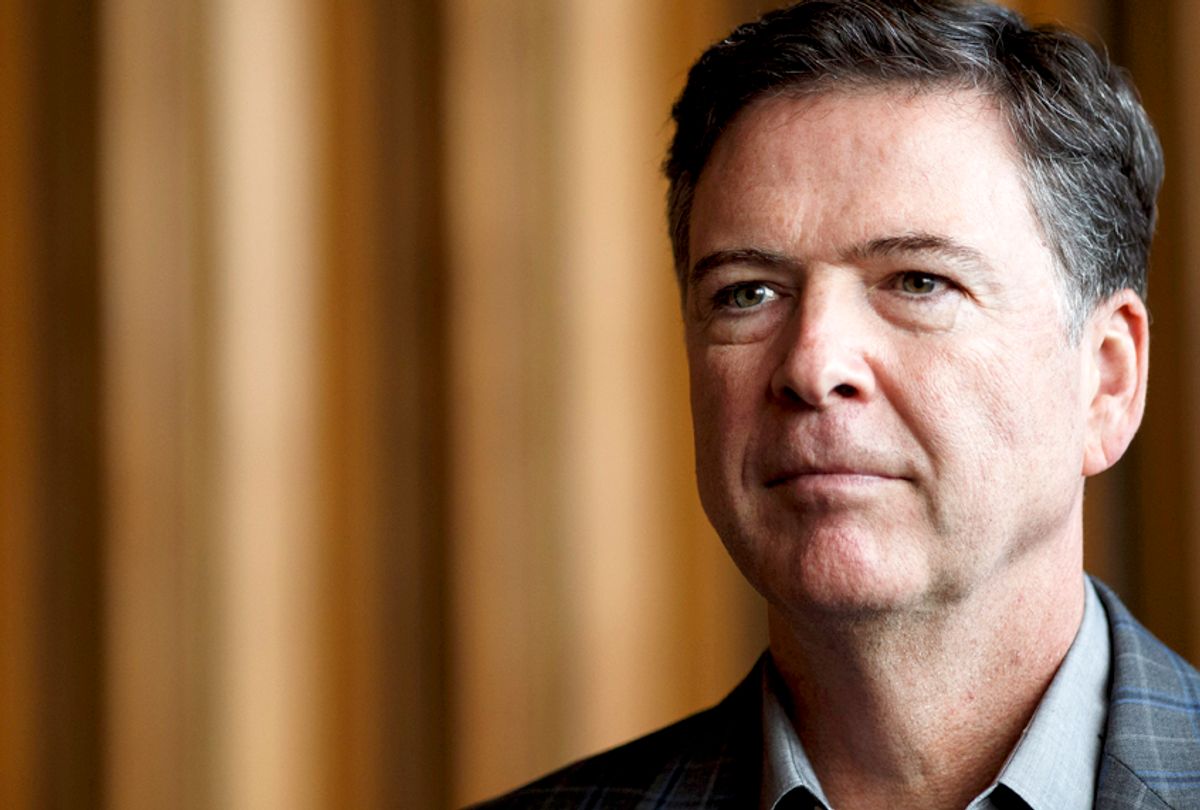 James Comey has publicly urged "all who believe in this country's values" to vote for Democrats in November's midterm elections, because "history has its eyes" on America.

The former FBI director also slammed the current GOP-controlled Congress as "incapable of fulfilling the Founders' design" in his Tuesday evening tweet.

"This Republican Congress has proven incapable of fulfilling the Founders' design that 'Ambition must ... counteract ambition.' All who believe in this country's values must vote for Democrats this fall," Comey tweeted. "Policy differences don't matter right now. History has its eyes on us."

Comey, who was abruptly fired by President Donald Trump in May 2017, also spoke out Monday against the commander-in-chief's widely-panned remarks supporting Russian President Vladimir Putin over the U.S. intelligence community during a joint press conference in Helsinki, Finland.

"This was the day an American president stood on foreign soil next to a murderous lying thug and refused to back his own country," Comey tweeted. "Patriots need to stand up and reject the behavior of this president."

The former FBI director, who served under both Republican and Democratic administrations, revealed during his July 2016 testimony before Congress that he was no longer a registered member of the GOP. (He had been for most of his life.)

This is not the first time that Comey has publicly voiced his frustration with the Republican Party. In April, he acknowledged that Trumpian politics had driven him away from the GOP.

"The Republican Party has left me and many others," he told the ABC News podcast “Start Here. "I need no better evidence than their new website . . . attacking me. I just think they've lost their way, and I can't be associated with it."

"I see the Republican Party — as near as I can tell — reflects now entirely Donald Trump's values," Comey added during the interview. "It doesn't reflect values at all. It's transactional. It's ego-driven. It's in service to his ego."

Despite Comey's departure from the GOP, some Democrats — the party's 2016 presidential candidate Hillary Clinton included — have pointed to the former FBI director's decision to renew its investigation into Clinton's use of a private email server less than two weeks before Election Day as a contributing factor to Trump's victory.

The agency ultimately did not uncover anything new, and Clinton later described the move as "the determining factor" in her loss.

"It stopped my momentum. It drove voters from me," Clinton told TODAY in September 2017, her first live interview since the race. "And, so that — in terms of my personal defeat — was the most important factor."

Petkanas doubled down in follow tweet, writing: "How sh**ty of a political operator is Comey? He thought Hillary was going to win so it didn't matter if his public decisions helped Trump. He thinks it's helpful for a witness in an obstruction of justice case against Donald Trump is out there campaigning for Democrats. STFU."

Comey's recent statement, which is likely to confuse and anger other Democrats and former Clinton staffers, could also receive flak from members of the GOP.

"A year and a half with President Trump: Lower taxes, reduced regs, unemployment down, economy growing, Gorsuch on the Court, Kavanaugh on deck, out of Iran Deal, Embassy in Jerusalem, hostages home from NK," Jordan wrote on Twitter. "But Comey says change course. Really?"

As Petkanas alluded to, in addition to following in Jordan's footsteps and rushing to the president's defense, other Republican lawmakers could use Comey's tweet in an attempt to discredit U.S. intelligence agencies and blast the Mueller probe as a "witch hunt." For now, time will tell.