After his performance in Helsinki, Trump could not even earn the support of the conservative co-host of "The View" 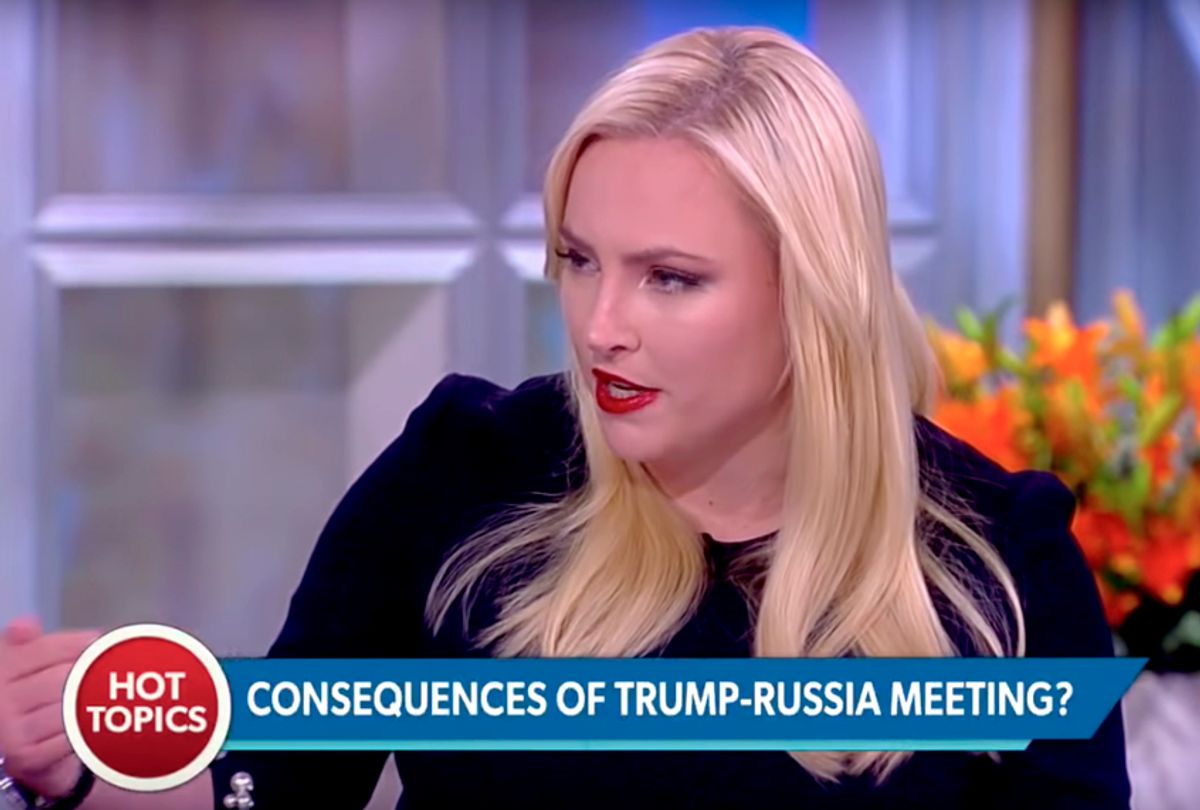 President Donald Trump's controversial summit with Vladimir Putin, in which he stood by the Russian tyrant over the U.S. intelligence community, has been met with such swift and widespread backlash that Trump's even lost the support of the lone conservative voice on "The View."

Declaring that "it's a really scary day to be an American," Meghan McCain's reaction was so intense that she declared it a moment to "screw party lines."

The former Fox News contributor did not stop there in her devastating review of Trump's made-for-TV press conference in Helsinki, Finland.

"What happened yesterday is extremely dangerous, it’s un-American, it’s unpatriotic," she said. "Our president acted like a pathetic puppy who was completely neutered around a former KGB agent, [a] murderous dictator who has caused some of the worst atrocities."

For the second day in a row, McCain then brought up the genocide taking place in the Syrian civil war: "Let me say it again – genocide going on in Syria."

Since the deadly March 2013 attack in Aleppo, hundreds have died and thousands more have been harmed, according to Al-Jazeera. Known chemical agents deployed on the Syrian people have included: chlorine gas, mustard gas, sarin and white phosphorus.

Human Rights Watched analyzed data from chemical weapons attacks that took place in the worn-torn nation between Aug. 21, 2013 and Feb. 25, 2018. "The information, based on data from seven sources, shows that the Syrian government is responsible for the majority of 85 confirmed chemical weapon attacks," the organization stated on its website.

“I just don’t want the country to get gaslit into thinking that this is normal, that somehow having a relationship with a murderous dictator and saying that we’re morally equivalent to this man," McCain continued.

A self-described "Reagan hardcore Republican," McCain recalled growing up with knowledge of the phrase, "Mr. Gorbachev, tear down that wall!" Decades later, a new GOP president is supporting a country who American intelligence agencies have concluded attacked the pillar of democracy: its free elections.

"I just never thought this is the Republican Party I would see," she lamented.

McCain is the daughter of Sen. John McCain, who Trump infamously said was only a war hero because he was captured: "I like people that weren't captured, OK?"

Perhaps because of these moments, which could evoke bias, McCain let America know that she was "not overreacting" with her comments.

"I cannot emphasize this enough. I am not an ardent, never Trumper person," she said as she drilled her point home. "You guys know me very well."

Indeed, McCain does often draw conclusions on an issue-by-issue basis, as she claimed. For example, McCain infamously melted down on live television while backing the president's opposition to NFL players kneeling during the national anthem in protest of racial injustice.

"I would never be OK with someone not saluting the flag," she said at the time.

Ultimately, McCain was sure of one thing Tuesday: The worst day of Trump's tenure in the Oval Office had taken place the day before in Finland.

“Its times like today that I am in agreement with this table," she said. "I would like more Republicans to rage against this today."

For his part, Senator John McCain said that Trump's press conference marked a "low point in the history of the American presidency."

“No prior president has ever abased himself more abjectly before a tyrant. Not only did President Trump fail to speak the truth about an adversary; but speaking for America to the world, our president failed to defend all that makes us who we are — a republic of free people dedicated to the cause of liberty at home and abroad," the senator said in a statement.

Comedian Joy Behar, a co-host of "The View" who also has veterans in her family, wondered if America's democracy, which was fervently defended in past world wars, was now at risk.

“What really angers me is my father and my uncle did not fight fascism in the 30s and 40s to have a fascist running this country," she said. "I mean, what is going on?"