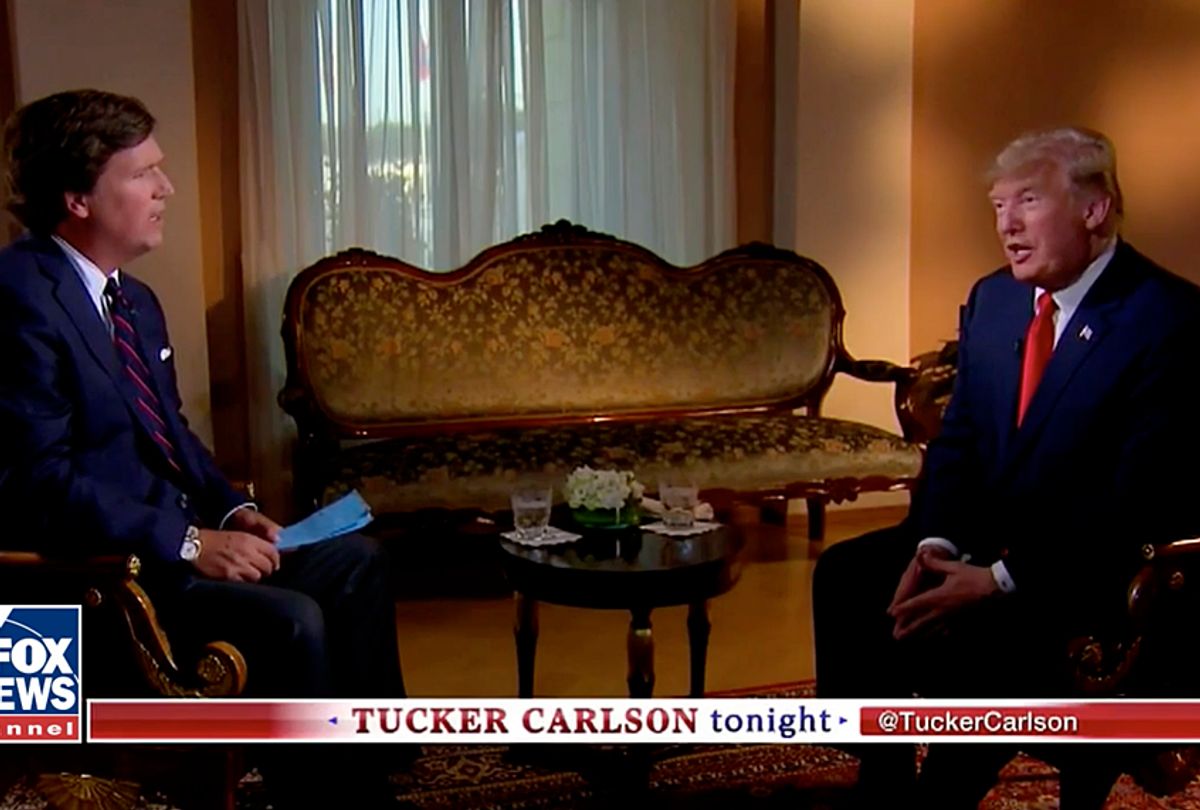 A previous version of this story incorrectly identified Trump's quote from his press conference with Putin as occurring during his interview with Carlson.

President Donald Trump, who claimed that he misspoke during his controversial press conference with Vladimir Putin, did not offer any clarifications during his interview with Fox News host Tucker Carlson that occurred shortly after the widely criticized appearance between the two world leaders.

Just hours after his flabbergasting statement in Helsinki — and hours before his bizarre attempt to walk it back — Trump repeated his assertions that Putin's claim of innocence should be trusted and that suggestions to the contrary are politically overcooked.

"President Putin, he just said it’s not Russia. I will say this — I don’t see any reason why it would be," Trump said during his press conference with Putin and contradicting his subsequent claim that he had meant to say that he couldn't see any reason why Russia "wouldn't" have been the antagonistic country.

But when given an opportunity to make such a correction immediately afterward, Trump instead continued to attack the U.S. intelligence government. Trump attacked former CIA director John Brennan, who has been critical of Trump's conduct regarding Russia.

"I think John Brennan is a very bad guy, a lot of things happened under his watch, I think he’s a very bad person," Trump told Carlson. "I think if you watch Peter Strzok and Lisa Page, when you look at all the things that have happened, Comey, if you take a look at that and McCabe who’s got problems I assume, you look at the deception, the lies and what’s gone on in the last fairly long period of time. Before I won, long before I won, during the campaign, I guess probably during the Republican when I was fighting against 17 other Republicans, so this has been going on for a long time. These are people that in my opinion are truly bad people. They are being exposed for what they are and it’s a shame that it has to happen but it’s really hurt our country."

In the days since the Helsinki summit, Trump has tried to recast his capitulation to Putin — as well as to North Korean dictator Kim Jong-un — as successes. He took to Twitter on Wednesday morning to reiterate those points.

Following his controversial meeting with Russian President Vladimir Putin in Helsinki on Monday, President Donald Trump had granted his first post-summit interview to one of his most sympathetic supporters in the media — Fox News host Sean Hannity.

After opening his show with a lengthy diatribe against liberals for claiming that Trump's performance with Putin was anything other than exemplary, Hannity went on to give Trump a platform for reaffirming all of his favorite talking points about the ongoing Trump-Russia scandal.

It is noteworthy that Trump made a quip about Carlson during that exchange with Hannity, reflecting on the cozy relationship that both men have developed with the president. While it is hardly unprecedented for sitting presidents to develop warm contacts with sympathetic members of the press, the relationship between Trump and both Hannity and Carlson is unusual in the degree to which it requires the latter pair to come up with increasingly creative spin to cover up the former's numerous scandals.

Dan Pfeiffer talks about Fox News in the Trump era.