"Can we call anybody a slut?": GOP congressman complains of PC culture run amok 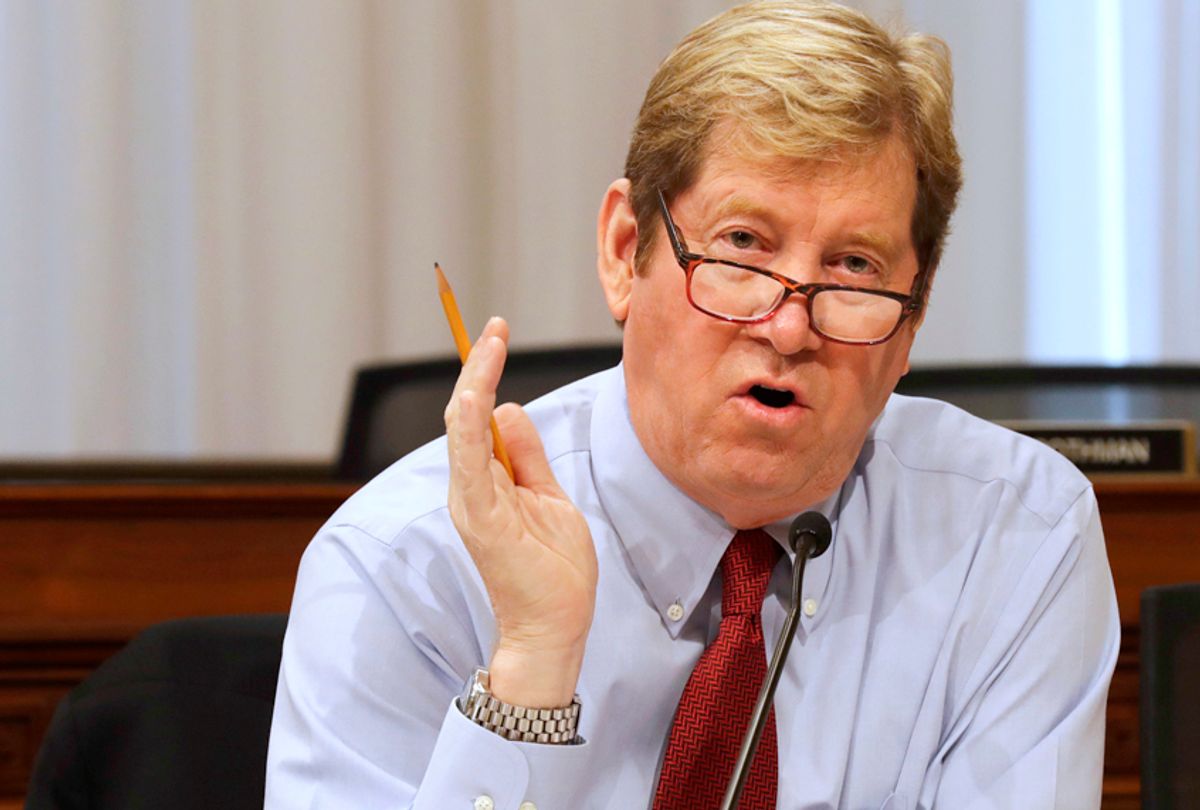 Rep. Jason Lewis, R-Minn., is under fire due to the release of clips from his old radio talk show in which he denigrated sexually active women as being "sluts."

The scandal involves segments from Lewis' old show that were provided to CNN's KFile by Michael Brodkorb, the former deputy chair of the Minnesota Republican Party, according to CNN. A running theme in the clips was Lewis' disdain for women who are sexually active and his desire to see the epithet "slut" become socially acceptable as a way of condemning their behavior and overall character.

"Well, the thing is, can we call anybody a slut? This is what begs the question. Take this woman out of it, take Rush out of it for a moment," Lewis explained during one episode that aired in March 2012, alluding to a controversy in which Rush Limbaugh had referred to then-graduate student and activist Sandra Fluke as a "slut" for believing that female contraception should be covered by health insurance companies. "Does a woman now have the right to behave — and I know there's a double standard between the way men chase women and running and running around — you know, I'm not going to get there, but you know what I'm talking about. But it used to be that women were held to a little bit of a higher standard. We required modesty from women. Now, are we beyond those days where a woman can behave as a slut, but you can't call her a slut?"

"Now Limbaugh's reasoning was, look, if you're demanding that the taxpayers pay for your contraception, you must use a lot of them and therefore, ergo, you're very sexually active and in the old days, what we used to call people who were in college or even graduate school who were sexually active, we called them sluts. Especially if you want somebody to pay for it. Now you know, obviously that's a stretch. It was meant as an aspect of entertainment radio."

Lewis added, "But have we really got to the point where you can't refer to Madonna as a slut without being sued? I mean, Madonna has had a series of lovers, as have many in Hollywood. Now in the old days, what did we call this? Madonna dresses up in these sorts of prostitute-like outfits on stage, and she goes there and she sings and she shows half of her body. What did we call those people? 30 years ago? 40 years ago? 50 years ago? You can't do that today, it's too politically incorrect?"

In different broadcasts on August 2012 and November 2012, Lewis combined his theme about women being promiscuous with the argument that women are emotional rather than rational. His basis was the fact that female voters were expected to disproportionately support President Barack Obama's reelection bid — and ultimately did precisely that.

"To the degree that the Republicans or conservatives or Mitt Romney has an issue with the women, maybe it isn't Mitt Romney or his positions. Maybe it's the women. We all know that women tend to vote more liberal than men. It is the women who are guided by more emotion than reason. 'Oh, here we go, stereotyping, stereotyping females once again. What are you doing?' Well, I'm not running for anything. I'm just making an observation," Lewis said.

He also argued that "one of the reasons that the Democrats love the quote unquote female issue is because they know women vote more liberally than men do. Now you could say in a very, very sexist, misogynistic way that, 'well, that's because women just don't understand money. They don't understand, they don't handle finances. They're guided by emotion not reason." Lewis then tried to argue that he wasn't "validating the stereotype," although none of his subsequent comments attempted to walk back what he had just said.

In November, Lewis vented his frustration at women who supported Obama by saying that "there is something here going on with women who are playing into that stereotype that they're not thinking." He added, "Oh, 'I know that's awfully prejudicial because the only way you can think is it a vote Republican, Jason.' I'm not saying voting Republican, but when you reliably almost a knee-jerk Democrat vote — is birth control really that important to you ladies? Is that really the most important thing that you get your condoms for free?"

Insisting that women supported Obama because of his stance on birth control, Lewis expressed contempt for those female voters, even arguing that they weren't really human beings and had no brains.

"You can be bought off for that? I mean, boy, that's the, all the other issues: the Hispanic problem, social issues, class warfare, you know, we can figure out a way to tackle those. This one, if you're that far down the road and you say you're a human being, I've got my suspicions. You're not, you're without a brain. You have no, you have no cognitive function whatsoever. If that's all it takes to buy you off."

When confronted about his comments on Thursday, Lewis laughed them off.

"They're back with that? That was litigated two years ago. They took my comments out of context then and, if that's all they've got this cycle, I'm afraid they won't have much. My opponent needs to start answering some questions on issues. That's what we're trying to focus on," Lewis said as he walked into an elevator.

It is unclear whether Lewis' comments will hurt him in his reelection campaign, which is occurring in a district widely regarded as being competitive. On the one hand, sexist comments about rape and abortion proved toxic to the Senate candidacies of Todd Akin in Missouri and Richard Mourdock in Indiana in 2012. Then again, Donald Trump made a number of sexist comments during his 2016 campaign for the presidency and was ultimately elected anyway.