Boots Riley's directing debut sounds off on many issues, the first being what using a "white voice" can gain us 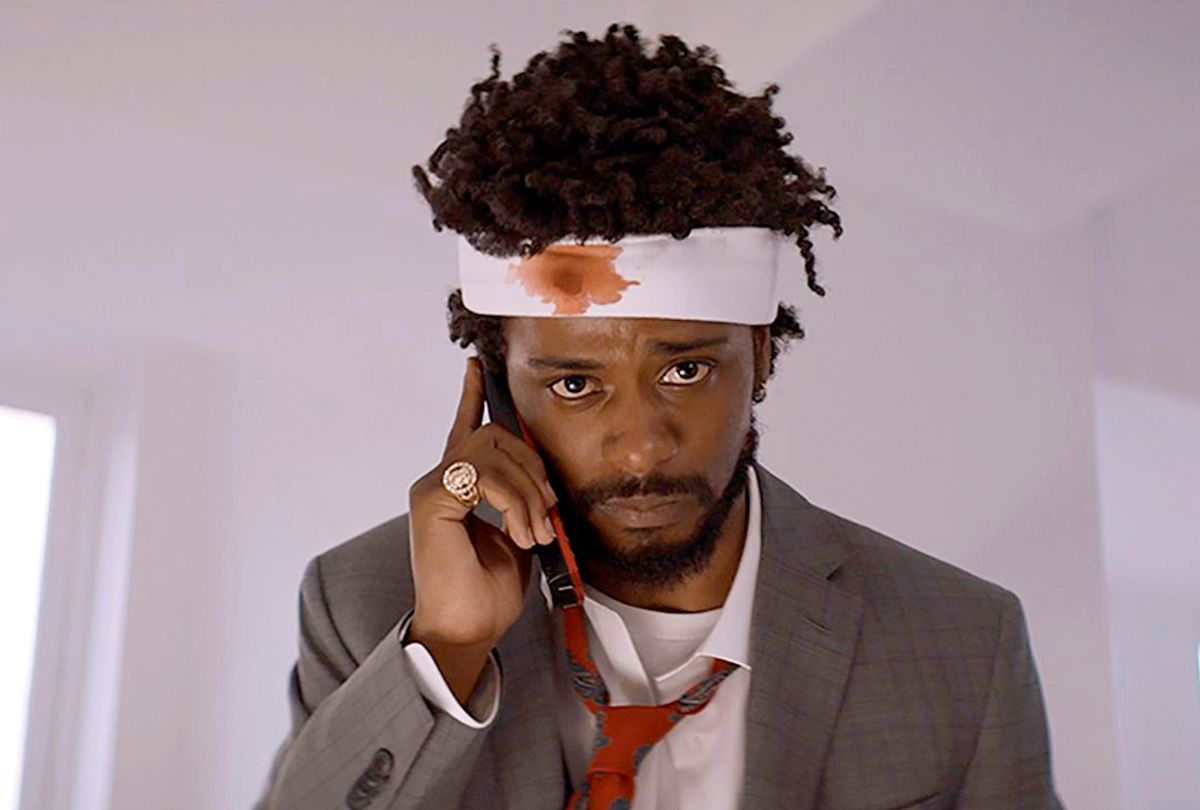 It was Cassius Green’s white voice in the ads for “Sorry to Bother You” that grabbed my attention. Not the voice itself, although it’s distinctly jarring to hear David Cross’ voice coming out of Lakeith Stanfield’s mouth.

Rather, it’s the film’s upfront acknowledgment that how you speak, not merely what you say, can open up opportunities. That, for people of color, it can mean the difference between getting a good job and enjoying significant career advancement. But it also carries social penalties.

Boots Riley describes his directorial debut as “an absurdist dark comedy with magical realism and science fiction, inspired by the world of telemarketing.”

Even the simplest description of “Sorry to Bother You” doesn’t adequately sum up its themes, and that’s fine. The less virgin viewers know about the film, the better.

Just know this: “Sorry to Bother You,” currently playing in theaters, is a crazy quilt of warped plots and statements, though one designed and carefully constructed. It should throw the viewer for a loop, because it’s a reflection of the insane times we live in.

Having said all that, one of the clearest characterizations of “Sorry to Bother You” is that it’s a parable about selling out, one that’s equal parts a polemic and an acknowledgment that it’s almost impossible not to sell out in some way.  Ours is a world of extreme economic disparity, where wealth is held by a select few who aren’t giving up even a percentage of a percent of it. That is, except to those willing to give up a portion of ourselves for a bigger taste.

The concept of selling out means different things to different people and different generations. Millennials drowning in debt have no problem with it, we've been told, because they have no other choice. Generation Xers railed against it, or so we were informed in movies like “Reality Bites.” If you had talent, the worst thing you could do for your soul was allow some corporate entity to claim and corrupt it in exchange for filthy lucre. (That was before our joints started giving out and we realized how expensive health insurance is.)

But being called a “sellout” has an entirely different meaning to a white artist than it does when one person of color flings that insult at another. One is about integrity, the other is a deeply biting invective meant to de-legitimize a person’s identity or cultural experience.

In “Sorry to Bother You,” Riley examines the intersection of these definitions, positing that sometimes, intentionally or not, the “white voice” is where it all begins.

In a recent Vice News interview, Stanfield explained that a “white voice” is not the same as “talking white,” which we’ll get to in a bit. One’s “white voice,” he explains, is an extension of “one feeling at ease and comfortable in one’s skin. One feeling as if they are part of the majority. It is something that is the opportunity mostly afforded in this country to white people.”

This is important to keep in mind as we get to know Stanfield’s Cassius, who goes by Cash, an Oakland twenty-something in desperate need of a job. His uncle Sergio (Terry Crews) puts Cash up in his garage, and he and his girlfriend, a conceptual artist named Detroit (Tessa Thompson), barely have any privacy.

The Bay Area setting of “Sorry to Bother You” provides the quintessential landscape to demonstrate the gargantuan rift between rich and poor. Oakland also happens to be Riley’s hometown; long before he began directing he was primarily known as the frontman for the hip-hop group The Coup.

His knowledge of the region reveals itself in slightly dystopian scenes of nightlife and the rainbow-colored walls sliding behind Cash as he moves through the world. Riley’s Oakland is scroungy, but it has a beauty to it worth cherishing.

That doesn’t make it an affordable place, not anymore. Sergio is on the verge of losing his house, so it behooves Cash to not only find a job, but one that will keep him sheltered.

Cash takes a position at a spiritless cold-calling farm called RegalView Telemarketing, where he scores a job selling encyclopedias that barely pays enough to buy ramen.

But even in this simple gig, Cash struggles until his co-worker Langston (Danny Glover) advises the struggling new hire to use his “white voice.” Once Cash finds it, manifesting as Cross’ voice dubbed over Stanfield’s, Cash’s career fortunes transform dramatically. Soon he moves up to the elite marketing tier known as “Power Caller.” His life also gets dramatically weirder.

Riley is careful to specify the difference between a “white voice” and “talking white,” or what Langston calls “Will Smith-white,” both of which Cash can do.

Some black folks, myself included, only find out that we “talk white” when we’re around other people of color who don’t. I’ve been told I sound super white, pretty much for my entire life. This, coupled with my name, has fooled a number of people into assuming that I’m some sorta woke Scottish lass. (About 20 years ago, in fact, a kindly man in a kilt paid an unannounced visit to where I worked at the time. He had only spoken to me on the phone and was insistent that I learn about my Scottish heritage. His surprise at meeting me was . . . memorable.)

In recent years the concept of “code switching,” the term to describe the different behaviors minorities adopt around white people, has become a hot topic.

“Talking white” is part of that, but in no way is new. Think of it as a fresh branding on a problematic cultural fact of life.

For me, “talking white” isn’t intentional but a side effect of attending a school with a lot of upper middle class white kids as well as other children of color — Asian, Latino and black — who lived in white neighborhoods.

Only later in life did I come realize the role my speech played in affording me access to people and to opportunities that peers of color who didn’t “code switch” did not, even though I was not code switching at all. One example stands out, actually, back from when I was a teenager: Talking to a manager at a “Hire the Future” program in which I participated led to a writing position. Meanwhile, others in my group were assigned manual labor duties around the corporation’s offices.

Nothing wrong with that. Except, that is, for the manager’s casual admission that my elocution was what got me noticed. He said the other kids sounded like gangbangers.

Now, everyone in the program was there to gain a leg up in a labor market predisposed to deny them opportunities that tend to come more easily to white kids. But purely based on the way they naturally spoke, my peers who had the same level of education and work experience as I weren’t even considered for this job I’ll refer to as my own version of “power caller.”

The shame of hearing that man's statement, bestowed as if it were a compliment, embedded itself deeply enough for my skin to flush all these years later at the memory of it. My gain was a small sellout on my part, and I knew it.

Hence the audacious revelation of "Sorry to Bother You" placing that ugly and heretofore mostly hidden truth in full view. Intonation, the proper accentuation of some words over others in a sentence, all of these are crucial elements of Cash’s eventual success. Riley’s addition of surreality, making the “white voice” something disembodied from Cash, highlights the absurdist value our culture places on an individual's manner of speaking in neon.

Since “Sorry to Bother You” opened wide last Friday a number of outlets have written about the “white voice,” mainly due to the stars providing them. Along with Cross, Patton Oswalt provides the voice for Cash’s fellow power called Mr. _____, played by Omari Hardwick.

Oswalt’s part in the film matters far less than Hardwick’s, however, particularly in the scenes Riley blocks and frames in a way that depicts Cash and  Mr. _____’s noticeable separateness from the white power players on their level. The “white voice” and everything it earns and costs Cash becomes even more apparent when he moves up RegalView’s elite sales level.

All “Power Callers” use their “white voices” at all times, employing them to sell instruments of destruction as well as cheap labor via WorryFree, a corporation whose workers sign lifetime contracts in exchange for the guarantee of three hots and a cot. And Cash's compensation for perpetuating this modern form of voluntary slavery is magnificent. His promotion enables him to pay off his debts, get a place of his own and replace his rust bucket with a new car.

It also puts him on the radar of WorryFree’s stimulant-loving maniac of a founder Steve Lift (Armie Hammer), who is all too eager to put this ambitious black man's talent and "white voice" to even more devious usage. Cash and  Mr. _____’s  “white voices” only attain a certain level of acceptance for them. We see this in an orgiastic party scene that purposefully shows the two men as surrounded and under siege, as if they're trapped in some sinister game of “Where’s Waldo?” Aiding in this is Hardwick’s costume; Mr. _____ wears a bowler hat and an eyepatch, like some Bond villain’s right-hand man, making him easy to find in a sea of white party goers. There's that, and the fact that he looks massively uncomfortable as the white guests cheer at a queasy minstrel show staged at Lift's insistence.

Riley examines the artistic definition of selling out too, showing it as the other side of the same coin. Detroit also has a "white voice," (that of Lily James), and she uses it to woo potential buyers at her art opening.  The implied understanding is that her British accent persuades potential patrons to take her art seriously, as opposed to viewing her as some weird black girl tossing mixed media shapes that resemble Africa onto a wall. She employs the voice throughout the performance piece that serves as the evening’s main event, which consists of her saying a few lines from Berry Gordy’s “The Last Dragon” over and over again. So, we get a black woman using a British accent while quoting film by a black director that appropriates Asian culture. How’s that for a mind freak?

Riley merges the many themes in “Sorry to Bother You" into an illustration of how desperately difficult it is to survive, let alone thrive, in capitalist structure bent on impoverishing the many for the benefit of so few. The “white voice” merely serves as a doorway to his loopy journey, and it's a slight caricature, a signifier of the contortions people of color, and black people specifically, have to engage in as a matter of survival in the corporate world at large and in Silicon Valley in particular.

It’s the unspoken requirement to relinquish a part of your identity in order to support yourself. And sorry, it’s not just a black thing — white people also use and benefit from putting on their “white voice.”

The difference is that those people stand to gain far more while sacrificing a lot less.

"No Ashes in the Fire" by Darnell Moore

Salk Talks with the author about black masculinity and memoir