How lasers became synonymous with cool

Not all fundamental physics discoveries retain their coolness for so long. Why do lasers continue to fascinate? 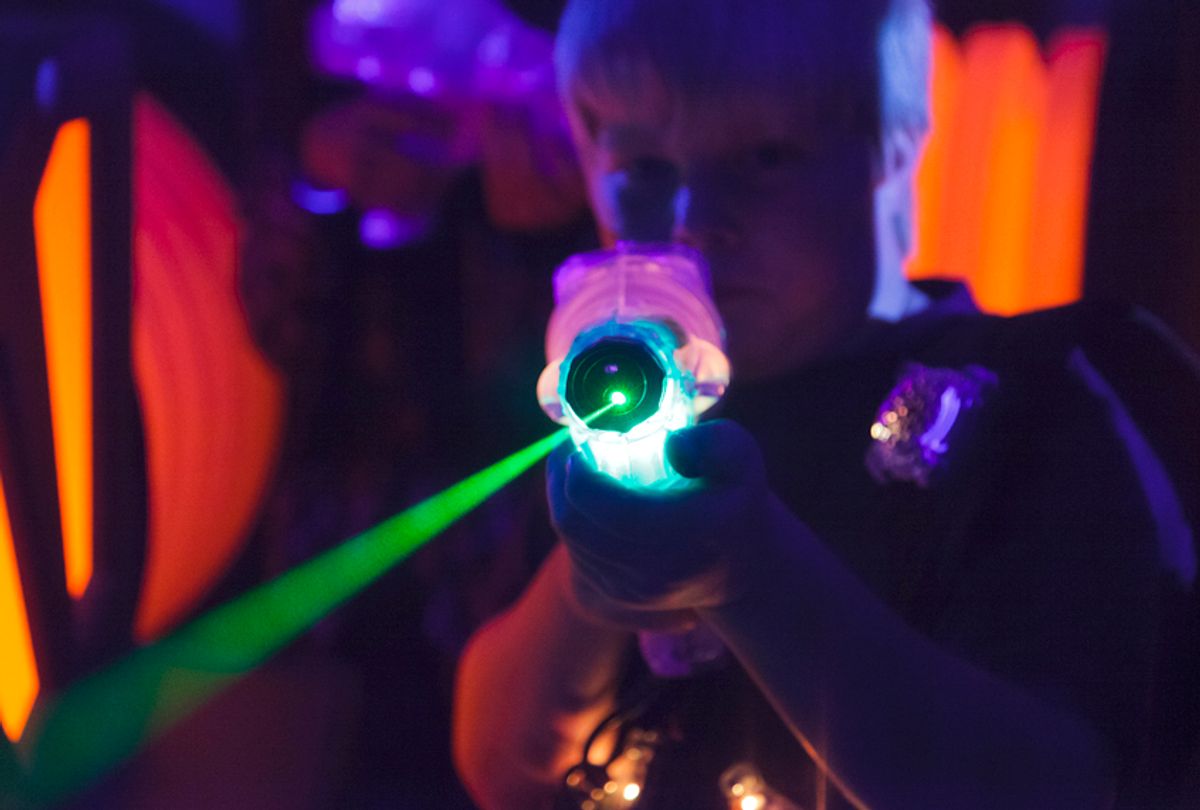 When God said, ‘Let there be light,’ he surely must have meant perfectly coherent light.

Promotional images of grinning, laser gun-toting teens playing laser tag and psychedelic advertisements for laser light shows all speak to how Western culture ubiquitously thinks lasers are cool. This is weirder than you might think; after all, not all fundamental physics discoveries are cool. Compare lasers to black holes — in concept, and in point of fact, black holes are cool. But black holes are not effortlessly cool in the way that lasers are, even if their physics fascinate us.

So how did one idea — a focused light beam — become so ubiquitous for cool? Is the lust for lasers inborn, or is it the result of culture?

Black holes may be cool to people who know about them. Lasers are cool to everybody. And understanding how they became synonymous with cool requires delving first into the physics.

Lasers throw out their magic beams via the process of optical amplification. (The name was originally an acronym: Light Amplification by Stimulated Emission of Radiation). An energy source feeds into a "gain medium." The gain medium is some substance with optical properties: maybe a gas, a solid, or a liquid. Inside a cavity, two mirrors bounce light back and forth many times, passing through the medium. One of the mirrors is a little transparent. After passing through the medium, a certain amount of light makes it through the transparent mirror, and lases out (yes, that’s a real verb).

The ancestor of the laser was the maser ("Microwave Amplification by Stimulated Emission of Radiation"), invented by Charles Townes and Arthur Schawlow in 1954. They suggested a visible laser could be invented, and in 1960, a man named Theodore Maiman built one. Initially, lasers were a demonstration of a property in physics; they weren’t invented with applications like laser tag or CD drives or bar code readers in mind. To that end, Maiman famously called lasers “a solution seeking a problem.”

There's some dispute about who got there first, since one of Townes' doctoral students, Gordon Gould, began work on an optical laser in 1958. Depending on who you ask, the laser had four fathers. To quote Science History: "There’s the guy who wrote down the initial idea, two other guys who got a patent for it, and then another guy who actually built the first laser."

Why lasers are so “cool”

For answers, I turned to a laser specialist, Ash Arianpour, an optical engineer and scientist living in San Diego. Arianpour got his doctorate in optical engineering at UC San Diego, and before that he was a laser test engineer. He graciously provided answers to a laser disciple (as I now style myself in all my private correspondence).

"Lasers are incredibly fascinating to the general public," Arianpour wrote, "because all other light sources (e.g., light bulbs, flashlights) diverge and diminish in brightness the further out it goes."

That was the core of the appeal. He suggested a thought experiment: "Imagine if you had a flashlight, and you pointed it at a far away tree. It would barely light up. But now, you take a laser and aim it at the same tree, and you can illuminate your target."

"It's rare for a source of light to have that ability to stay near the same size at its origin and at its destination, with the exception of a laser."

That was only part of the fascination. Arianpour went further: "Now, couple that effect will some really beautiful colors like cyan (488nm) or red (633nm), and it just increases how visually stimulating it is."

Such were the bare bones of lasers. We hadn't even gotten to the ubiquitous cultural layers of laser tech. "Now you can even up the excitement by applying it to gaming,” Arianpour said. “Lots of games are shooter based (e.g., ‘Call of Duty,’ ‘Gears of War,’ etc.) and having a laser sight on your target ensures that when you fire your weapon you will not miss."

Look at lasers from a scientific perspective, Arianpour said. "You can use lasers to stimulate molecules that biochemists attach to a strand of DNA in order to make them fluoresce at specific wavelengths, and then read out an individual's DNA. This information can then be used to determine if an individual has any inherent disease, to within some degree of probability, and now that same individual can take steps to delay or even prevent that disease from developing."

These powers extend to the heavens, too: "You can use lasers to light up the sky to create a false star for a telescope system to calibrate their optics and correct for the turbulence in the air, and capture images of these beautiful celestial bodies," he explained.

I mentioned my black hole paradox to Arianpour.

"If I had to guess," Arianpour told me, "it's because you can't capture a black hole. It can only be understood in abstract terms to most people (and even to some physicists, myself included), and it can't be held in your hand. You can't observe it every day. It doesn't help you accomplish your daily tasks, it doesn't have a novelty, and if you tried to shoot one at a tree, the tree would no longer exists and neither would you."

"Or the planet," Arianpour continued, "or the solar system for that matter."

I considered soberly how my lack of existence would keep me from being impressed ... and was duly humbled. "Big if true," I whispered to myself.

"So [lasers] are like a magic pointer," I eventually wrote to him, " ... We can push around DNA, carve into discs, reflect from the moon, and all of this can be put into a handheld pointer for a reasonable amount of money."

"More or less," Arianpour said. "The difference between a handheld laser and something used for high-tech use is similar to the difference between flying a Cessna vs flying Virgin's Galactic spaceship. Both are capable of flight and travel, but one will get you much further than the other."

It's exactly what meets the eye

As science writer Stephen Wik wrote, "The Laser is something very different from most other technical advances, most of which take many years to make a large impact on pop culture." It's hard to comprehend scientific breakthroughs, wrote Wik, "especially if its manifestation isn't easy to see." For example, the public wasn't moved by the closely related maser. But the laser was a hit from Day One. Unlike the maser, the laser had a visible manifestation. It could be photographed.

Most of all, the maser had no place to land in pop culture. But the invention of the laser was different, as the laser-makers had an advantage. His name was H.G. Wells.

Wik wrote, "there was a ready-made analogue that had been prominent in pop culture for decades—the Ray Gun."

The image of a directed-energy weapon was invented by Wells in the closing days of Victoria's reign. In 1897's "War of The Worlds," Wells writes of the Martians:

… in some way they are able to generate an intense heat in a chamber of practically absolute non-conductivity. This intense heat they project in a parallel beam against any object they choose, by means of a polished parabolic mirror of unknown composition, much as the parabolic mirror of a lighthouse projects a beam of light... it is certain that a beam of heat is the essence of the matter.

Decades of stories followed. The pulps spoke of a hand-fired weapon that arced like lighting; they told tales of beams of energy cutting through space and metal. Lasers landed on fertile cultural ground. A spot was waiting, and lasers filled it. Science fiction made real.

Maiman's original ruby laser had a flash-tube wrapped spirally around a pricey ruby core. His laser just looked right. The Technicolor B-movies of the Fifties, Wik wrote, "seemed to be setting up the public" for "the Dawn of the Laser."

What do Gort's eyes fire in "The Day the Earth Stood Still"? Tell me, what do the blasters in "Forbidden Planet" discharge? What fiendish weapon is preferred by the Martian callers in Pal's 1953 rendition of "War of the Worlds"?

In the real world, lasers are not ray guns. You have to focus a beam for a long while before it becomes effective. Lasers go in straight lines, unlike kinetic weapons and bombs, which can be fired over hills. Deadly lasers would require vast amounts of power. That means batteries that only ships, aircraft and stationary guns could use. As Wik points out, lasers are shown as being visible from the side, as being too powerful, as never needing cooling, making strange noises, and so on.

But these constraints only apply to this material world of meat and potatoes and PVC piping. In fiction, lasers could do anything. Does it matter that the laser in "Goldfinger" probably wouldn't have cut Bond in half?

Lasers equal hope. They imply a promise fulfilled. For once, lasers say, you get the future you asked for. Lasers deliver uncut high-octane scientific romance.

Oh, sure, real-world science got us to the moon and back. But the Florida rockets looked nothing like the covers of "Amazing Stories." The heroes of Apollo were dutiful, sober-minded military functionaries. They didn't look, or act, like Buck Rogers. Sure, I carry a bar of glass in my pocket that I can speak to. But Siri isn’t anything like HAL 9000: she’s barely tried to murder me.

The laser legitimately looks like what the pulp artists drew. It'd be as if we finally discovered extraterrestrial life, and our new visitors bore a striking similarity to Jeff Goldblum from "Earth Girls are Easy."

Our lasting cultural ecstasy over lasers springs from that single postwar moment, the culmination of countless matinees and pulp newsstands. Lasers are the perfect marriage between the promised and the delivered. Laser coolness emanates from that point like, well, a beam.

If we cannot know the full mysteries of light, or match its speed, perhaps we can bend it, shape it, keep it close to ourselves. We can borrow its power to understand atoms, distance, to shape our own eyes. Sure, we make lasers into weapons. But can you blame us? Even there, in our violent fantasies, there's a longing for beauty. Without hallways full of lasers, what would skilled infiltrators narrowly avoid?

The story of the laser beam starts in a lab, and end with you reading this piece. But the laser, like the light, and like the future it represents, goes on and on. Lasers are cool because they're the focused sun, a little piece of the world we were promised, and might still live in one day. As long as that focused light shines, so will we. Pew pew pew.