How low can Trump go?

He kidnaps babies, abuses women, admires white supremacists, conspires with Russians & still his base supports him 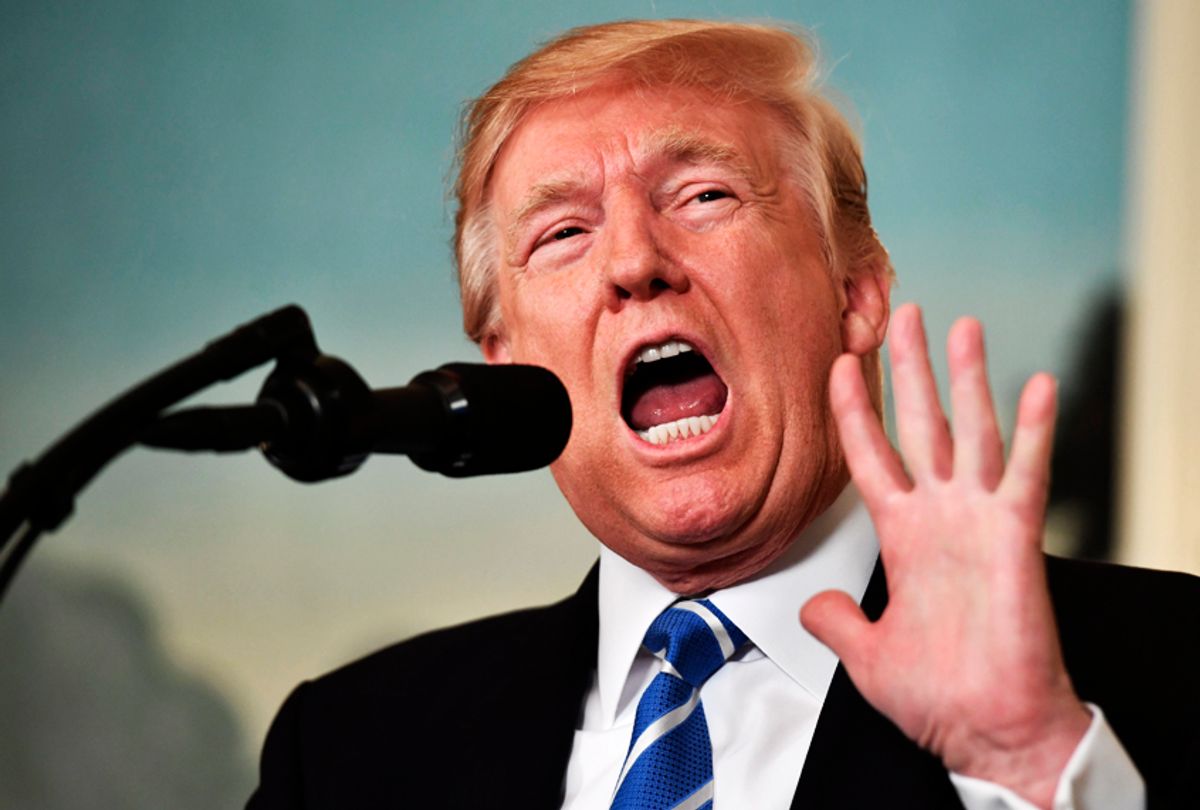 If you have wondered how much lower Trump could go,  we got our answer last Monday in Helsinki. There was the President of the United States surrendering his intelligence agencies, his Department of State and his Department of Justice to the lying, thieving, murdering dictator of Russia standing next to him on the stage. He was virtually admitting to the world that he owed his presidency to Vladimir Putin.

And if you wondered whether his base would follow him, the verdict is in. An Axios/Survey Monkey poll shows that 79 percent of Republican voters approve of the way Trump conducted himself in Helsinki. Nearly 70 percent of Republicans in a CBS poll felt the same way.
READ MORE: Donald Trump's startling global agenda: Taking white supremacy worldwide

The answer is, we haven’t reached bottom yet, and we have the reason: Trump’s base is with him all the way. Look at what he’s done over a period of two years without losing a single percentage point of support.

He admitted on tape to abusing women and grabbing them “by the pussy.” “They let you do it,” he bragged. “You can do anything.”

He spoke approvingly of neo-Nazis and white supremacists in Charlottesville after their torch-lit march supporting statues of Confederate generals. One of them killed a young woman by driving his car at high speed into a crowd at a demonstration, and Trump said there were “very fine people on both sides,” pointedly including the neo-Nazis.

He developed and instituted a policy on our border with Mexico whereby children as young as three months were seized from undocumented parents seeking asylum. He ordered them held in hastily constructed camps and temporary shelters including wire cages in former Walmart buildings.

He conducted a campaign for president that conspired with Russian nationals, including at least 12 agents working for Russian military intelligence, to steal the election of 2016.

He disparaged our longtime allies in NATO as “foes,” claimed that the media reporting on his trips to Brussels, Great Britain and Helsinki are “enemies of the people,” and at least temporarily seemed to have agreed with Vladimir Putin to turn over American citizens for questioning by Russian prosecutors.

He supported and signed a tax cut for billionaires that will saddle American taxpayers with a deficit of at least $1 trillion a year for the foreseeable future.

He tried to pass a law that would have canceled the Affordable Care Act, and having failed that, now supports changes to the law that would put people with pre-existing health conditions at risk of being able to get affordable health insurance.

He put in place trade policies that will cost hundreds of thousands if not millions of American jobs and raise prices for consumers.

All of this has been fine with the Trump base.

In fact, if you look closely at what Trump does every single day including weekends, he spends most of his time attending to his base, ensuring that his support among them doesn’t dip even a single point. He gives aid and comfort to the racists and xenophobes among them, telling lie after lie about immigration and crimes allegedly committed by undocumented immigrants. He demonizes Muslim-majority nations and criticizes the European Union for its immigration policies, not even bothering to dog-whistle his racist sentiments to make sure his base knows where he’s coming from.

“I just think it [immigration] is changing the culture, I think it is a very negative thing for Europe," Trump said at a press conference with British Prime Minister Theresa May. "I know it is politically not necessarily correct to say that, but I will say it and I will say it loud,” he bragged.

As the investigation of Special Counsel Robert Mueller closes in tighter and tighter on Trump’s inner circle and Trump himself, tending to his base is the key to Trump staying in office. A recent Washington Post poll showed that close to 50 percent of Republicans believe that Trump won the popular vote in 2016. He didn’t; Hillary Clinton received nearly 3 million more votes than Trump. Nearly 70 percent of Republicans believe Trump’s lie that millions of illegal immigrants voted in 2016, and nearly 75 percent believe that voter fraud occurs “somewhat or very often.” It doesn’t; numerous studies have found voter fraud to be close to nonexistent.

We’ve faced other moments in our history when our national decency was under threat. Nixon and Watergate, the last attempt by a presidential candidate to steal an election, comes immediately to mind. We coped alright with that. Nixon was impeached. In the words of the man who succeeded him as president, Gerald Ford, “our long national nightmare was over.”

But when will this country no longer be able to cope?

Every time you hear Trump tell his voters that the media “is the enemy of the people,” you’re listening to him conflate his own political security with national security. We’ve had enemies before. Nazi Germany and Japan and the rest of the Axis powers were our enemies. The Soviet Union was our enemy during the Cold War. Russia, with its aggression in Ukraine and Crimea, its saber-rattling in the Baltics, and its conspiracy to invade and disrupt our electoral processes in favor of Donald Trump in 2016, has succeeded the Soviet Union as an enemy of America.

“Much of our news media is indeed the enemy of the people and all of the Dems. . . ,” Trump tweeted from Air Force One on July 15 on his way to Helsinki. After his lickspittle performance with Putin at his so-called summit, he tweeted “The Summit with Russia was a great success, except with the real enemy of the people, the Fake News Media.”

What you’re hearing in those tweets is Trump preparing his base, and it’s time to ask what he’s preparing them for. What will he tell them to believe? What will Trump do? How low will Trump go?

I think Trump is preparing his base for his Mueller investigation endgame. This man is not going to be driven from office by either Congress or the courts. He’s going to fight, and fight to the death of democracy if necessary, because he has no loyalty to the Constitution or love of democracy. All he has is love of Trump.

He’s preparing his base for the day he fires Sessions, Rosenstein and Mueller. He’ll pardon every single American who has been charged or pled guilty, and then he’ll order the entire work product of the Mueller investigation to be collected and burned.

He’ll send his supporters into the streets to demonstrate in favor of firing Mueller and ending the investigation. When counter demonstrations hit the street, he’ll call them a threat to “national security” and start making arrests. He’ll begin with Antifa and Black Lives Matter, then he’ll move on to anyone found demonstrating on a street where violence or damage to property has taken place.

When the jails are loaded up, he’ll start putting arrestees in camps. They’re already practicing for this with the round-up, arrest and confinement of undocumented immigrants in concentration camps along the border.

If you thought we’d never see another round-up of people alleged to be a “threat to national security” the way we did with Japanese Americans during World War II, you were wrong. Our government is doing it right now. If you thought that disgraceful chapter in our nation’s history was more than enough to stop Americans from building concentration camps again, you were wrong.

American citizens working for the government and for private companies are following orders. They’re building camps. They’re stringing barbed wire. They’re making children march in line down makeshift “streets” between tents in these camps. They’re denying access to the camps to the news media, even to members of Congress. They’re doing it willingly. They’re doing it so efficiently that major private penal corporations are making hundreds of millions of dollars building camps and imprisoning immigrants.

When demonstrations break out against the round-ups and the camps between anti-Trump protestors and Trump supporters, he’ll declare martial law. He’ll declare that the Democratic Party is the “enemy of the people” and issue an executive order to postpone elections.

His base will support him all the way.

Let me put it to you this way: Trump’s robotic supporters on the right are fond of accusing Democrats and anti-Trump Republicans of suffering from “Trump derangement syndrome” because they oppose him.

READ MORE: You have been warned: “Trump Derangement Syndrome” will be a cudgel used to silence his critics