One of the most prestigious awards in the arts has been reserved exclusively for individuals, until now 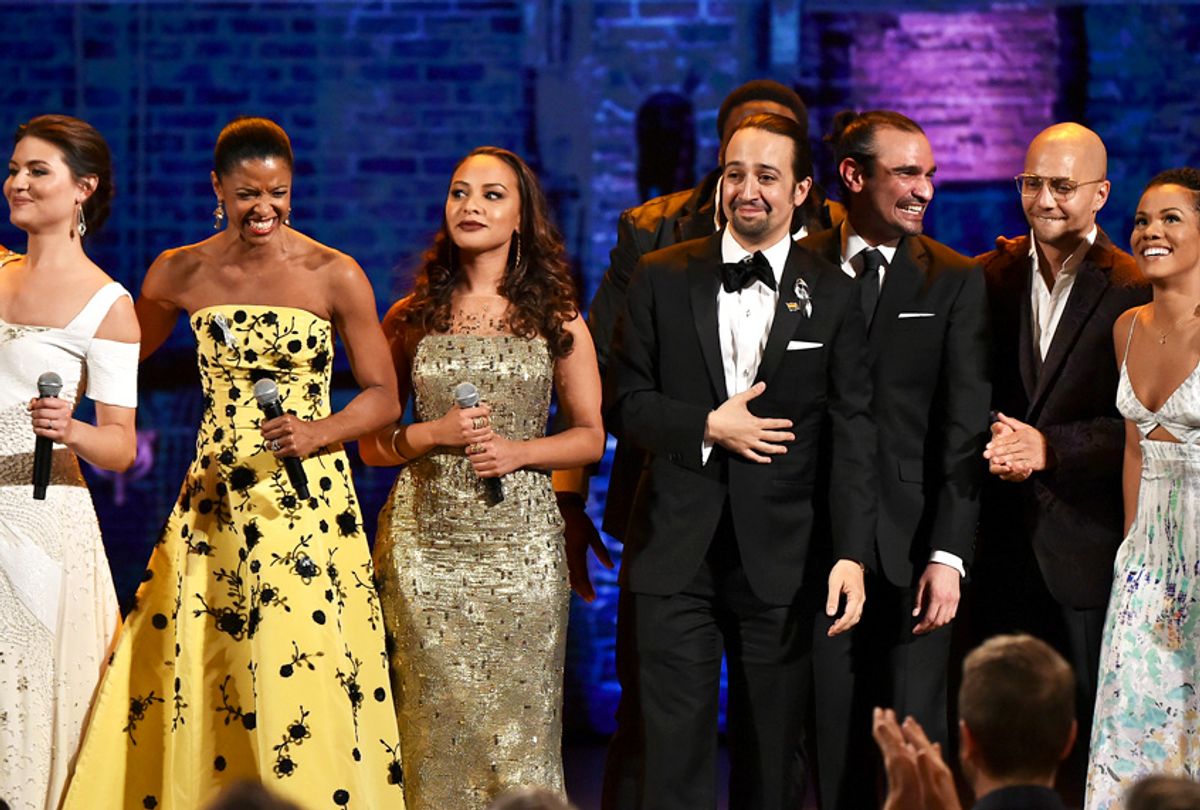 The cast of "Hamilton" (Getty/Theo Wargo)
--

Also, for the first time in the awards' 41-year history, the creators of a Broadway musical, the worldwide smash hit "Hamilton," will receive a special honor. The distinction has previously been given exclusively to individuals. The Kennedy Center website said this "unique" honor will recognize the "trailblazing creators of a transformative work that defies category."

"I believe that this is a work that has transformed how we think about using art to talk about who we are as a society," Deborah F. Rutter, president of the Kennedy Center, told the New York Times.

In a joint statement, writer and actor Lin-Manuel Miranda, director Thomas Kail, choreographer Andy Blankenbuehler, and music director Alex Lacamoire said: "The Kennedy Center Honors is the highest achievement an artist can receive. For the Board to break with its custom of honoring an individual and choosing instead to bestow this recognition on a single piece of work is humbling beyond our wildest expectations for our show."

Given the artists being honored this, many of whom are notably left-leaning, the big question is whether President Donald Trump will attend Trump and first lady Melania Trump's absence from last year's ceremony, marked just the fourth time a sitting president had skipped the Kennedy Center event since its founding. "The president and first lady have decided not to participate in this year’s activities to allow the honorees to celebrate without any political distraction," the White House statement said last year.

Stephanie Grisham, a spokesperson for Melania Trump, told the Times that it was too early to say whether the first couple would be in attendance. There is a clear political divide between the artists honored this year and the Trump administration.

Several of the artists recognized, like Cher and Glass, have openly criticized the president. As vice president-elect, Mike Pence was called out by the cast of "Hamilton" when he went to see the show shortly after the 2016 election.

Brandon Victor Dixon, the actor who played Vice President Aaron Burr in "Hamilton," addressed Pence as he was leaving the theater. "We, sir — we are the diverse America who are alarmed and anxious that your new administration will not protect us, our planet, our children, our parents, or defend us and uphold our inalienable rights," he said. "We truly hope that this show has inspired you to uphold our American values and to work on behalf of all of us."

Trump tweeted following the episode: "The cast and producers of Hamilton, which I hear is highly overrated, should immediately apologize to Mike Pence for their terrible behavior". In separate tweets about in the incident, he said that Pence was "harassed" by the "very rude" cast.

Rutter of the Kennedy Center told the Times that the recognition of "Hamilton" was not meant as a political statement. "When you have people of all backgrounds and races, age, socioeconomic differences and they all are moved by this work — this is a work of power and importance," she continued. "And I’m disappointed that Mr. Trump may not like it. But in fact, this is not a rebuke. This is about celebrating a powerful work of art and I will always stand by the power of the arts."

The annual celebration will take place Dec. 2 at the Kennedy Center Opera House in Washington. The ceremony will then air on CBS on Dec. 26, at 8 p.m. Eastern time.

“Blindspotting”: A complex look at gentrification