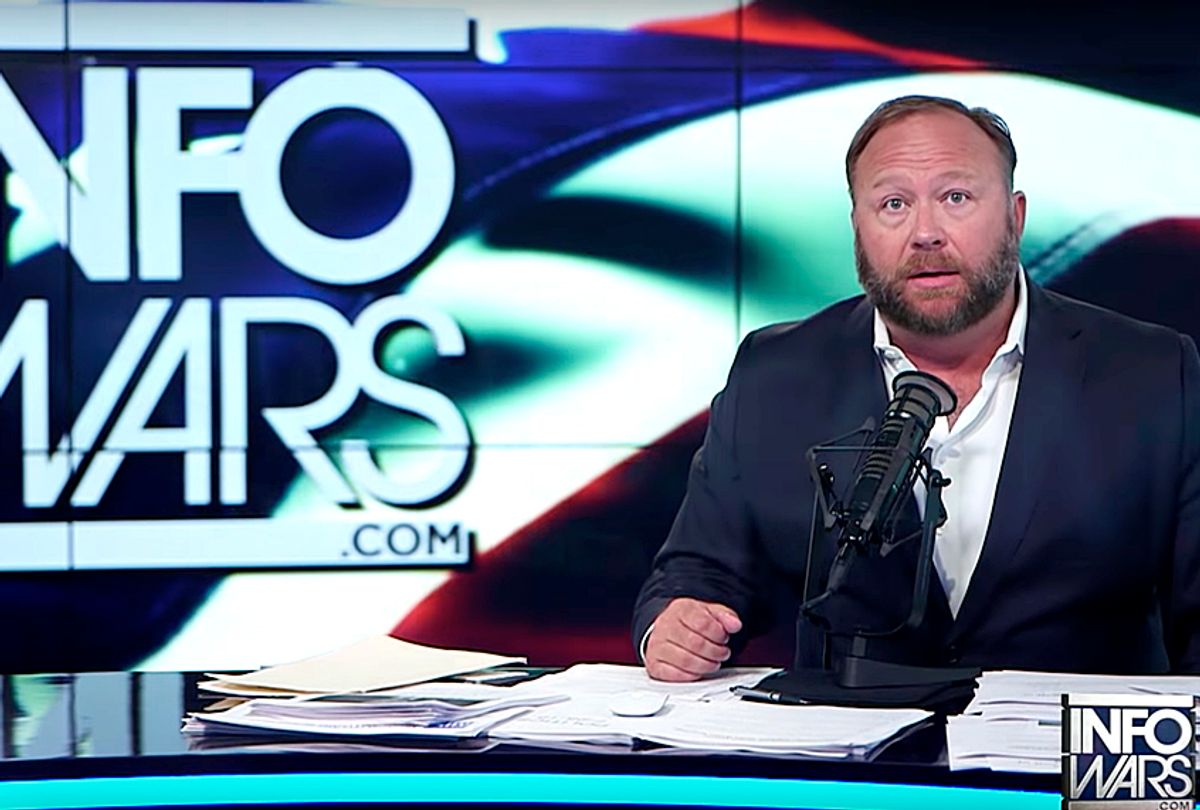 YouTube took down four InfoWars videos from conspiracy theorist Alex Jones’ channel — which has more than 2.4 million subscribers — Wednesday for violating its community guidelines. Two more strikes could result in Jones being barred from the video-sharing site — the main outlet by which InfoWars' distributes its videos.

Over on Facebook, the aggrieved right-wing media personality claimed that YouTube's move was an attempt to censor his conservative ideas.

“YouTube has removed four Infowars videos that were critical of liberalism, but you can watch the videos here and make up your own mind – instead of letting YouTube to do it for you,” Jones wrote in a post that linked to an article on Infowars about the removal.

According to NBC News, the removal of the videos was part of YouTube's effort to issue Infowars a symbolic "strike," following a "three strikes" policy that the video site has implemented. Per the company's policy, three strikes within a 90-day period would result in Jones being banned from the platform.

In February, the channel received a separate strike for a video that depicted the survivors of the Parkland school shooting as actors, according to CNN. Since that strike occurred more than 90 days ago, the site that is known for peddling conspiracy theories has a clean slate – making the most recent strike tally just one.

NBC News explained that two of the videos featured anti-Muslim messages, while another incited violence:

“Two of the videos featured anti-Muslim content, including one in which Jones claimed that Muslims had invaded Europe. Another was flagged for anti-transgender content in which Jones appeared to threaten transgender people. The fourth showed an adult man and a young boy engaged in a physical altercation under the title “How To Prevent Liberalism.””

“We have long-standing policies against child endangerment and hate speech. We apply our policies consistently according to the content in the videos – regardless of the speaker or the channel,” the company said in its statement to NBC. “We also have a clear three-strikes policy, and we terminate channels when they receive three strikes in three months.”

YouTube's move is notable because, according to NBC, it is the main distribution channel for video content created by InfoWars. It also comes as discussions around what tech companies should do regarding content and customers that incite hate and violence have reached a boiling point.

Recently, Facebook CEO Mark Zuckerberg said in a controversial interview with ReCode’s Kara Swisher that, although he found Holocaust denialism to be “deeply offensive," he thought “at the end of the day, I don't believe that our platform should take that down.”

When asked specifically about Infowars on its platform, Facebook has also said it does not “take down false news.”

"We work hard to find the right balance between encouraging free expression and promoting a safe and authentic community, and we believe that down-ranking inauthentic content strikes that balance," Facebook spokeswoman Lauren Svensson told CNN. "In other words, we allow people to post it as a form of expression, but we're not going to show it at the top of News Feed."

Facebook’s stance has received a lot of criticism as of late.