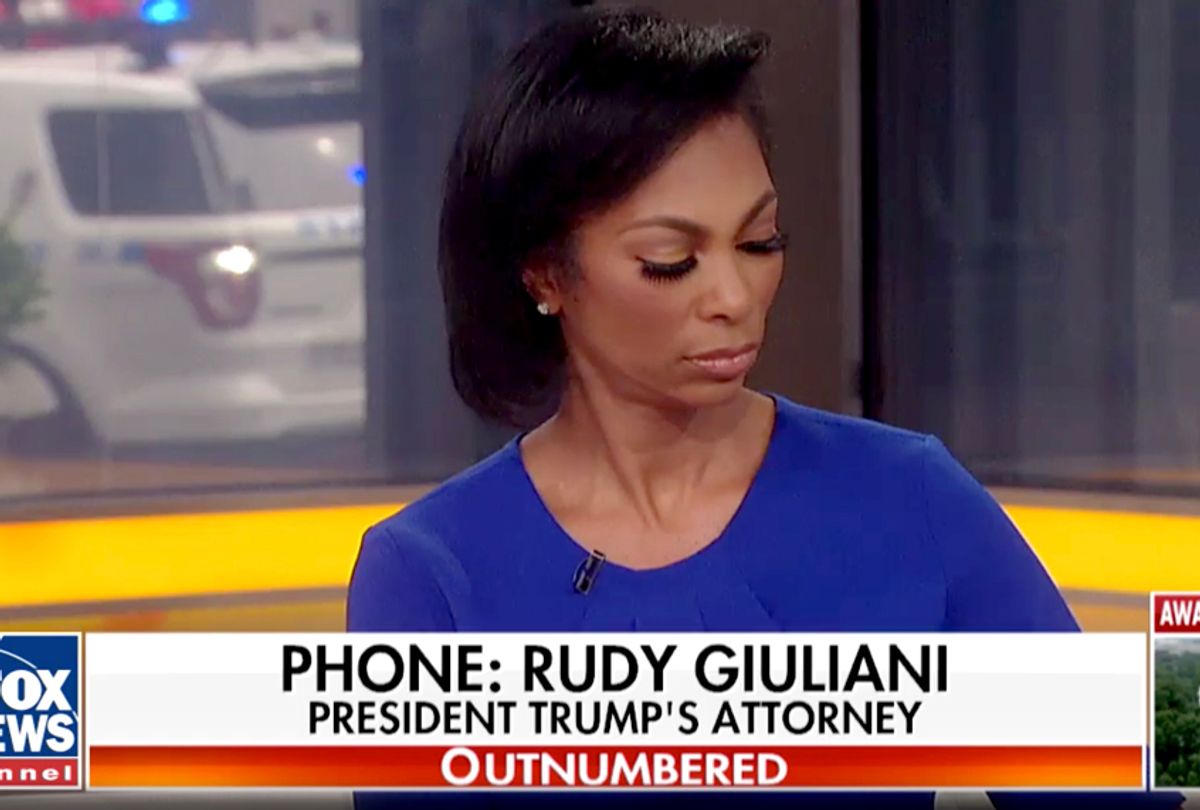 Providing legal representation to President Donald Trump is no doubt a thankless task, a fact that his lawyer Rudy Giuliani demonstrated on Monday as he made the cable news rounds trying to spin away the latest unflattering revelations about his commander-in-chief — most notably by arguing that even if Trump did hypothetically collude with the Russian government, that collusion would not be a crime.

During an appearance on "Fox & Friends" on Monday, Giuliani altered the narrative being spun by the Trump administration in two crucial ways. First, he shifted the administration's narrative from insisting that there was definitely no collusion to arguing that "I have been sitting here looking in the federal code trying to find collusion as a crime. Collusion is not a crime."

On another occasion during his "Fox & Friends" appearance, Giuliani seemed to imply that the Trump campaign team may have "colluded with themselves," although he didn't clarify what that meant.

"This is a theater of the absurd. The president's innocence, having done nothing wrong, has been proven over and over again. There is not a single stitch of evidence of collusion. He didn't have anything to do with Russians. He made no deals with the Russians. He didn't get elected because of Russians. They may have colluded with somebody else, or with themselves . . ." Giuliani told the co-hosts of "Fox & Friends."

Giuliani's second moving of the goalposts was in repeatedly pointing out that Trump did not attend the Trump Tower meeting in June 2016 when his top campaign advisers — including then-campaign manager Paul Manafort and his own son, Donald Trump Jr. — talked to a Kremlin-connected lawyer about obtaining "dirt" on Hillary Clinton. This is notable because no reputable media outlets ever claimed that Trump had personally attended the meeting, and the explosive revelation from Trump's former lawyer Michael Cohen wasn't that the president was there; it was his claim that the president had known about the meeting happening in advance.

"It's wild, crazy and they're out of their minds. He did not participate in any meeting about the Russia transaction," Giuliani proclaimed before being briefly interrupted by his co-hosts. "The president did not and the other people at the meeting that he claims that he had without the president about it say he was never there. And there are at least four separate witnesses who say that against a guy who has been kind of proven to be one of the biggest liars in America."

Giuliani also reiterated his disdain for the ongoing accusations that Trump had attempted to obstruct justice.

"The obstruction thing is crazy," Giuliani told the "Fox & Friends" co-hosts. "He had a right to fire Comey. That's what it's all about. He had a right to say to Comey, give Flynn a break. There was no investigation at the time. And not only that, he didn't tell him don't investigate him, don't prosecute him. He asked him to exercise his prosecutorial discretion because he was a good man with a great war record. I've been asked that as a prosecutor many times."

Giuliani reiterated his "collusion is not a crime" stance during an appearance on CNN on Monday.

"I don't even know if that's a crime — colluding with Russians. Hacking is the crime. The president didn't hack. He didn't pay for the hacking," Giuliani told CNN.

Former CBS news anchor Dan Rather came up with what is perhaps the best review of Giuliani's Monday morning performance.

Hours later, Giuliani called the Fox News program "Outnumbered" to try to backpedal from his series of gaffes after the co-hosts were unanimous in their criticism of Team Trump's sudden strategy shift.

"When I said today that there was no collusion and that collusion also is no crime, I’ve been saying that from the beginning, so did John Dowd. It’s a very very familiar lawyer’s argument that . . . in the alternative: My client didn’t do it, and even if he did it, it’s not a crime," Giuliani told "Outnumbered."

He added in a confusing and bizarre 25-minute phone appearance, "I have said that over and over again. Collusion is not a crime. The only crime here is hacking, and it’s ridiculous to think that the president hacked."

The denials come in clusters. That first burst in March, the day that then-FBI Director James B. Comey first acknowledged that the bureau was looking at any collusion between Trump’s campaign and Russian actors. Another in May, after Trump fired Comey (in part because of the “Russia thing,” he told NBC’s Lester Holt). A burst in July, after the New York Times reported that Donald Trump Jr. had agreed to a meeting with a Kremlin-linked lawyer after being promised “dirt” on Hillary Clinton. In October, when the indictment against former campaign chairman Paul Manafort was handed down. That big bubble of denials in late December, when the Times’s Michael Schmidt had an impromptu sit-down with the president at Mar-a-Lago.

Roger Stone talks to Salon about his ties to Russia.