What if Michael Cohen is telling the truth?: Rudy Giuliani scrambles to discredit Trump Tower report 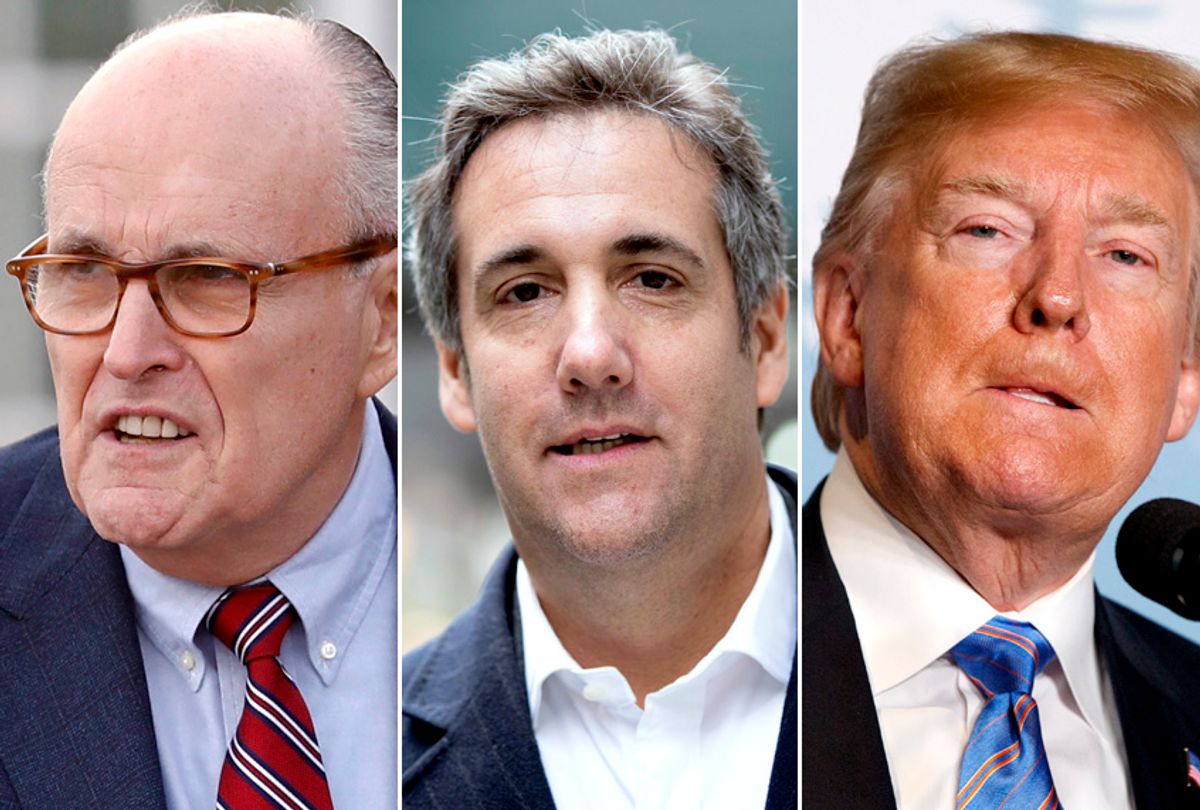 President Donald Trump still denials that he knew in advance about the infamous June 9, 2016, Trump Tower meeting between top campaign staffers — including the president's eldest son Donald Trump Jr., campaign chairman Paul Manafort, as well as the president's son-in-law Jared Kushner — and emissaries of the Russian government, even as his former longtime lawyer now says otherwise.

".....I did NOT know of the meeting with my son, Don jr," Trump tweeted on Friday morning.

Refusing to refer to his former personal attorney Michael Cohen by name, he added, "Sounds to me like someone is trying to make up stories in order to get himself out of an unrelated jam (Taxi cabs maybe?)." That is likely a reference to the ongoing investigation into Cohen's business practices relating to taxi medallions by federal prosecutors in New York.

Trump's heated tweets this morning come in response to reports published Thursday night that Cohen is willing to testify that Trump personally approved a meeting between his presidential campaign staff and Kremlin-connected officials. Cohen also alleges that he was there when Don Jr. informed Trump of a Russian offer to share dirt on then-presidential candidate Hillary Clinton and that others can corroborate his account.

In response to Thursday's bombshell report, Rudy Giuliani, Trump's new personal defense lawyer, launched a slew of personal attacks on Cohen, calling him a "pathological liar" and "an incredible liar, who has a tremendous motive to lie because he's got nothing to give."

"The tapes that we have demonstrate any number of very serious lies by him back a year and a half ago," Giuliani continued, referring to audio recordings between Cohen and Trump that make it clear that Trump was aware of an attempt to quash a report about his alleged affair with former Playboy model Karen McDougal. "There's no doubt in my mind that he's just not credible. I would not accept him in a case as a witness, as a prosecutor."

"This is the kind of witness that can really destroy your whole case, because any finder of fact loses confidence in the case when you rely on a guy like this," Giuliani said. "When you rely on a guy where, before you're finished with this, you're going to have such a string of lies you just can't trust him."

But in calling Cohen a liar, Giuliani may have increased Trump's legal woes by effectively indicating that Cohen had been lying for Trump while working for him. Cohen has worked as Trump's relentless "fixer" and defender for the past decade until a few months ago.

As Rep. Eric Swalwell, D-Calif., the top Democrat on the Subcommittee on the CIA, pointed out on Thursday, "Rudy Giuliani described [Cohen] as a proven liar but all of his lies in the past were on behalf of Donald Trump."

Trump and his legal team have consistently refuted the president's knowledge of the meeting.

During his closed-door testimony to the Senate Judiciary Committee, Trump Jr. told Congress that he didn't remember telling his father about the June 2016 Trump Tower meeting with Russians. He also said he could not recall what happened during the meeting at least 54 times.

Cohen's is the third Trump associate to indicate the president had more knowledge about the June 2016 Trump Tower meeting than he led on. His latest claim could implicate the president and Trump Jr., as it suggests he had not told Congress the entire truth — and may further expose him to perjury charges.

"The news reports suggest not only the possibility of obstruction on the president's part but the distinct crime of conspiracy to obstruct on the part of the group that discussed and finalized the misleading public account," Stephen Schulhofer, law professor, New York University told Vox. "If the necessary knowledge and intent are present, those who participated could be guilty of conspiracy to obstruct, and then the president himself could be guilty of additional crimes such as perjury or lying to the FBI committed by his co-conspirators in furtherance of the cover-up conspiracy."

In May, Giuliani told Business Insider he "would be surprised" if the president had been aware of the meeting at the time that it happened. He also left open the possibility that it slipped his mind.

Giuliani further ripped into Cohen in his Thursday interview, saying that he didn't "see how he [Cohen] has any credibility" because he secretly recorded a conversation between himself and Trump then released the tape.

The Thursday report of Cohen's claims is more evidence that Cohen is preparing to turn on Trump in the Mueller investigation, which could have ominous implications for the president and his legal team.

Discussing the Michael Cohen tapes, Michael Aveanatti, the attorney for adult film actress Stormy Daniels, told Salon that Michael Cohen should "do the right thing," and "release all of these tapes."

Jeff Ringel, director of the Soufan Group and a former FBI supervisor, joined “Salon Talks” to discuss what the implications are for Flynn, the former National Security Advisor to the Trump administration pleaded guilty on December 1st for lying to the FBI about policy conversations with the Russian Ambassador before Trump was sworn in as President.