Arkansas attorney general, a rising GOP star, has an unsavory email past 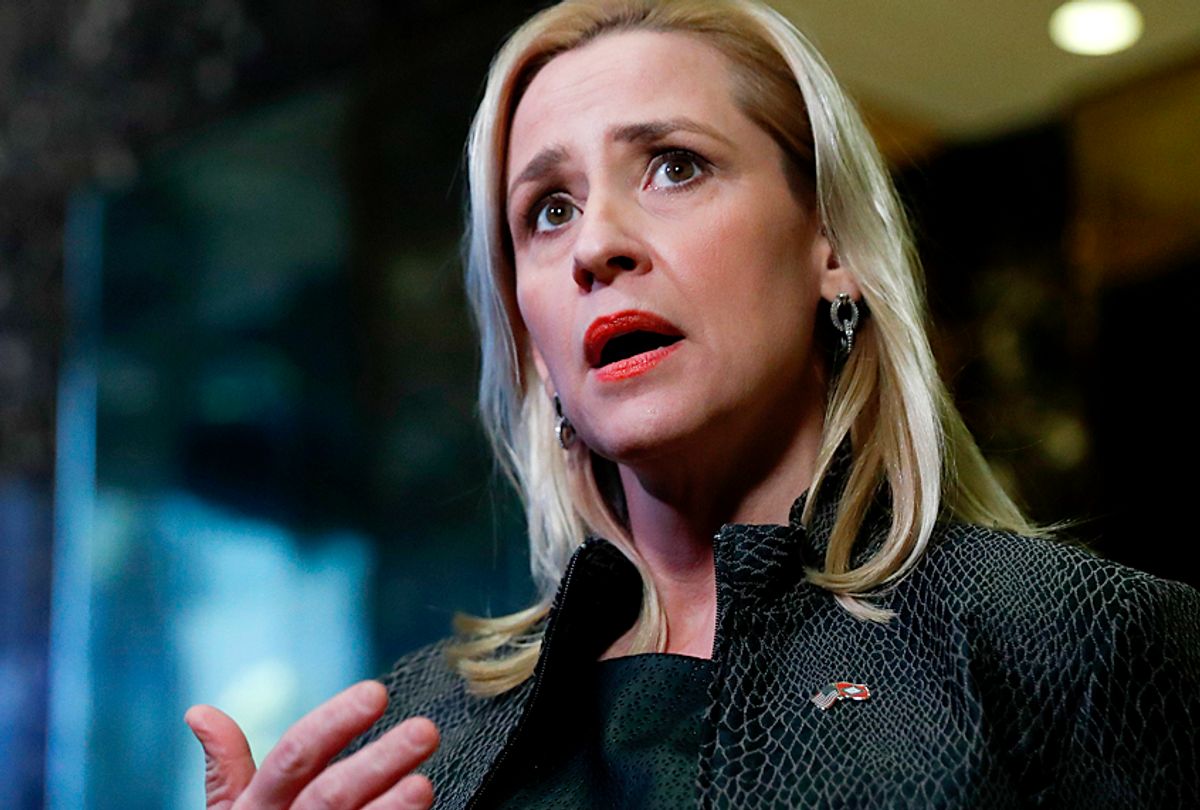 Leslie Rutledge, the attorney general of Arkansas, is a rising star in the Republican Party, especially under President Donald Trump. She gave a prime-time speech at the Republican National Convention in 2016, which she dedicated to bashing Hillary Clinton with conspiracy theories about the alleged evil deeds of the Clinton Foundation. Rutledge is currently head of the Republican Attorneys General Association and has been Arkansas attorney general for three years. (She is up for re-election this fall.)

Rutledge, who worked for former Gov. Mike Huckabee both in state government and on his presidential campaign, appears to be tight with the Huckabee family, who are immensely powerful in Arkansas. She praised her "friend," White House Press Secretary Sarah Huckabee Sanders (daughter of Mike Huckabee), calling her "an amazing and beautiful person inside and out."

But back in 2014, Rutledge's campaign to become attorney general was dogged by a racially-tinged scandal involving her work as an attorney for the Arkansas Department of Human Services. A local political blogger named Matt Campbell obtained a cache of Rutledge's DHS emails from 2007, which he told Salon was leaked to him by a whistleblower, and published them on his blog, Blue Hog Report.

Most of the emails are smarmy sex jokes or contain foul language, which was clearly embarrassing for a Republican with a wholesome image. But one stands out, in particular, for the racist content.

Rutledge apparently copy and pasted another email from "a friend of mine" who "works d'town with battered women" that purportedly tells a story about clients coming to her office. Rutledge's friend wrote it in a heavily stereotypical dialect that appears meant to mock the clients. Here is an excerpt:

De problem be wit his baby momma. Actually it turn out he not be de daddy (I saw the paternity test results) but he done been payin' chile suppote fo 5 year cuz Jesus done sent dat baby and it doan make no diffence who be de daddy iffn Jesus want him to be de daddy and take o' dat baby what nobody want 'cept him and his own mama.

The email goes on for five paragraphs in that vein, as the author writes that "baby's momma done turn into a ho and a stripper and she be raisin' fusses" and mocks a client's mother by writing, "we be getting de Gospel Punctuation from his mama: 'Hallelujah! Amen! Oh yes Jesus! Um hm!'"

Rutledge routinely introduces herself, as she did at the Republican National Convention two summers ago, as a "Christian, pro-life, gun-carrying conservative woman."

In another offensive email, Rutledge tells a joke about a "friend" who accidentally rear-ended a van and was surprised "when she discovered the other driver was a dwarf." When the man says, "I am not happy," Rutledge writes, her friend replied, "Well then, which one are you?"

These two emails were sent in August and October of 2007. Rutledge left Arkansas DHS in December of that year. After that, a note was added to her file accusing her of "gross misconduct" and instructing that she not be rehired. It is unclear whether the alleged misconduct was related to these emails or to other matters. Emails from Salon to Arkansas DHS asking for further clarification received no response.

Matt Campbell's release of these emails caused a kerfuffle in state politics in 2014, with the Arkansas Legislative Black Caucus holding a press conference to denounce Rutledge. The controversy received no national attention at the time. Since then, Rutledge's star has risen in the national Republican Party, and state attorneys general, particularly under Trump, have become more prominent in the national discourse.

In large part, that's because attorneys general in blue states have become a powerful check on the Trump administration, drawing national attention. Activism around police violence, led by Black Lives Matter, and the national debate on immigration policy have focused attention on how local and state law enforcement — including attorneys general — can dramatically shape the lives of racial minorities in a community.

“The attorney general of the state is supposed to be the people’s lawyer," Sean Rankin, executive director of the Democratic Attorneys General Association, told Salon. He said it was hard to "even conceive of writing or forwarding" an email "clearly attacking the people you’re meant to serve."

“The African-American community does not have a partner in Leslie Rutledge, not at all," said Mike Lee, a former consumer safety attorney who is Rutledge's Democratic opponent in the November election. He noted that Rutledge sent this email to four people she clearly believed would find it entertaining, saying, that "just tells volumes about her and about her associations."

Salon reached out to Rutledge's campaign and the Republican Attorneys General Association for comment but did not receive an answer. Rutledge did respond publicly when the emails were released in 2014, however, claiming there was nothing racist about them. "I've even had black individuals come up to me and say, 'Leslie, I read that and it sounds like country talk to me,'" she said.

She also emailed a statement to the local press at the time, claiming that she was a victim of "desperate attacks" and saying, "I find and found no humor in the email." She sent it along to others, she said, because the email's account of "domestic violence was similar to the sort of cases we dealt with every day in our efforts to protect Arkansas children."

"The shoot-the-messenger thing is [a] fairly standard Arkansas Republican response to anything that leaks out," blogger Matt Campbell told Salon.

The email in question, which can be read in entirety here, offers no obvious information about how to deal with domestic violence cases or how this one was resolved.

During her time in office, Rutledge's work has touched on many racially sensitive areas. She defended the state against claims that the Little Rock School District was targeted for school-board dissolution for racist reasons. In February, Rutledge spoke at the Conservative Political Action Conference, where she said that immigrants "seek to destroy our way of life" and compared Trump to the biblical figure of Nehemiah, who "was called to build that wall to protect the city."

Most significantly, Rutledge has been, as she promised during her 2014 campaign, vigorously defending Arkansas' voter ID law, even though there is no evidence such laws prevent voting fraud and plenty of evidence that they disproportionately prevent people of color from casting their ballots.

Despite her supposed concerns over voter fraud, Rutledge herself drew more bad press in 2014 when it emerged that she had been purged from the voter rolls in Arkansas after illegally casting an absentee ballot in the state in 2008, even though she had registered to vote in Washington, D.C., a few months earlier.

The Republican National Lawyers Association, which has aggressively pushed voter-roll purges and other vote-suppression measures, spoke out against Rutledge's de-registration at the time, even though she had committed a clear transgression by trying to vote in a state where she no longer lived and was not registered.

Campbell expressed frustration that his leaked emails "never managed to get that much traction" in 2014. But in the years since then, the election of Trump, fueled by a tidal wave of racial resentment, has put the spotlight on the role that bigotry plays in conservative politics. Unsurprisingly, Rutledge is a huge Trump supporter, who spoke on his behalf at the Republican convention and regularly sings his praises on social media.

Despite Rutledge's denials of racist intent, her support of Trump, whose own history of racist words and actions is well-documented, demonstrates that she has no problem avidly backing a bigot. If she thought that email was entertaining enough to copy five paragraphs and send it along to four friends, Arkansas voters may well wonder whether she holds attitudes that are not congruent with the demands of an office tasked with serving all residents, regardless of race.

D. Watkins: 5 ways to be a better cop