LeBron James to Don Lemon on CNN: Trump "used sports to divide us"

In an interview with Don Lemon, James spoke of his activism, Trump and a new public school he opened in Akron, Ohio 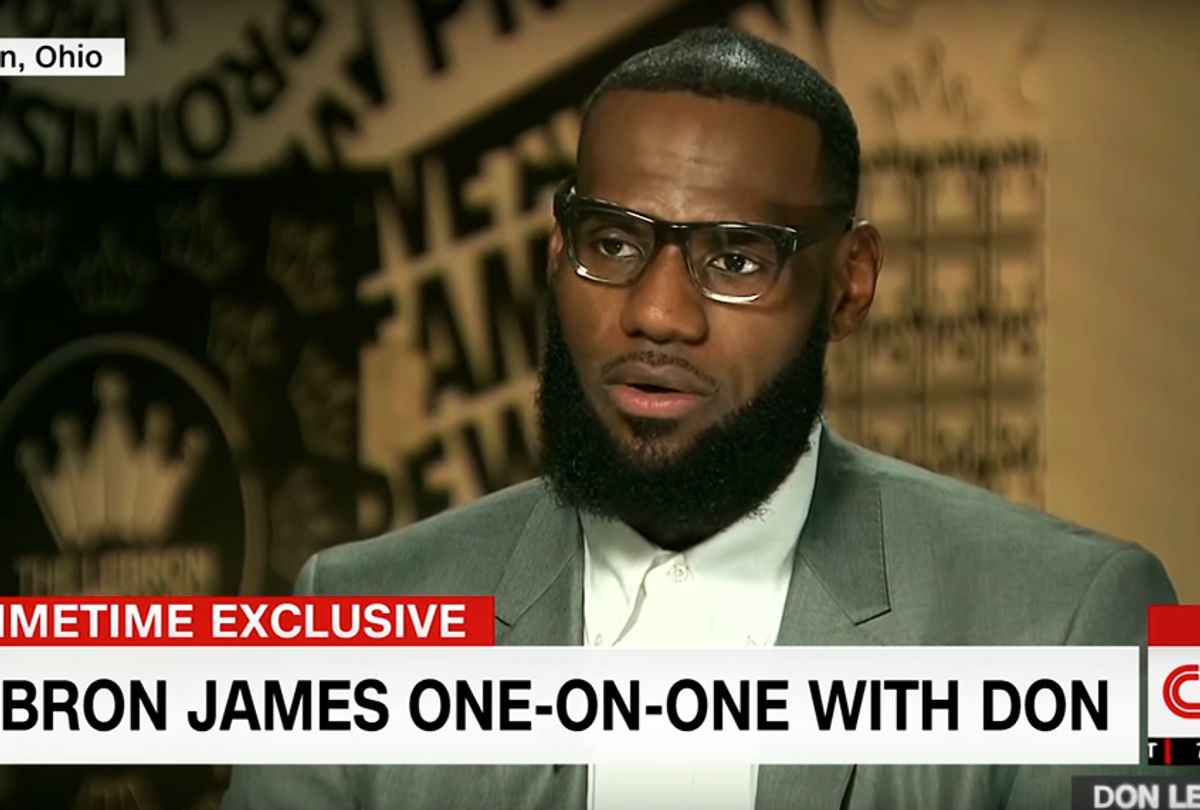 LeBron James appeared on CNN Monday night for an interview with anchor Don Lemon to discuss the public school he opened earlier that day in his hometown of Akron, Ohio.

"I am one of them," James told Lemon of why he wanted to open up the "I Promise" school for vulnerable kids who are struggling in either their studies or at home.

In his fourth grade year, he described himself as "This skinny kid from Akron who missed 83 days of school in the 4th grade [who] had big dreams," James wrote on Twitter Monday, where he expressed his excitement for the project, a collaboration with the Akron public school system.

"I'm truly excited and truly humbled and blessed that first of all the Akron public school system, my hometown, did this joint venture with us — allowed us to even make something like this possible," James told Lemon. "You can't get nowhere in life without help."

It's a lesson the basketball legend knows intimately. As the child of a single mom, he remembers the "everyday struggle" of surviving, he said, especially at the elementary school age and before he became a sports prodigy. James hopes the school, which provides free tuition, uniforms, transportation, daily breakfast, lunch and snacks, a bicycle and helmet to each student, guaranteed college tuition for every graduate, and an on-site food bank and GED and job placement services for parents, will provide a holistic support system for the children and families in Akron.

James told Lemon that because it serves a vulnerable population of students, they made the school day longer to keep students safe and to help close the gap between their students and their more privileged peers from other communities. "When they walk through that door, I hope they know that someone cares," James said.

Talking about the school and the value of education and sports provided a segue for James to discuss President Donald Trump and the current political climate. "I believe our president is trying to divide us," he said. "He is dividing us and what I noticed over the last few months is that he's kind of used sports to divide us."

Trump has weighed in on the NFL controversy over black players protesting racial injustice during the national anthem repeatedly, and even friend and supporter Jerry Jones said last week that he wished Trump would just leave it alone. The president has ripped into individual athletes and commentators like Jemele Hill over criticism of him and dis-invited teams to the White House after championship wins.

James says he thinks it's ironic that Trump uses sports to capitalize on racial divisions when sports has served as a bridge for so many people. "I know that sports was the first time I ever was around someone white. And I got an opportunity to see them and learn about them and they got an opportunity to learn about me," he said. "Sports has never been something that divides people, it's always been something that brings somebody together."

As vocal and active as James is now, he wasn't always that way. In the last five years or so, there's been a noticeable shift in James' public presence. He is a basketball star, yes, but also an activist.

"It starts with Trayvon Martin," James said of the tipping point in his life, "and the reason it starts with that, I believe, is because, having kids of my own, having boys of my own, it hit home for me to see and to learn the story and to think about if my boy left home and he never returned. That kind of hit a switch for me. And from that point on, my voice and my platform had to be used for more than just sports."

James has been especially outspoken about the marginalization of people of color, which success or wealth doesn't necessarily or entirely neutralize. "When you're an African-American kid, man or female, you're always going to be going against obstacles," he said.

Last year, James' Los Angeles home was vandalized, the "N-word" spray-painted across his gate. "It was so many different emotions," he said of that experience. "More importantly, it was the conversation that I had to have with my boys. That hurt me. But at the same time, it also enlightened me. . . being an African-American in America is always tough and they always going to let you know that you are the 'N-word.'"

And if James could face the president, Lemon wanted to know, what would he say? "I would never sit across from him," he replied.