Donald Trump vs. the Koch brothers: A major rift — or a stunt staged by Steve Bannon?

Steve Bannon is back, almost — and is likely pulling Trump's strings in his supposed feud with the Koch brothers 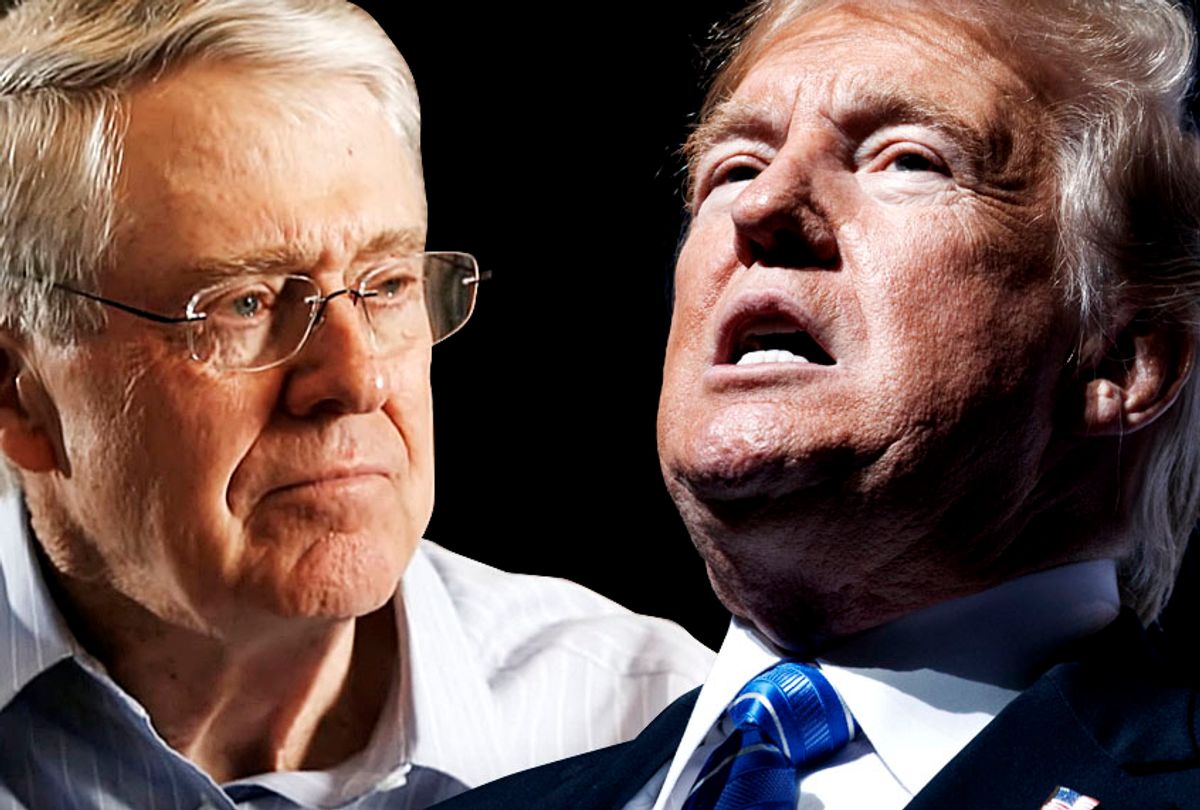 The last we heard of Trump's former "populist" muse Steve Bannon, he was across the Atlantic, plotting with Britain's recently departed foreign secretary Boris Johnson about plans to challenge Prime Minister Theresa May and enact a "hard Brexit" plan. He's turned up all over Europe the last few months, talking up far-right politicians and lending his support to anti-immigrant platforms. He's even started an official nationalist movement which he's cleverly called "The Movement."

Bannon's just following through on what many of us assumed was his long-term goal after Donald Trump's likely defeat in the 2016 presidential election. When Bannon and his team unexpectedly pulled off the win, he was elevated to one of the most powerful jobs on earth and then, months later, was banished for speaking out of turn about the president. That has not stopped him from pursuing his own agenda, which is global "disruption" on a grand scale to usher in the "Fourth Turning," described by the authors of the book that dramatically shaped Bannon's thinking this way:

Sometime before the year 2025, America will pass through a great gate in history, one commensurate with the American Revolution, Civil War, and twin emergencies of the Great Depression and World War II. The risk of catastrophe will be high. The nation could erupt into insurrection or civil violence, crack up geographically, or succumb to authoritarian rule.

That sounds a bit like the premonition of a doomsday cult, but Bannon thinks it's a good thing. The political movement he sees as the instrument of this necessary destruction is right-wing white nationalism, which is an emerging force in Western Europe and already has a foothold in the rest of the world. He's been over in Europe learning from these emerging political forces, and let's just say they have a long and relevant history from which to take lessons.

Now Bannon's back home, road-testing a bunch of new ideas and sharpening up the old ones. According to Gabriel Sherman of Vanity Fair, he's slowly worming his way back into favor by running an informal outside advisory group consisting of Trump campaign veterans who still have the president's ear. Unsurprisingly, he's recommending a scorched-earth strategy focusing on bringing out the Trump base to save their hero from the threat of impeachment. He has named Sens. Kirsten Gillibrand, Elizabeth Warren and Kamala Harris, along with (inexplicably) former Starbucks CEO Howard Schultz, as the targets for Trump's ire. Oh, and also Nancy Pelosi, whom Bannon notes is as close as they can get to Hillary Clinton.

This week Bannon found a different enemy: the Koch brothers, who have expressed consternation at Trump's trade war and immigration policies, which do not mesh with their laissez-faire, libertarian philosophy. At the annual gathering of Koch donors, Charles Koch said they may hold back support from some Republican candidates who back the president's policies.

As Salon's Matthew Rozsa reported on Tuesday, Bannon responded angrily, saying: "What they have to do is shut up and get with the program, OK? And here’s the program: Ground game to support Trump’s presidency and program; victory on Nov. 6." Later, on CNBC, he warned Republican candidates:

That threat came on the heels of a couple of presidential tweets earlier in the day. Note the word "globalist," which is not a term Trump has often used but is a major Bannon epithet:

Trump is lying as usual. The Kochs were hugely responsible for Trump and other Republican victories in 2016, even if they had to hold their noses to do it. As Adele Stan pointed out in the American Prospect two years ago:

If you’re a politician in the brothers’ orbit, you’re likely dependent on the ground operation of Americans for Prosperity — or other Koch astroturf outfits, such as Libre Initiative or 60 Plus — to get your voters to the polls. If you’re an employee of any of the multitudes of Koch­-linked organizations that dot the Republican landscape, you’re dependent on them for your paycheck. And if you’re the Koch brothers, seeking to hold onto your congressional majority, you’re dependent on your people seeing to it that Republican voters are not so turned off by Donald Trump that they fail to show up to vote for your favored candidate for either the House or the Senate.

The Koch brothers' operation is the Republican turnout operation, and Steve Bannon knows it.

Bannon's threats are based on nothing but hot air, as far as we know. But it sounds as though Trump is truly miffed by the Kochs' unwillingness to toe his line, and Bannon sees bashing them as a good cover for Trump's crude anti-immigration, white-nationalist policies. After all, Trump's populism so far consists of a massive tax cut for the wealthiest Americans (with another one potentially on the way), along with an incoherent trade war that even his supporters are struggling to understand. Maybe hitting some vastly wealthy Republicans could be just the ticket to get the MAGA crowd out to the polls.

It's hard to believe that the Kochs will actually pull the plug on Republican candidates in more than a small handful of races. They don't like Trump and never did, but they know their interests will not be as well served by Democrats. Indeed, this whole thing may be nothing more than Kabuki theater, designed to give Trump some rich guys to "feud" with. Meanwhile, the rich guys can pretend to care about their principles even as their mountains of cash keep piling up from Republican tax cuts.

Steve Bannon's goals, however, are not identical with Republican goals, Donald Trump's goals or the Koch brothers' goals. He wants to blow up the system altogether. Any kind of dissension and disorientation works toward that end, no matter who comes out on top. With the help of some foreign actors and right-wing media, along with the walking disaster that is President Donald J. Trump, his plan is working out pretty well.

How to battle Trump's fascist movement