Grandmother protesting President Trump tells Salon: "Aging may have slowed me down, but it hasn’t shut me up" 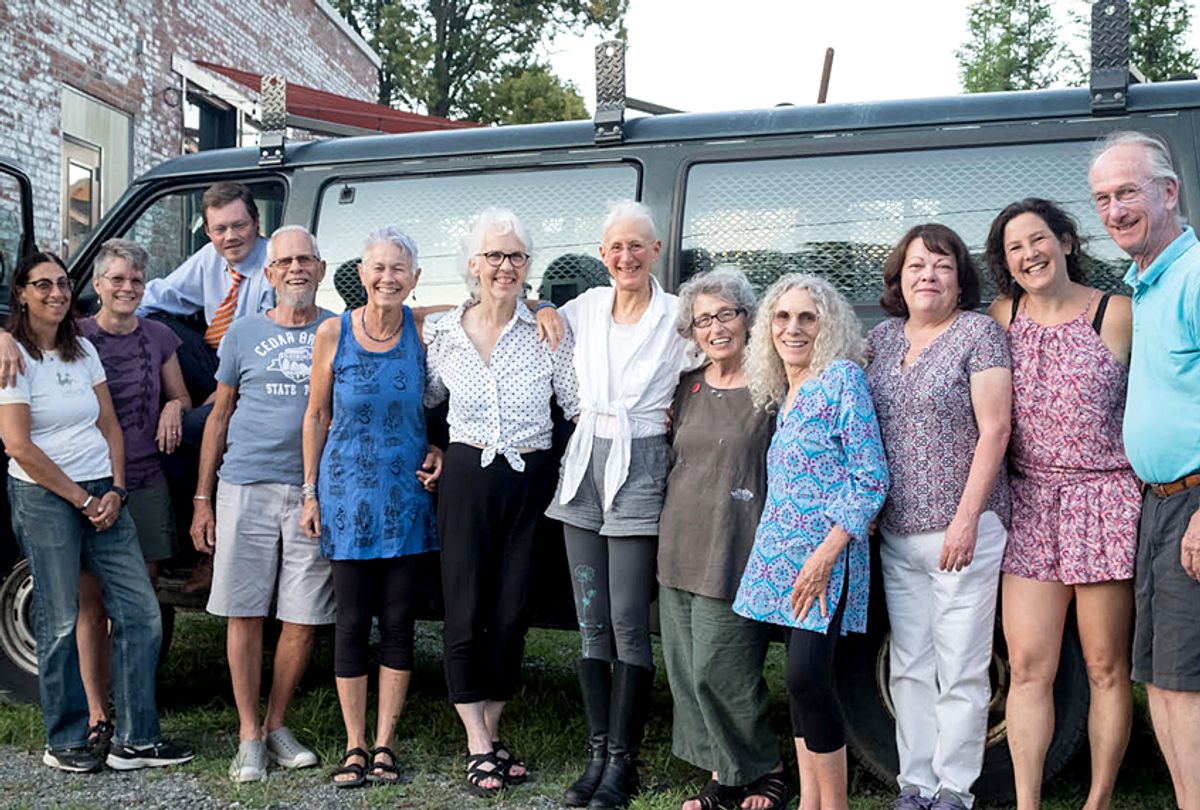 Hundreds of grannies are putting their bodies on the line and their lives on hold, as they embark on a six-day journey to the U.S.-Mexico border to protest the Trump administration's treatment of migrating children and families.

The group, Grannies Respond, was launched several weeks ago in Beacon, New York in the wake of recent news reports of children being ripped away from their families at the U.S.-Mexico border and sent to detention centers. The growing group quickly organized on social media and launched a massive road-trip that includes "some real grannies, some senior citizens who don't have children and then young people who are on the periphery," member Claire Nelson, 66, told Salon. The oldest traveler is 74-years-old.

Nelson, who is now retired, previously worked as a special education coordinator for pre-school aged children. She said that Granny Ride is an extension of her previous work of "advocating for children and their rights."

"When I read about what is happening with children being separated from their families and put out to detention centers it really disturbed me," she said. "I was very upset by that, knowing not only that everyone is scared coming here but also the effect that this would have on children, being separated from their caregivers for such a long time, not only emotionally but also intellectually."

She will be traveling to the border with her husband, Barry, who is 70 years old. They have five grandchildren. 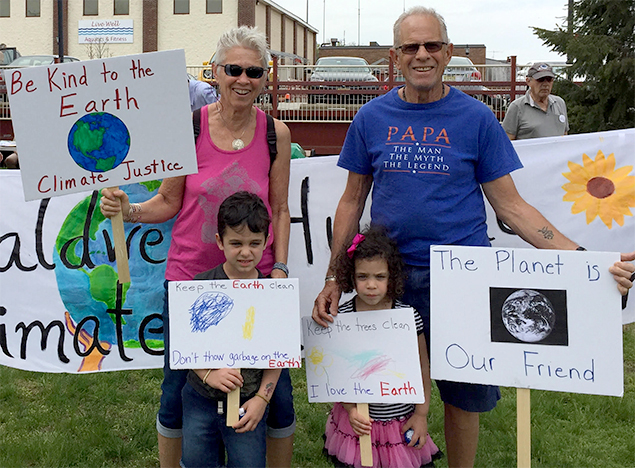 Claire and Barry Nelson at a local climate demonstration with their grandchildren.

On Tuesday, one "Granny Caravan" departed from New York City to McAllen, Texas, where conditions for migrant children have been reported to be especially horrifying. Photos from one Immigration and Customs (ICE) detention center in McAllen show children being held in cages, and others have been compared to jails.

A recent ProPublica investigation found that, in the past five weeks, police have responded to at least 125 calls reporting sex offenses at shelters that house immigrant children. The investigative publication obtained police reports and call logs from more than two-thirds of youth immigrant shelters run and or contracted by the U.S. Health and Human Services Department Office of Refugee Resettlement, which span 17 states and serve around 10,000 immigrant youth.

The "Granny Ride" is "rooted in the action itself," lead organizer Dan Aymar-Blair told Salon. He explained that Grannies Respond, the newly formed grassroots group in conjunction with Veterans Service Corps and Lawyer Moms of America, is "looking to reach like-hearted people and to take this from being a political discussion and from a discussion about the technicalities of law" to one that highlights how "we're losing our humanity by doing this (separating migrant children form their parents and sending them to detention centers)."

"To the grannies, it's always been about basic decency. It' about common sense. You don't put children in cages," he added.

While he's not a grandparent himself, Aymar-Blair, 43, who is the Executive Director of Article 20 Net, an organization that promotes the right of people to peacefully protest, was inspired to launch Granny Ride by his work on freedom of assembly. He also feels tied to the issue as a father.

"My connection to this issue is very much driven by imagining my children being in the same circumstances," he explained. "There are kids the age my children who are impacted right now." 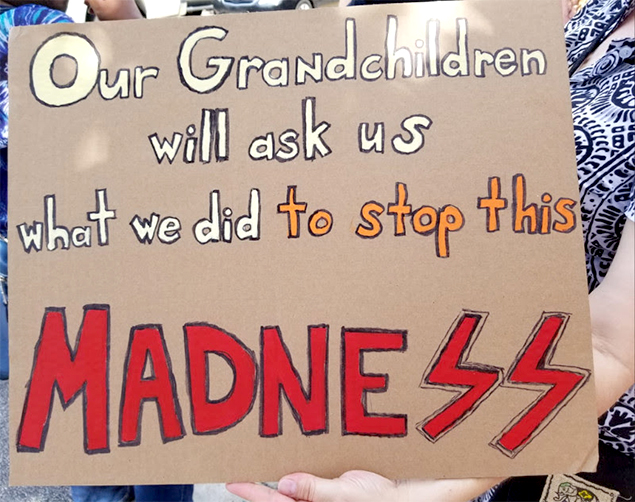 Along the way, the Grannies will stop in a half dozen places across the country, including Reading, PA; Pittsburg, PA; Louisville, KY; Montgomery, AL; New Orleans, LA; and Houston, TX, where they will hold rallies, sing songs of protest and attempt to inspire all children, regardless of nationality or immigration status, while demanding the reunification and release of detained children and families.

Additional caravans from Florida, Oregon, Texas and Wisconsin will be joining the New York convoy in McAllen, Texas.

"This is a very concrete way of responding to a horrible situation that’s taking place in this country," Barry Nelson, Claire's husband, told Salon. "It gives us something that we can actually do — to get on a bus, to ride across the country, to make a statement about how we feel about this."

Grandparents are "people that have some wisdom and patience," Nelson continued. "To really stand up for what we believe, that’s very concrete."

Since May, more than 2,000 migrant children have been ripped from their parents and placed in detention centers after crossing the Southern U.S. border, according to the Department of Homeland Security, as part of the Trump administration's "zero-tolerance" policy that has prompted widespread outcry.

In June, President Donald Trump signed an executive order reversing his policy of separating families, and replacing it with a policy of detaining entire families together, including children, for an indefinite period.

Trump's order doesn't address the predicament of the more than 2,300 children who have already been separated from their parents under his "zero-tolerance" policy. Federal officials initially said those children would not be immediately reunited with their families while the adults remain in federal custody for their immigration proceedings.

And while the government has so far reunited 1,442 families with children aged 5 and older by a court-ordered mandated deadline, according to the Washington Post, hundreds of separated children remain away from their parents, without a clear indication of when they would be reunited.

One grandmother, Tina Bernstein, 64, told Salon the recent media reports about the hundreds of immigrant children in custody have been giving her nightmares.

"When this all started, it was just unimaginable to me and I started having very unsettling dreams," she said. Bernstein links her dreams to memories of hearing about the Birmingham Bombings and the Cuban Missile Crisis as a child.

For her, traveling to the border "is not just an emotional response." It's a way for her to fight for the freedoms of other people, including her three-year-old granddaughter's. 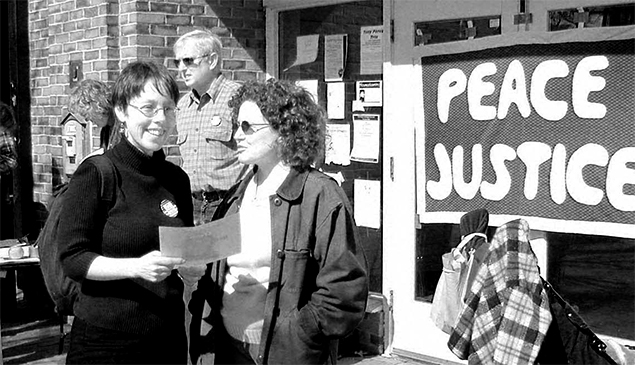 Tina Bernstein at a demonstration during the early days of the Iraq war.

While Bernstein said she doesn't imagine that the caravan is going to lead to major policy change, it's significant. "It's the idea of building upon building … we have a long road ahead, and we have to work together."

She added that while, "sitting on a bus and driving 2,000 miles isn't exactly what you want to do a you get older, for many of us, it's important to say, 'We understand how awful this is and we can't imagine this happening to our families.'"

Aymar-Blair also discussed the difficult nature of the trip. He said that while it's going to be emotional, "there's going to be a lot joy and a lot of hope."

For other grannies, the trip is about fighting for the rights of migrant children and their families while highlighting that "Grannies can have a say, even though we are part of the older population," Claire Nelson said.

"We can continue to be activists," Nelson said. "Aging may have slowed me down, but it hasn't shut me up. That's true for a lot of us."