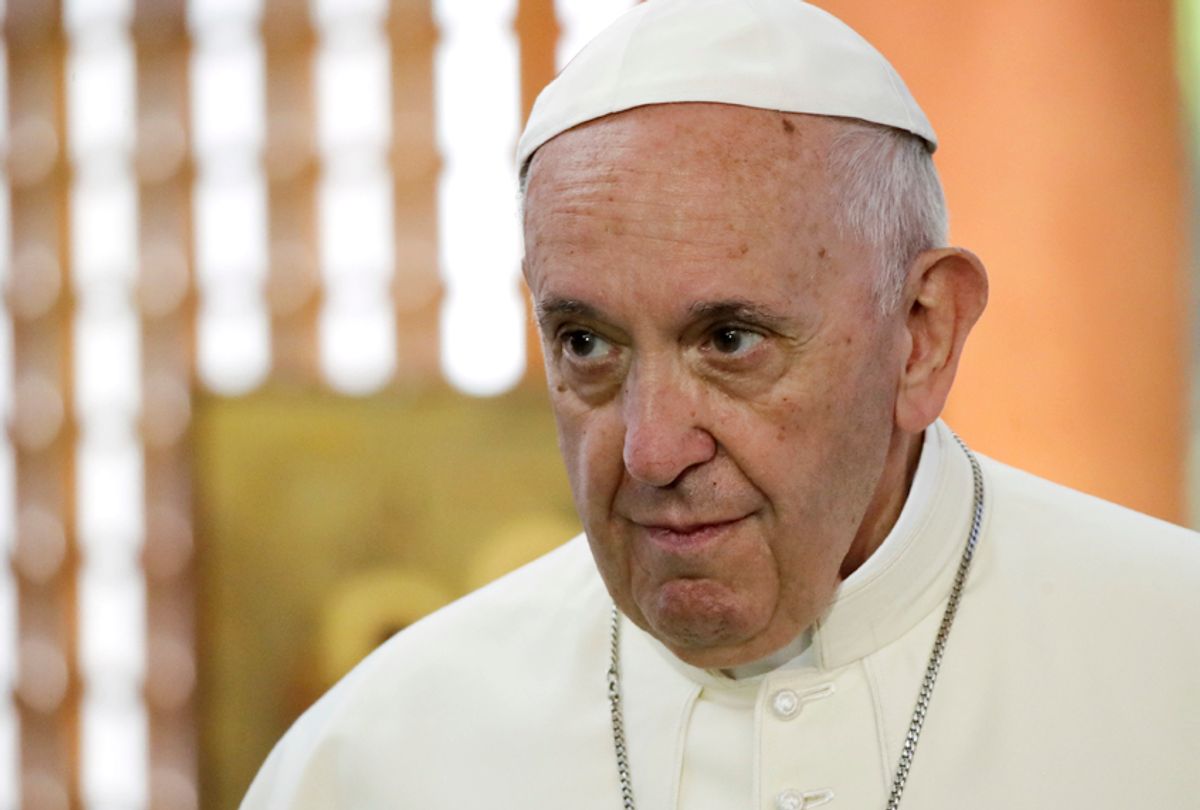 After declaring that the death penalty is "inadmissible" in all cases, Pope Francis has formally added opposition to capital punishment to the Roman Catholic Church's official catechism.

Technically, this is only a minor adjustment in Catholic doctrine: The church has long argued that capital punishment was acceptable only in rare and exceptional circumstances. But the ramifications in terms of the pope's positioning of the church on the political and cultural landscape could be far-reaching.

On Thursday the Vatican formally announced that the church's stance against capital punishment was now absolute, and that henceforward it will teach that execution is never a justifiable punishment for any crimes under any circumstances, according to a report by CNN. The Vatican also said it would work to abolish the death penalty everywhere in the world, a decision that may well pose a particular conundrum for American Catholics.

Twenty-three executions occurred in the United States in 2017 alone, according to Amnesty International.

For the 9th consecutive year, the USA remained the only country to carry out executions in the region.

The number of executions (23) and death sentences (41)  in the USA slightly increased compared to 2016, but remained within historically low trends of recent years. For the second year in a row, and the second time since 2006, the USA did not feature among the top five global executioners, with its position in the global ranking dropping from 7th to 8th.

President Donald Trump has actually proposed expanding the application of capital punishment, although that idea is not likely to be popular outside his base. In March, Trump told an audience in New Hampshire that he wanted to introduce the death penalty for certain types of drug offenses, arguing that "if we don't get tough on the drug dealers, we are wasting our time. And that toughness includes the death penalty," according to CNN.

He later added that drug dealers "will kill thousands of people during their lifetime" and argued that "this is about winning a very, very tough problem and if we don't get very tough on these dealers, it is not going to happen, folks."

It is unclear whether or how attitudes among American Catholics will be impacted by the Vatican's firm stance. The church's new position holds that "the death penalty is inadmissible because it is an attack on the inviolability and dignity of the person" and states that the church will "work with determination towards its abolition worldwide."

Although previous pontiffs, including John Paul II and Benedict XVI, have condemned the death penalty, Francis has taken it to a new level — a decision that Vatican spokesman Greg Burke told CNN that Vatican watchers should not find surprising.

"It was expected for a long time, starting with John Paul II. He had a document, 'The Gospel of Life,' in which he said ... the conditions [that] were once considered OK for allowing the death penalty have basically disappeared," Burke explained.

He added, "The key point here is really human dignity. The pope is saying that no matter how grievous the crime, someone never loses his or her human dignity. One of the rationales for the death penalty in Catholic teachings historically was to protect society. Obviously, the state still has that obligation. That is not being taken away here, but they can do that in other ways."

Emma Green of the Atlantic praised the pope's decision, noting that it was consistent with his larger effort to modernize Catholic teachings while connecting them with the church's ancient philosophical precepts:

This is a controversial position within an institution that has often declared itself a bulwark against the moral relativism of modern times. Even when Francis has clearly desired to change Church teachings on various subjects, he has framed these changes as continuous with past teachings, and has had to navigate dramatic internal Church politics along the way.

The new Catholic teaching on the death penalty underscores the Church’s commitment to the preservation of life. But it’s also a case study in how the Church can choose to change to meet the moral demands of modern times.

This isn't to say that there aren't other potential reasons why Pope Francis has decided to shift attention toward the death penalty at this particular time. The clerical sexual sex abuse scandal that has plagued the Catholic Church for decades has not gone away during Francis' papacy, with new reports revealing cover-ups of priests' behavior and accusations against archbishops and cardinals, according to The Guardian.

Two members of the pope's C9 group of cardinal advisers have been involved in these scandals, according to La Croix International: One, Cardinal Francisco Javier Errázuriz, has been accused of covering up a sex abuse scandal from when he was archbishop of Santiago, Chile, while Cardinal George Pell of Australia faces both his own sex abuse charges and accusations that he intimidated other alleged abuse victims when he was a diocesan bishop.

More recently, the retired archbishop of Washington, former Cardinal Theodore McCarrick -- a powerful figure in the American church for many decades -- was ordered to cease public ministry after multiple allegations of sexual abuse and misconduct emerged against him. In late July, the 88-year-old McCarrick resigned from the College of Cardinals under obvious pressure from the church hierarchy, the first cardinal to do so in more than 90 years. An advisory commission appointed by McCarrick in 2013 to come up with solutions to the sex abuse problem has been widely perceived as a failure.

A law professor, Brandon Garrett, discusses the racist origins of the death penalty.