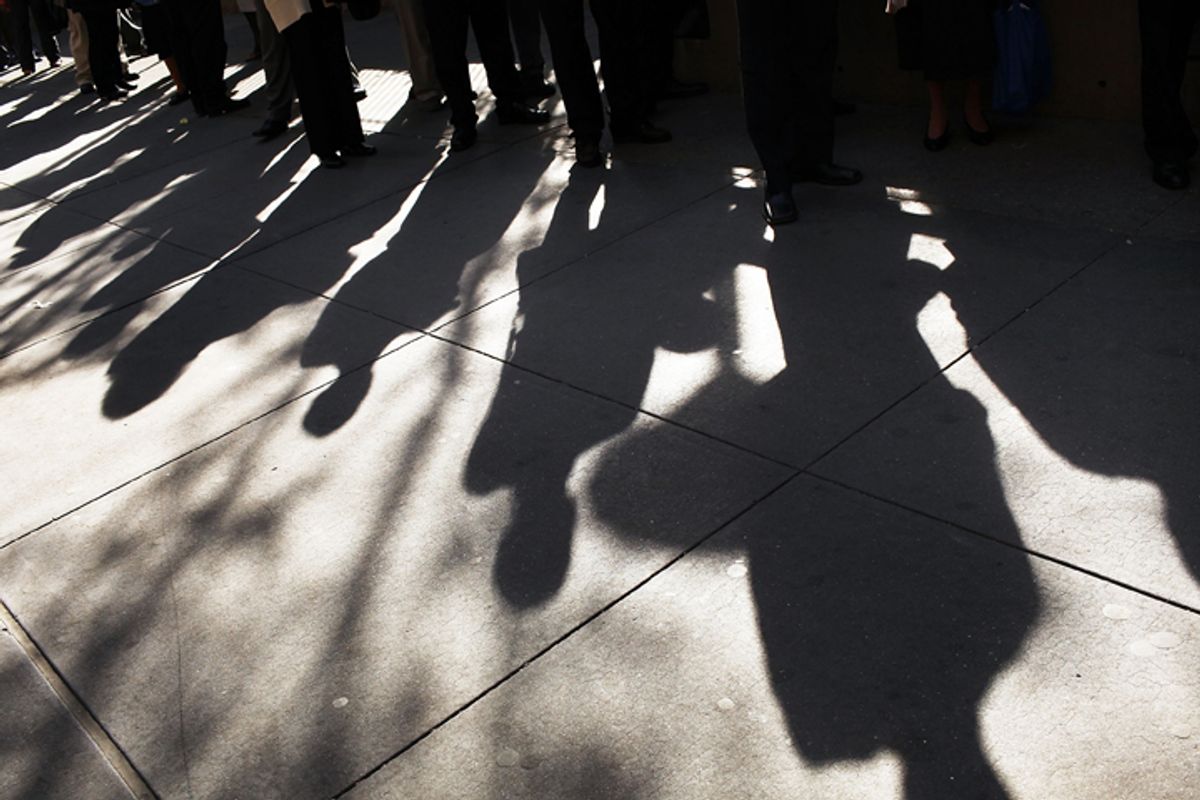 The official rate of unemployment in America has plunged to a remarkably low 3.8%. The Federal Reserve forecasts that the unemployment rate will reach 3.5% by the end of the year.

But the official rate hides more troubling realities: legions of college grads overqualified for their jobs, a growing number of contract workers with no job security, and an army of part-time workers desperate for full-time jobs. Almost 80% of Americans say they live from paycheck to paycheck, many not knowing how big their next one will be.

Blanketing all of this are stagnant wages and vanishing job benefits. The typical American worker now earns around $44,500 a year, not much more than what the typical worker earned in 40 years ago, adjusted for inflation. Although the US economy continues to grow, most of the gains have been going to a relatively few top executives of large companies, financiers, and inventors and owners of digital devices.

When Republicans delivered their $1.5tn tax cut last December they predicted a big wage boost for American workers. Forget it. Wages actually dropped in the second quarter of this year.

Not even the current low rate of unemployment is forcing employers to raise wages. Contrast this with the late 1990s, the last time unemployment dipped close to where it is today, when the portion of national income going into wages was 3% points higher than it is today.

What’s going on? Simply put, the vast majority of American workers have lost just about all their bargaining power. The erosion of that bargaining power is one of the biggest economic stories of the past four decades, yet it’s less about supply and demand than about institutions and politics.

Two fundamental forces have changed the structure of the US economy, directly altering the balance of power between business and labor. The first is the increasing difficulty for workers of joining together in trade unions. The second is the growing ease by which corporations can join together in oligopolies or to form monopolies.

What happened to unions

By the mid-1950s more than a third of all private-sector workers in the United States were unionized. In subsequent decades public employees became organized, too. Employers were required by law not just to permit unions but to negotiate in good faith with them. This gave workers significant power to demand better wages, hours, benefits, and working conditions. (Agreements in unionized industries set the benchmarks for the non-unionized).

Yet starting in the 1980s and with increasing ferocity since then, private-sector employers have fought against unions. Ronald Reagan’s decision to fire the nation’s air-traffic controllers, who went on an illegal strike, signaled to private-sector employers that fighting unions was legitimate. A wave of hostile takeovers pushed employers to do whatever was necessary to maximize shareholder returns. Together, they ushered in an era of union-busting.

Employers have been firing workers who attempt to organize, threatening to relocate to more “business friendly” states if companies unionize, mounting campaigns against union votes, and summoning replacement workers when unionized workers strike. Employer groups have lobbied states to enact more so-called “right-to-work” laws that bar unions from requiring dues from workers they represent. A recent Supreme Court opinion delivered by the court’s five Republican appointees has extended the principle of “right-to-work” to public employees.

Today, fewer than 7% of private-sector workers are unionized, and public-employee unions are in grave jeopardy, not least because of the Supreme Court ruling. The declining share of total US income going to the middle since the late 1960s – defined as 50% above and 50% below the median – correlates directly with that decline in unionization. (See chart below).

Perhaps even more significantly, the share of total income going to the richest 10 percent of Americans over the last century is almost exactly inversely related to the share of the nation’s workers who are unionized. (See chart below). When it comes to dividing up the pie, most American workers today have little or no say. The pie is growing but they’re getting only the crumbs.

What happened to antitrust

This means workers are spending more on such goods and services than they would were these markets more competitive. It’s exactly as if their paychecks were cut. Concentrated economic power has also given corporations more ability to hold down wages, because workers have less choice of whom to work for. And it has let companies impose on workers provisions that further weaken their bargaining power, such as anti-poaching and mandatory arbitration agreements.

This great shift in bargaining power, from workers to corporations, has pushed a larger portion of national income into profits and a lower portion into wages than at any time since the second world war. In recent years, most of those profits have gone into higher executive pay and higher share prices rather than into new investment or worker pay. Add to this the fact that the richest 10% of Americans own about 80% of all shares of stock (the top 1% owns about 40%), and you get a broader picture of how and why inequality has widened so dramatically.

What happened to politics

Another consequence: corporations and wealthy individuals have had more money to pour into political campaigns and lobbying, while labor unions have had far less. In 1978, for example, congressional campaign contributions by labor Political Action Committees were on par with corporate PAC contributions. But since 1980, corporate PAC giving has grown at a much faster clip, and today the gulf is huge.

It is no coincidence that all three branches of the federal government, as well as most state governments, have become more “business-friendly” and less “worker-friendly” than at any time since the 1920s. As I’ve noted, Congress recently slashed the corporate tax rate from 35% to 21%.

Meanwhile, John Roberts’ supreme court has more often sided with business interests in cases involving labor, the environment, or consumers than has any Supreme Court since the mid-1930s. Over the past year it not only ruled against public employee unions but also decided that workers cannot join together in class action suits when their employment contract calls for mandatory arbitration.

The federal minimum wage has not been increased since 2009, and is now about where it was in 1950 when adjusted for inflation. Trump’s labor department is busily repealing many rules and regulations designed to protect workers.

The combination of high corporate profits and growing corporate political power has created a vicious cycle: higher profits have generated more political influence, which has altered the rules of the game through legislative, congressional, and judicial action – enabling corporations to extract even more profit. The biggest losers, from whom most profits have been extracted, have been average workers.

America’s shift from farm to factory was accompanied by decades of bloody labor conflict.The shift from factory to office and other sedentary jobs created other social upheaval.

The more recent shift in bargaining power from workers to large corporations – and consequentially, the dramatic widening of inequalities of income, wealth, and political power – has had a more unfortunate and, I fear, more lasting consequence: an angry working class vulnerable to demagogues peddling authoritarianism, racism, and xenophobia.