Martin O'Malley on Bernie, Hillary, the Democratic debate and what went wrong in 2016

If America wants a healthier democracy, we need better debates — so says the "other Democrat" who ran in 2016 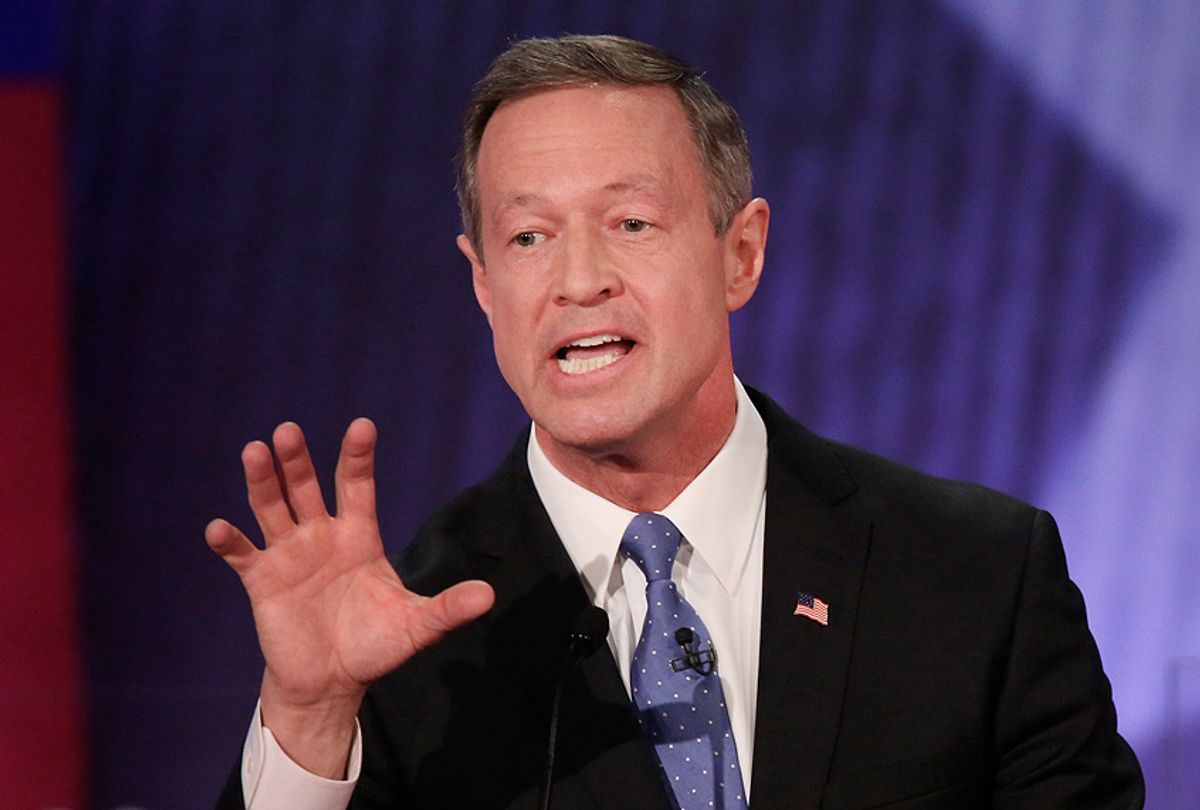 Former Maryland Gov. Martin O'Malley got a raw deal during the 2016 Democratic primaries. Most critics of the Democratic Party focus on how its eventual nominee, Hillary Clinton, may have had an unfair advantage over Sen. Bernie Sanders of Vermont. They forget that there were other people running, at least at first: O'Malley, former Sen. Jim Webb of Virginia and former Rhode Island Gov. Lincoln Chafee. Of those three, O'Malley was the one who stayed in the race by far the longest, even if he never developed much credibility as a pathway somewhere between Clinton and Sanders.

Logically speaking, O'Malley at the very least deserved attention (a point I made as far back as October 2015). That didn't happen: Clinton seemed more than willing to allow Sanders -- a candidate she was certain she could easily beat -- to be her principal opponent, the entire party seemed determined to marginalize O'Malley. He was brushed aside during the debates and even mocked on "Saturday Night Live" for having a candidacy at all.

Given that O'Malley had previously developed a reputation as one of America's more accomplished governors, this seemed not only unfair, but downright counterintuitive, at least to those who were genuinely interested in having the Democrats field their strongest possible presidential candidate. So I was interested in hearing O'Malley's thoughts about the future of the Democratic Party. during his recent visit to Salon Talks. This conversation has been edited for length and clarity. (You can watch a fuller version embedded below.

Before the camera started rolling, you and I were talking about the primary process. You were specifically discussing with me the way that ratings trump substantive discourse, and how that damages democracy. Would you be willing to elaborate?

I think right now in our country there’s a tremendous amount of anxiety about where we’re headed as a nation. The whole world is moving into what many call a third industrial revolution. Yet we seem, as a nation, to be stumbling backwards into this one instead of facing it square on. At the same time what we’ve seen is a bit of a degeneration in our presidential politics, to put it mildly, where in the absence of any fairness doctrine, or strong parties that push back, ratings seem to have become king, rather than public discourse, in our parties' primary debates.

Before the camera started rolling, I brought this up as a compliment to you because you’re one of the very few journalists that’s written about that aspect. I mean, many people have talked about the corporations. People publicly finance elections. We have to somehow figure out how we conduct our presidential primaries in ways that give life to the public discourse instead of just lifting up the most agitational for the sake of ratings. The gentleman who’s the head of CBS was quoted during Donald Trump’s rise, while the Democratic Party was not debating and the Republicans were debating every other week in prime time.

We saw more and more how every question was being routed through Donald Trump and the wall-to-wall coverage of his rallies pulling up to the airport hangar. The head of CBS said, “In the old days, we wouldn’t have been allowed to do this because of fairness doctrine. I know it’s not good for the country but it’s great for ratings. CBS is going to have a really good year. I say, go Donald, go.”

Just because it was good for CBS didn’t mean that it was good for the country. I think he sensed that even as he said it. It’s a piece of what we need to recover as a nation if we’re going to come out of this rather aberrational presidency.

Let’s pivot to the Democratic primaries in 2016. There were not as many debates held as normally would have been the case. It seemed like Hillary Clinton because of her extensive career and name recognition and Bernie Sanders, because he was offering a message from outside the Democratic Party paradigm, sucked up all the attention in the room.

You think? That was my perception as well.

Martin O'Malley on how Democrats can shut down Trump's fascism

Do you think that’s part of the same phenomenon that you’re describing, in terms of ratings and how that facilitated the rise of Donald Trump?

I think there are some parallels. I’ve become friendly with Gov. Jeb Bush -- only Donald Trump can do that to me! As we talked, unpacked our very different experiences in the last presidential race, we weren’t shy at the time at kicking over the soup and saying it was very irresponsible of the Democratic Party not to be debating, not to telling the alternative story to the story that Donald Trump was spinning. Shame on us as we watched this Trump candidacy rise, becoming more and more overt in its scapegoating and other characteristics of strongman politics like we’ve seen before, and we were silent. We didn’t have our first debate until, I think, October. I’m not sure we ever really had a prime-time debate.

The scheduling was always such that viewership was going to be lower. It does tie into the complaint that a lot of Sanders supporters have, that on everything from how the debates were scheduled to various other arcane rules, it seemed to all be -- let’s use the word "rigged" -- for Hillary Clinton. Did you feel that way?

They didn’t have that complaint when the debates were delayed, because it actually worked for both Sen. Sanders and Hillary Clinton to be the only two. They kinda liked it that way. We heard those complaints from Sen. Sanders only after the primary schedule started to roll out. Initially, I was unable -- though we asked [Sanders] and asked his campaign, to get him to join me in calling for an earlier debate schedule and more debates. I’m sure they made a tactical decision that it wasn’t in their best interest to do that.

Had he joined us, we would have had more debates. I’ll leave it to you to imagine what might have happened differently if the Democratic Party were on the air answering Donald Trump during his rise in the Republican debates, rather than remaining silent. I think the common thread [in both parties] is that it really did become so much more driven by ratings than we’ve ever had before.

If we continue down this road, there’s a real concern that our presidential debates, our primary debates — I distinguish them from the general election debates where there’s a commission and there’s rules and there’s equal time — are in danger of going down the road where they look more like the Jerry Springer show crossed with "Hollywood Squares" than a traditional presidential debate. I think among the issues that we have to tackle to restore the integrity and trust in our democracy, those presidential primary debates are certainly one of them.