Chris Collins, his son and another man have been accused of 13 counts of securities fraud and other crimes 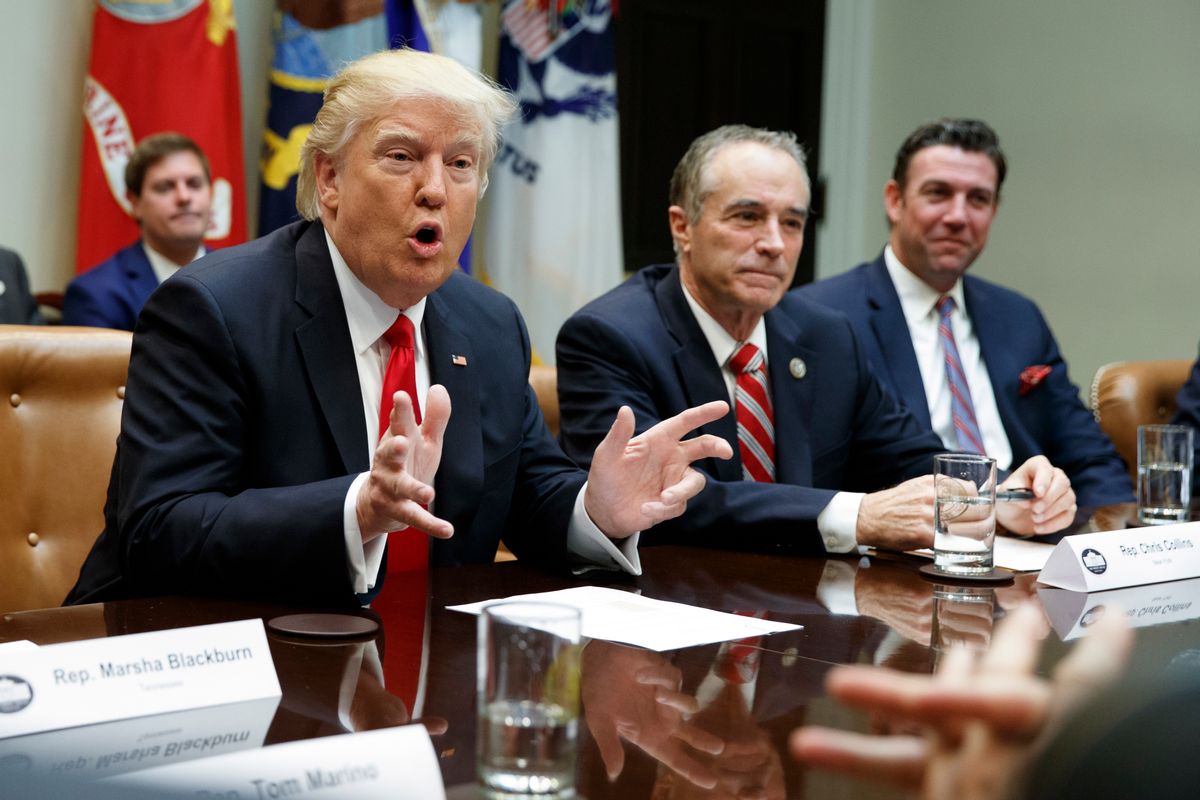 Rep. Chris Collins, R-N.Y., best known as the first sitting congressman to support Donald Trump's presidential campaign in 2016, pleaded not guilty on Wednesday to a series of financial crimes related to an alleged insider trading scheme.

The 13 charges facing Collins, his son and another man include securities fraud, wire fraud and false statements, according to CNN. The charges relate to actions undertaken by the three individuals to avoid losing money after an Australian pharmaceutical company, Innate Immunotherapeutics Limited, received unfavorable results from a series of tests.

"In or about June 2017, Christopher Collins, the defendant, violated the duties he owed to Innate by passing material, nonpublic information regarding the drug trial results to his son, Cameron Collins, the defendant, so that Cameron Collins could use that information to make timely trades in Innate stock and tip others," the charges against Collins claims. After describing how Collins' son allegedly passed on the information to Stephen Zarsky, one of the other defendants, as well as several other people, the charges claim that "in total, these trades allowed Christopher Collins, Cameron Collins, and Stephen Zarsky, the defendants, and CC-1 through CC-6, to avoid over $768,000 in losses that they would have otherwise incurred if they had sold their stock in Innate after the Drug Trial results became public."

While Collins and his alleged co-conspirators will have to face a legal battle because of the accusations against them, it is notable that at least one politician with a history of shady financial dealings has yet to face the music.

Former Secretary of Health and Human Services Tom Price has been accused of trading in medical stocks while holding public office and receiving donations from corporations that he would ultimately have to regulate. Trump himself is a president with a wide list of conflicts of interest pertaining to his own business empire that have allowed him to enrich his brand while serving in the White House.

"I think they are part of a problem that we are seeing particularly under the Trump administration, but then under the surface for the past several decades," Julie Margetta Morgan, fellow at the Roosevelt Institute, told Salon. "The public sort of recognizes it as their concerns about corruption in government continue to rise year after year. We're having a public debate today about the role of money in politics, but we're not seeing a bunch of attention paid to the role of money in government, even though it's just as big of a problem. So we really need to be looking at the way that money is influencing how individual actors like members of Congress but also government agencies are acting for the benefit of either themselves or for powerful interests."

She added, "I think we do need good enforcement of the laws that are on the books, but I do think we're at a time where we haven't essentially updated our laws on corruption and influence in government since Watergate, and we are at a time where we need to do something new. So I think for a case like Chris Collins, we really need to be looking at how much we're comfortable with members of the legislature having personal financial interest in the things that they're talking about. And as much as it's a problem for the legislature, it's a problem for actors within government agencies as well. We need to take a sharper look at the revolving door and have stronger restrictions in place that keep people from cycling in and out of agencies and the businesses that those agencies are supposed to regulate."

Morgan pointed to a report by the Roosevelt Institute that outlined ways that Trump himself could start to be held accountable in the same way as Collins. The proposals included restricting the types of investment holdings that presidents and vice presidents can hold while they are in office, prohibiting hiring or otherwise arranging employment for family members without a congressional waiver and requiring the release of all tax information regarding presidential and vice presidential candidate for multiple years prior to their elections.

For what it's worth, Collins' attorneys vigorously denied the charges against him.

"We will answer the charges filed against Congressman Collins in court and will mount a vigorous defense to clear his good name," Jonathan Barr and Jonathan New said in a statement on Wednesday, according to CNN. "It is notable that even the government does not allege that Congressman Collins traded a single share of Innate Therapeutics stock. We are confident he will be completely vindicated and exonerated." Such a statement can be made because Collins allegedly directed his family friends to trade their stocks, as his were reportedly caught up in the Australian stock market at the time.

Despite the claims of Collins' attorneys, Speaker of the House Paul Ryan removed Collins from his position on the House Energy and Commerce Committee while an investigation occurs.

"While his guilt or innocence is a question for the courts to settle, the allegations against Rep. Collins demand a prompt and thorough investigation by the House Ethics Committee," Ryan said in a statement. "Insider trading is a clear violation of the public trust."

The news of Collins' indictment may not have come as a total surprise to Ryan. The House Ethics Committee had disclosed that it was investigating him for potentially violating both federal law and House rules regarding insider trading as far back as October. The Office of Congressional Ethics reviewed Collins' conduct starting in March 2017 and voted to present the matter to the House ethics panel last month.

Salon talks with a Harvard law professor about how Trump could be impeached.