The Menuist: An avocado chocolate pudding from Abbott Kinney that everybody will love

If you want to fall in love with a vegetable, let Travis Lett, chef-owner of Gjusta in Venice, prepare it 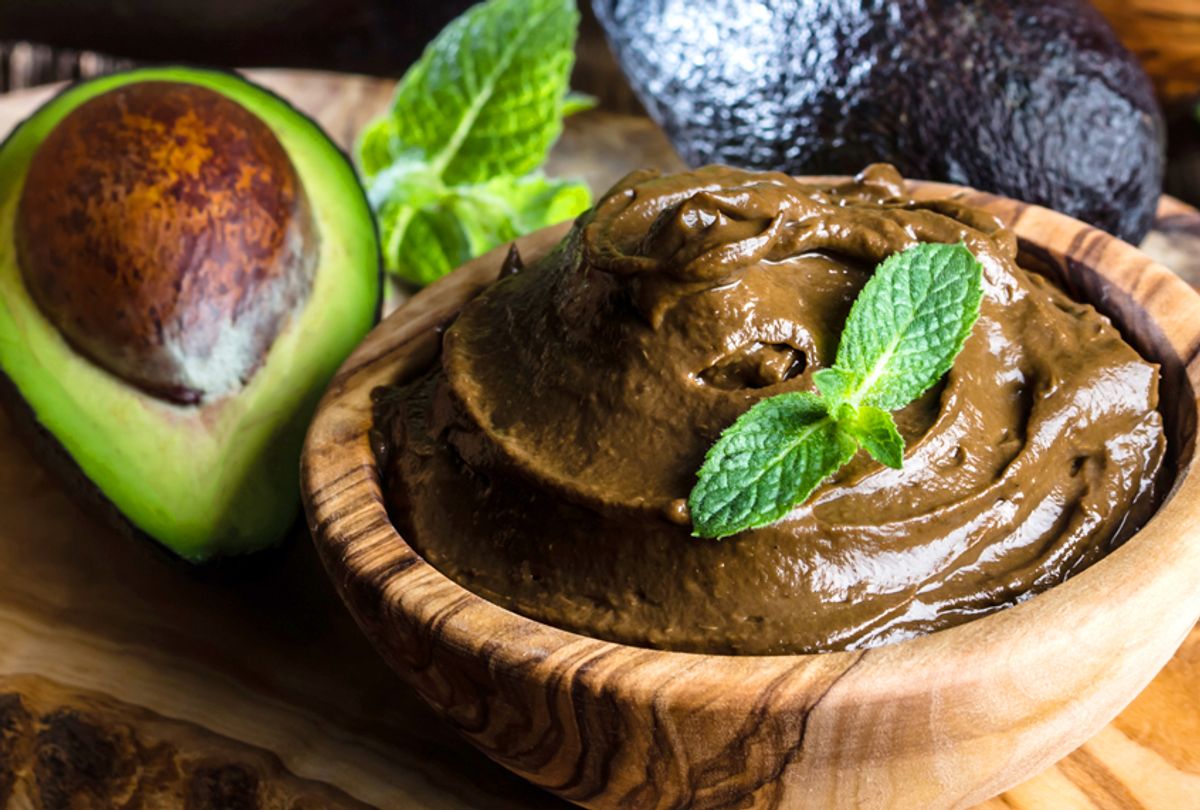 Jell-O developed it in the 1920s as hospital fare; a decade later, homemakers found the product under the name "Walter Baker's dessert." But chocolate pudding as most of Americans know it only became widely available in the 1950s when it made its instant debut.

It was powder and milk, not forcemeat and cloth. No flour, no cornmeal, no sago. It didn't wobble like its forebears, wasn't the Yorkshire pudding or suet pudding that grew from a sausagey tradition in the sixteenth-century. It was nothing like the blood pudding you'll find for breakfast in the UK. The word "pudding" comes from Boudin, the Old French for "black pudding," a development from Botellus, Latin for "sausage, small intestine." '50s pudding was the stuff of Americana, soft and sweet and spoonable.

There is a world of cooked puddings — sticky toffee, steamed carrot, plum —but I imagine for many they remain obscure. When I grew up in the 1990s, George Costanza was perfecting "pudding skin singles"; Handi-Snacks knocked around lunchboxes. My parents never bought those, though not due to any purist dictum (My first memory with a whisk: disappearing vanilla pudding mix into 2 percent milk, the bloom of an eggless eggy scent as metal spines thwacked against a daisy-yellow bowl marked with faint measurements). Pudding took the form of banana and 'Nilla Wafers, or chocolate and Cool Whip and crushed Oreos: Dirt.

Scribner's “Encyclopedia of Food and Culture” labels puddings "staple foods." I thought about what this classification might mean today while reading an interview with Travis Lett, the chef-owner of two of my favorite restaurants in Southern California: Gjelina and Gjusta. "For me," Lett says, "healthy food is about comfort and tradition."

Our staples are changing; so, too, our definitions of healthy. Perhaps what remains is comfort and tradition. But what happens when what was once comfortable can no longer be consumed with ease? When the succor of a supper is overshadowed by other concerns? And so cauliflower rices and zucchini noodles, vegan whipped creams born of coconut milk, the aqua fava meringues. And chocolate avocado pudding.

I first tried it at Gjusta, Travis Lett's bakery-cafe-delicatessen in Venice, California. If you want to fall in love with a vegetable, let Lett prepare it. If you can wait for a dinner reservation, eat at his sit-down spot Gjelina on Abbott Kinney, an enchanted garden of a restaurant, where the pizza comes out with blister bubbles blacking a crust that will have you besotted over anything bitter and green; where plain trumpet mushrooms, too, are a revelation in a pond of brown butter. Wander down the block, and eat perfect Japanese pickles at his most recent venture MTN. Or, head to Sunset Avenue, park across from Gold's Gym, and go to Gjusta.

The G is silent. The WiFi is nonexistent. Gjusta has (maybe) two tiny cafe tables inside; seating is standing at an immense marble counter that borders the espresso machine and an edge of the kitchen. Through the backdoor, you'll find picnic tables and milk crates and all manner of communal benching in a space that would be perfect if it weren't for the strict no dogs allowed signage. I sound rhapsodic, I know, but it's because Gjusta is an embarrassment of the riches I'm reminded people can create, a short walk from the Pacific Ocean.

I spent a decade working in the food industry; I constellated a honeymoon around Michelin stars; I love to cook and I love to eat, and yet I've done much of that eating and cooking with a chronic eating disorder. In the name of health, I have made meals out of everything from Quest bars to sugar-free white chocolate instant pudding. I will eat anything except for the list of things I am not eating, and I have avoided bread, pasta, cheese, dairy, meat, fat, nightshades, corn syrup and sugar and alcohol and peanut butter when my only allergy is to quinoa.
READ MORE: The “Boys’ Night In” pork taco recipe
All this micromanaging can lead to an alienation from one's food. But if you want to cure yourself of any of the many mind-polluting strains of dietary quackery and just feel good, alimentary joy (I do), go to Gjusta. Whether you aim to destigmatize gluten or reacquaint yourself with pork or simply get waffles for breakfast, the first thing you will smell is the bread. Flour sacks pile up beside the door; if you look past the counters, behind a spree of wooden racks, you will see the kitchen, where some dozen types of loaves are prepared every day, sourdough baguettes and battards knobby with porridge, a ciabatta that could only be a slipper for a giant.

You will find case after case, counter after counter, and you will want everything: the baklava croissants glimmering with Tinkerbell-green ground pistachios, cakes whole or sliced, cookies classic and less-so (I recommend the date miso). There is cheese by the pound, from Wisconsin or France; meat cured in house; fish like the best of Russ & Daughters: herring, salmon belly salad, anchovies slippery and argent. If you turn around (you'll need to, to take a number), open the door to what looks like a walnut china cabinet; it's a refrigerator stocked with pâtés

and pickles (the shishitos are zippy right now), duck rillettes and wheels of butter. Along the walls, shelves lined with jars of jam and preserves, walnut honey and seeded honey and granola and coffee and potato chips, too, that if you're lucky, might still be warm. If you feel they need extra salt (I do), perhaps Lett himself will be the one to deliver your monkey dish of fleur de sel.

There's a menu, with breakfast fare and sandwiches and fish platters and mezze plates; there are juices and espresso drinks worth the upcharge to be ordered with the best house-made almond milk I've had in this city. With all this, it's easy to miss the case of cold desserts — the panna cotta with a few dark cherries skittled across the top, the poached fruit, and, of course, the chocolate avocado pudding.

It is dark, dense, and rich, texturally similar to pots de crème, and it is the sort of food that makes a very good case for becoming the new standby. By that I mean it surpasses cooked chocolate pudding and instant chocolate pudding on all counts — it is tastier, easier to prepare, and, at least by today's current metrics, healthier.

It is a lovely breakfast, and preparing it is an easy task. Like a trip to Gjusta, making a good, simple thing brings me a little closer to what I want food to be.

I recreated it in my own kitchen after finding the recipe here. That kitchen, I should add, is an apartment kitchen in an eighty-year-old building in Los Angeles with a counter of just 28" x 25." But what more does one need? It fits a cutting board and a powerful blender, all that's required for chocolate avocado pudding.

There are lessons everywhere, if you listen. The rough scrape of a spoon scouring the empty cup of a emptied avocado, the stitching of a paring knife slitting a vanilla bean pod. You'll put those things in a blender, add a few sweeteners, the juice of an orange, salt, and the best cocoa you can find (I had raw cacao and Divine). The blender will chug and once the puree comes together you'll add hot water, which will satinize everything. Divide the pudding into ramekins or jars, let it set for a few hours, enjoy it for breakfast sprinkled with cacao nibs and salt. I'm phasey about my salt: sometimes I have Maldon or sel gris or Himalayan pink, but right now I'm content with coarse-grind kosher and a container of dull-brown alder smoked salt I'm trying to finish. Both taste good on the pudding.

Of all the puddings or pudding-like breakfasts having their moment (chia seed pudding, overnight oats), this is my favorite. There are pared down versions with less sweetness or vanilla; they are good, too. If you are versed in Kardashian, you know that Kourtney starts her day with a Manuka honey and MCT-oil version (no chocolate).

The official recipe for Kourtney Kardashian's avocado pudding is locked (exclusive access to Kourtneykardashian.com can be yours for $2.99/mo or $24.99/yr), but the internet regurgitates recipe after recipe, "I tried it" photospread and videos. And while Lett's restaurants may be as Grammable as anything, the aesthetic is secondary to the food. That food is generous, by the way: I'm not surprised he shared his recipe. It is easy for the sheen of "healthy" to outshine the homier "comfort" and "tradition," but anyone who's gone on a juice cleanse and found herself missing the sheer act of chewing will know just how primal certain needs are. Needs are tastes are textures are memories.

The pudding I remember most, oddly, is one I maybe never ate. When I went on my first diet, I found myself sitting through seventh-grade math, making lists of foods I used to love as a girl. I was subsisting on Saltines, then, and my mind wandered to the kitchen. I listed lasagna and Velveeta Shells and Cheese and black-and-white muffins swirled with cream cheese, but I was always stymied by one thing: strawberry pudding. Instant strawberry pudding. In my mind, such a food existed, but I've asked and I've looked and now I'm convinced:  there never really was such a thing.