In rush to retweet President Trump, Treasury Department may have just violated the law

Twitter fail: The Department of Treasury may have violated the Hatch Act 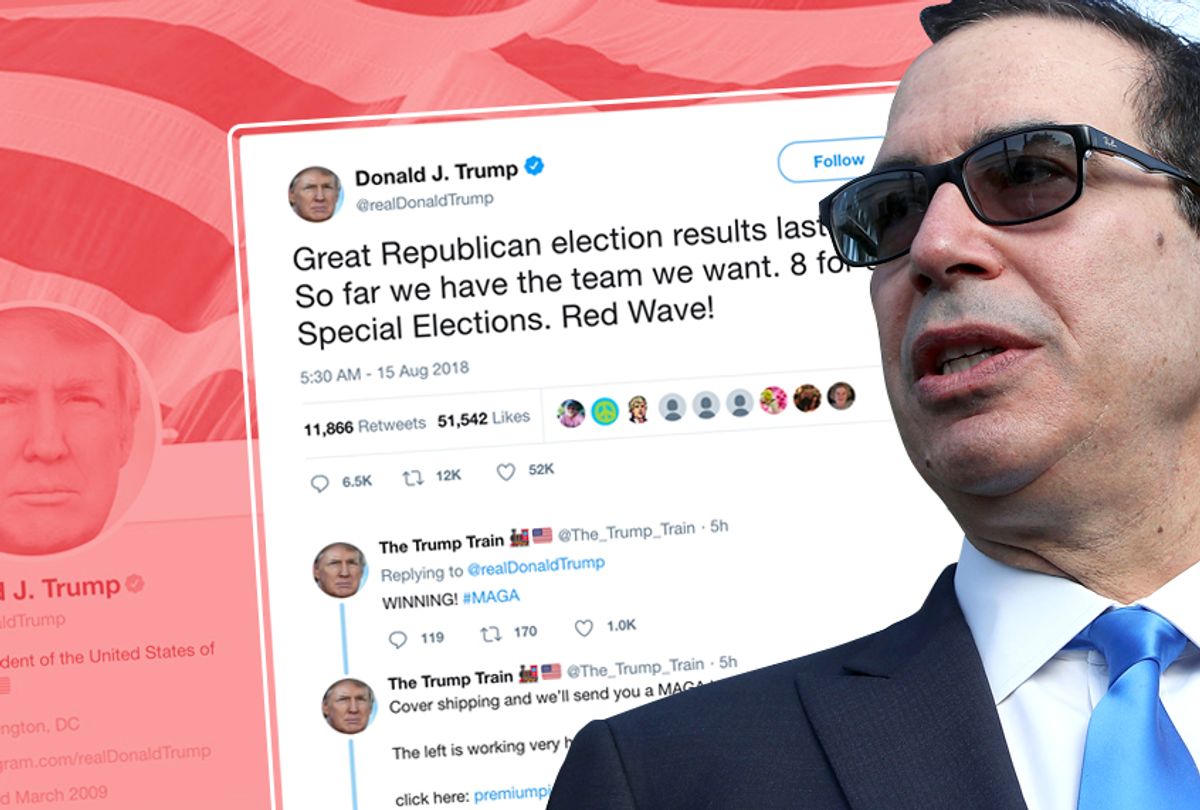 The Department of Treasury may be in trouble after its official Twitter account retweeted a campaign message posted by President Donald Trump on Tuesday.

"Great Republican election results last night. So far we have the team we want. 8 for 9 in Special Elections. Red Wave!" Trump tweeted on Wednesday night.

Shortly after the tweet was published for the public, CNBC reported it was retweeted by the Treasury Department's official account, an act that could have placed the department in violation of Hatch Act rules that prohibit the use of government platforms for raw politicking.

Nick Schwellenbach, a former communications director at the U.S. Office of Special Counsel (which is in charge of monitoring potential Hatch Act violations) told CNBC that "Treasury definitely crossed the line here. Whoever retweeted this and directed its retweet at Treasury violated the Hatch Act – they supported a political party using official federal resources. It's a violation. Full stop."

The Treasury Department's gaffe brings attention to a recurring problem with members of the Trump administration using their positions of prominence in ways that critics believe are inappropriate. Earlier this month, the Committee for Responsibility and Ethics in Washington filed Hatch Act complaints against 10 Trump administration officials, including Office of Management and Budget (OMB) Director Mick Mulvaney and White House Press Secretary Sarah Huckabee Sanders.

"We continue to see Trump Administration officials at all levels engaged in unprecedented partisan political activity using their official Twitter accounts in direct violation of the Hatch Ac. Despite multiple investigations and violations found, the Trump Administration clearly has no intention to stop the misuse of government offices and resources for political purposes. We are now calling on the OSC to consider additional measures to prevent the rampant abuses coming from this administration," CREW Executive Director Noah Bookbinder said in a statement at the time.

Prior to the complaints filed in August, CREW had also filed successful complaints against Ambassador to the United Nations Nikki Haley and White House Director of Social Media Dan Scavino Jr. Counselor to the President Kellyanne Conway was forced to receive ethics counseling after she went on television to publicly encourage Trump voters to purchase Ivanka Trump products.

CREW had the following complaint about Sarah Huckabee Sanders:

On March 6, 2018, Ms. Sanders appears to have used her official @PressSec Twitter account to make a partisan political post supporting candidate Donald J. Trump. As detailed below, such action likely violates the Hatch Act. On this day, Ms. Sanders shared a Wall Street Journal article regarding U.S. oil production along with her commentary: “Great again: ‘The U.S. is likely to overtake Russia to become the world’s largest oil producer’”. The tweet reads in full:

"Great Again: 'The U.S. is likely to overtake Russia to become the world's largest oil producer.'"

While Ms. Sanders did not recite the Trump campaign’s full slogan, using the term “Great again” almost certainly was intended to invoke “Make America Great Again” and suggest that President Trump had fulfilled his campaign promise. In addition to the terms “Make America Great Again” and “MAGA”, Donald Trump has used “Great again” in order to promote his political campaign.

CREW also had the following complaint about Mick Mulvaney:

On April 5, 2018, Mr. Mulvaney authored an op-ed published by CNBC regarding the Trump Administration’s economic policy entitled “‘MAGAnomics’ is working and defying critics.” The op-ed was also published on the White House website noting that the op-ed appeared in CNBC. On several occasions in the op-ed, Mr. Mulvaney used the term “MAGAnomics” when discussing the administration’s economic policy.

There is little doubt that the @MickMulvaneyOMB Twitter account is used by Mr. Mulvaney for official government purposes. According to his Twitter page, the handle was created in July 2017 a few months after his confirmation as OMB Director. The account profile states that Mr. Mulvaney is the “Director of Office of Management and Budget.” Furthermore, the account’s profile picture is an image of Mr. Mulvaney on what appears to be the White House grounds and the header features an image of the OMB logo. Mr. Mulvaney also uses the @MickMulvaneyOMB Twitter account to post about official OMB activities and also links to the official website of the White House Office of Management and Budget, www.omb.gov.

Secretary of the Treasury Steven Mnuchin has also gotten into trouble, involving ethics complaints. These included a report that he had requested private use of a government aircraft (a military jet) so that he and his wife, former actress Louise Linton, could fly to Europe for their honeymoon over the summer, according to The Washington Post. He also aroused controversy when he and Linton used a government aircraft to fly to Kentucky during a solar eclipse in August.

The most troubling aspect of this story is the pervasiveness of the alleged corruption that is evident here. It would be one thing if it was only one or two officials who had been accused of misusing government platforms for private politicking or advertisements. Yet for so many government officials connected with Trump to misuse their power in this way suggests that the problem may be one of the culture within the Trump presidency rather than with individual bad actors.

What are the odds that Trump could be impeached?