"Disenchantment" and the evolution of Matt Groening's feminism

The man behind Lisa Simpson gives us a progressive Princess. But does it restore his cred? 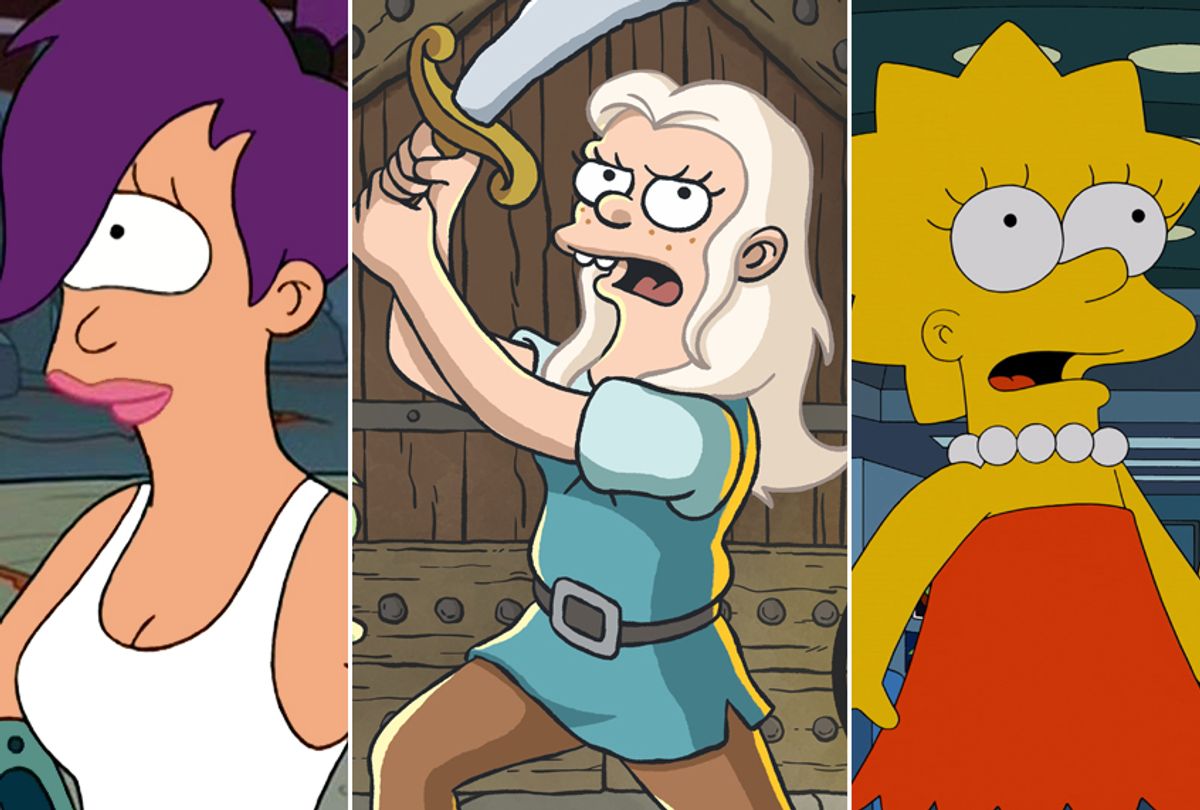 Little of the coverage surrounding “Disenchantment,” Matt Groening’s newest animated comedy, mentions the creator’s botched defense of Apu, the highly stereotypical Indian owner of the Kwik-E-Mart and the subject of 2017’s “The Problem with Apu.” Asking why that matters isn’t out of bounds, since Apu exists in "The Simpsons," an entirely different universe from this new Netflix series.

“The Simpsons” hometown of Springfield parodies AnyTown, U.S.A. Regardless of how dated some of its references can be, the classic Fox comedy is set in the present. And the show rolls out it landmark 30th season in September.

“Disenchanted” makes its series debut Friday and introduces viewers to Dreamland, a place inspired by medieval Europe and fairy tales. Giants, elves, gnomes and dwarves share the land with human knights and ladies.

Aside from the nerdy banter, adorable puns and brand-specific comedic timing, the only thematic link between “Disenchantment” and “The Simpsons” — save for former’s wink at The Happy Little Elves, a children’s show within “The Simpsons” — is its professed feminism.

Groening touts the show’s feminist cred loudly and with vigor to any journalist who can hear. Helping this declaration is the casting of “Broad City” co-creator Abbi Jacobson to play Princess Bean, daughter to King Zøg, Dreamland’s patriarchal grump of a ruler (John DiMaggio, channeling a diner manager in the Bronx).

Bean’s adventures begin in a riot grrl by way of '90s-era Julia Roberts fashion, with our princess playing runaway bride. Zøg treats marriage to his daughter as a diplomatic and political tool instead of seeing her as a woman capable of making her own choices. Her princely suitor is handsome, to be sure, but he’s too stupid to live.

Thus Bean dashes off, joined in short order by Elfo the elf (Nat Faxon), a black sheep fleeing the rest of his sickeningly cheery kind, and Luci (Eric Andre), an onyx demon with feline ears bonded to Bean as part of a cursed wedding gift. Fortunately that curse and Bean’s aims are aligned; he’s meant to guarantee Bean won’t marry her way into happily ever after and coax her to do the wrong thing, which is fine and dandy for a woman who doesn’t want to get hitched in the first place and loves how right doing the wrong thing can feel.

“Disenchantment” occupies yet-to-be discovered territory, but Bean and company represent an evolution in a familiar lineage of Groening's female characters, particularly from his earliest takes on “The Simpsons.”

Here, as in “Futurama” and “The Simpsons” (though to a lesser degree), female empowerment is executed far more cleanly than the few depictions of ethnicity allowed in Groening’s storylines. Generally his series have avoided that thorny patch altogether, as most cartoons do, which is why the Apu conundrum is so irritating.  The point Hari Kondabolu makes in “The Problem with Apu” is the character’s cringeworthy stereotyping didn’t have to happen at all; it was a choice made by the actor voicing him, Hank Azaria, that blossomed into a phenomenon.

“The Simpsons” makes nearly all of its characters indistinct save for their middle-note Americanness. Again, the fact that Apu stands out an as “other” in Springfield remains a problem the writers publicly and stubbornly refused to confront and resolve last season. In a New York Times interview Groening insists he loves the character of Apu, “and it makes me feel bad that it makes other people feel bad. But on the other hand, it’s tainted now — the conversation, there’s no nuance to the conversation now.” In subsequent interviews to support “Disenchanted” he declines to talk about it again.

Groening and his writers skipped over that trap altogether with “Futurama.” Its warped vision of a space age yet to come sees humanity as a race split not by ethnicities but between haves and have nots, blended with beings from other planets, some bipedal and humanoid, others not.

At any rate, “Disenchantment” avoids stereotyping any ethnic group by painting all of its characters generically. Humans and magical beings come in all colors: Elfo, for example, is green, and Luci is black. Not brown, pitch black. Bean isn’t anything more than an above-average maiden fair distinguished by her buckteeth and mischievous streak. Dreamland isn’t so much a post-racial society as a non-racial patriarchy. And Bean, an imperfect malcontent trapped by her station and medieval structure, responds to any restrictions placed upon her by embarking on adventures beyond the walls of her dumb dad’s kingdom.

While Bean’s exploits aren’t as peppy as the ones her “Simpsons” and “Futurama” sisters enjoy, which is the series’ main flaw, a few episodes possess a spirit worth celebrating. One installment turns a story about a giant into a fable about assumption, prejudice and body positivity without letting go of the show’s signature goofiness. It’s placed late in season 1, so getting there takes a bit of slogging, but that episode is a high note in a season accurately and kindly described as middling.

Bean represents the version of feminism Jacobson’s Abbi personifies on “Broad City” — as in, she’s a normal flawed human making dumb mistakes, who isn’t punished for prioritizing having a good time over fulfilling some duty prescribed to her by others. And neither Bean nor Abbi is waiting around for a prince to save her, not even the “right” one.

In fact, Bean's saving grace is how ordinary she is in comparison Groening’s other female leads. She gets in and out trouble without being superhumanly strong or skilled in combat, as Leela is “Futurama.” She’s smart and stands up to the charmless men who stand in her way. At the same time the writers don’t make a point earning her autonomy by making her a genius (or in Lisa Simpson’s case, shaping her to represent a certain political or social point of view).

Groening’s post-“Simpsons” cartoon women have consistently thumbed their noses at the late ‘80s and early ‘90s and early ‘00s sitcom practice of matching a hot, clever wife with a paunchy goofball who’s lucky to have her, and who’s there to disentangle him from the problems he causes.

Yes, Marge and Homer are essentially that very couple on purpose. And miserably, in a number of episodes and over many years, Marge dims her light in order to maintain a "traditional" American view of motherhood and family harmony, and so as not to make Homer feel too inadequate.

Even so, Marge has boosted Lisa time and again when she gets knocked down. Mama Simpson is certainly more inspirational than Lisa’s “MacGyver”-obsessed aunts or most of the other women in Lisa’s life. That dynamic works, which is probably why some version of it exists in a number of primetime animated series that came in the wake of “The Simpsons,” notably Seth MacFarlane’s Lois and Peter Griffin on “Family Guy” and Stan and Francine Smith on “American Dad.”

“Futurama” leaps away from that concept, presenting male and female leads who aren’t necessarily destined to be together, no matter how much 20th century pizza boy Fry attempts to win the heart of spaceship pilot Leela. And yet on that show, Leela is the action hero rescuer to the feckless Fry and her other companions.

Fry, meanwhile, is free to behave as stupidly as he wants without incurring negative judgment. Leela keeps them alive by keeping her head on straight and, yet again, she’s usually, the smartest person in the room.

Bean, meanwhile, gets to be Leela and Fry, to have the will of Lisa, the soft heart of Marge and the devious streak of Maggie. She also gives viewers a reason to appreciate the array of able women with agency, albeit ones beset by dullards, that Groening and his writers have developed over the decades.

She’s evidence of an evolution, no doubt. Even so, we should be wary buying into this rah-rah feminist framing of Groening’s oeuvre for similar reasons to those that eventually came back to bite “The Simpsons” in the form of its Apu problem, which began in writers’ room full of white males. Those guys loved finding jokes about the foreignness of Apu, and couldn’t see anything wrong with what they were doing.

And there’s a chance of making a similar mistake in this writers’ room, which is also predominantly white and male and tasked with shaping a tale with a feminist bent.

Granted, there’s a higher percentage of women working on scripts for “Disenchantment” than employed on other Groening projects: out of the nine “Disenchantment” writers staffed under Groening and fellow executive producer Josh Weinstein, three (Jeny Batten, M. Dickson and Shion Takeuchi) are women.

Given “The Simpsons” reputation for maintaining a “boy’s club” atmosphere in its writers’ room (by my admittedly non-definitive tally, I counted 11 women on a list of 118 writers credited over the 29 seasons the show has aired), a 30 percent female writing staff is an improvement.

Get it up to 50 percent, guys, before you can legitimately crow about the show’s feminist cred. Otherwise “Disenchantment” remains open to a whole other world of concerns.

"Simpsons" writer Mike Reiss explains how and why the show handled criticism about the Kwik-E-Mart owner.